To this day, despite the prevalence of social media, adoption has been slow among large enterprises. Yes, some have been jumping on the bandwagon but many have yet to be convinced that Social Media will do anything significant to develop audience or revenues.

Having worked in both sectors, I’m convinced that the gap between large corporations and small business involves:

Here’s an infographic from Flowtown that uses data from Forrester: Traditionally small businesses have leveraged advertising dollars to grow their business. In the same vain, they were reluctant to try social media to engage customers. Over 2/3 of businesses saw no real value in using any of the main social networks. 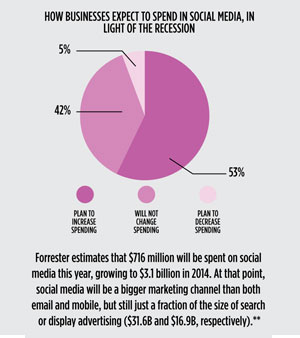 How times have changed: Now advertising has been put on the backburner to make way for the evolving Customer Relationship Tools: Email and Social Media. The economic crunch has put a squeeze on the dollar and SMBs are cautious about risk/return from the traditional media.

Large businesses still have the dollars to spend on traditional TV and other mass channels. These have proven awareness results. Their risk/reward has been satisfied. In addition, because of the nascency of social media, they are reluctant to put some investment in this channel simply because they have the means to generate stronger awareness, and they are unconvinced that the emerging media will net the same results. In terms of adapt-ability, new media is still unproven. It also defies traditional “ownership” instincts by requiring the commitment of time and money to forums where businesses and customers are on an equal footing. Unless there are maverick marketers willing to put their reputation on the line, more often than not, most will follow the market behaviour.

Small businesses have to ensure their dollars are stretched to maximize potential leads so they are unwilling to accept the low performance rates of online media (average .15% CTR for standard banner) with the level of investment required.

I’ve worked for a start-up company where the small marketing budgets did not match the million + dollar budgets I previously managed. The dollars allocated to marketing would be able to buy a few months of “awareness” at best. I resorted to social media and PR as an adjunct tactic to develop a some kind of sustainable presence within market for the remaining months of the year. As a start-up business, the price was too high to put all my eggs into one big advertising budget to launch our company, however given the low investment required for social media, I had absolutely nothing to lose.

However, I was not prepared for the onerous task ahead – the amount of elbow grease needed to build and sustain a presence online: finding audiences through search; curating and creating content; maintaining activity in all relevant platforms including blogs; finding influencers to help amplify the company message (s). I was also not prepared for the long wait for the “tipping” point when all my efforts would yield us traffic and new customers… which it eventually did.

Small businesses are willing to put in the time to engage because they have no choice. It’s out of this necessity that they are starting to see the fruits of their labour. They are also nimble, and therefore willing to venture into new ground to determine what sticks.

I love success stories like Freshbooks, an online invoicing and time-tracking service targeting freelancers and small businesses, which literally used engagement strategies to help grow its user base by over 150%. Here’s the case study. Their campaign was ongoing with no gimmicks: “The true success of FreshBooks has come from its commitment to forging real relationships with customers, potential customers, and others.”

Everything Freshbooks did was all about customer engagement:

The results:  Today Freshbooks has well over 800,000 users, and it’s through the relationship with the users that they’ve been able to grow their company in short order.

Now, from what Freshbooks has told me, they have budget to spend in more traditional methods of media: like radio and print…. maybe not TV……. at least yet not 🙂