To get from their kitchen table to the global marketplace, an Ontario-based husband-and-wife team relied on their own experiences, the services of independent technologists and software developers, and thousands and thousands of voices.

From an early idea sketched out on a napkin, they’ve built what’s called the largest online voice-over marketplace in the world. Voices.com coordinates, produces and delivers recorded verbal announcements and narration services to companies around the world, many of them familiar names in the advertising, media and entertainment industries.

Company founders David and Stephanie Ciccarelli both started their career path in related fields; having graduated from the Ontario Institute of Audio Recording Technology to run his own small studio, David first met Stephanie when she came to record demos of her music. 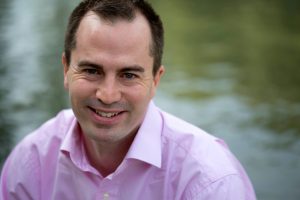 When a client asked David about hiring a female announcer for a commercial production, he reached out to see if she wanted to come in and record.

So coincidence and happenstance got them together; he happened to know of her vocal abilities, she happened to be geographically close to his studio. Both knew that there had to be a better way to find, hire, record and fulfill a voice project: if you didn’t know about a certain needed voice artist, how would you find them? And then, having found the right talent, how do you record them if they don’t live nearby?

The Ciccarellis felt that harnessing the best of online connectivity, digital audio technology and Web-style search techniques could provide some answers, David recalled. “We knew that voice actors needed a much larger platform to record and audition for jobs, beyond the traditional method of accessing their local recording studios and talent agencies. Stephanie and I wrote our idea down on a napkin at our kitchen table, sold my recording equipment, and bought our domain name. From there, we began to provide voice actors with a website that gave them access to voice-over jobs from all over the world.”

He’s not kidding: Voices.com handles artists who speak over 100 languages and dialects, and the online service connects clients (who provide text descriptions of their job opportunities and project requirements through the Voices dashboard) to artists (whose skills and abilities are described in a searchable database that Voices maintains) no matter where they reside.

Voices.com is still located in London, Ontario, but now it occupies a recently renovated office spanning some 45,000 square feet. It’s home to a team of nearly 100 employees, David described, and a fully outfitted recording studio that’s used to record educational webinars and instructional podcasts for customers. (Both David and Stephanie speak, write and blog about the voice over industry, and they provide tips to both artists and clients on how to enjoy success in the field.) 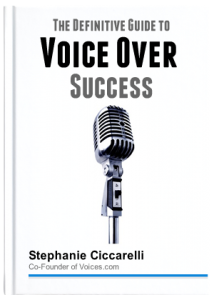 Both David and Stephanie provide tips to artists and clients on how to enjoy success in the field.

“As an online marketplace, none of the actual voice-over work is done on-site, instead it is all done from voice actor’s home studios in the 139 countries we currently operate in around the world,” David added.

Don’t be surprised at the size and volume of voice work that’s out there.

“Think about the voice of the app on your phone, the narrator for that nature documentary you’re streaming, or even the voice on the elevator announcing the next floor; these are done by voice-over actors. Websites use our services quite often; a successful audio presence on a company’s website can be extremely influential in how their customers think and feel about their brand. Voice-over work is all around you – anything where you hear a voice but don’t see a face is potentially done on our website.”

So the work was clearly available, and the opportunity obvious to anyone working in the field. Even so, the company faced tech challenges not uncommon to any start-up, no matter the sector in which it operates.

“A problem that most start-ups face is that the company is not big enough to hire an entire development staff from day one,” David describes. “With the IT sector growing, more and more people are becoming specialists in different fields; a start-up needs to find someone who can come in as a generalist.”

By connecting to the skills and abilities their company needed but did not have in-house, the Ciccarellis were able to have a number of proprietary technologies developed to deliver their service, such as an interactive platform that lets clients post jobs and receive custom auditions based on their specifications, just like making a Web search. A secure escrow payment service that gives both artists and paying clients some peace of mind along with the sound of voices in their headset was also developed. 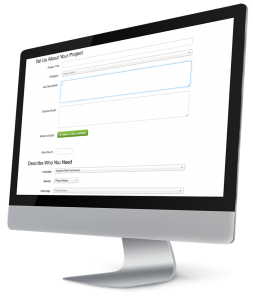 Proprietary technologies were developed to deliver the Voices.com service, such as an interactive platform that allows clients to post jobs and receive custom auditions based on their specifications.

“As Voices.com grew, we were able to rely on this person to guide our decisions in the moment, as well as set us up to be in a strong position in the future. There are so many situations that arise in a start-up that you need a jack-of-all-trades who can make crucial decisions for your company, such as whether to utilize cloud computing or to build our own infrastructure.

“We were also able to rely on this person to manage the department as it grew, advising us when, who, and for what positions we needed to hire for as we evolved.”

The Ciccarellis also connected with local technology accelerators and start-up incubators to help them get the additional expertise their company needed during its crucial growth period.

And what of its future?

David notes that technology can provide as many challenges as solutions: “The rise of Siri and other synthetic voices is a big deal in the voice over industry. As these systems get better and more evolved, the industry is only going to get more competitive. The biggest setbacks for these synthetic voices, and what allows Voices.com to differentiate its services from synthetic voices, is the limitations in personalization that is available to these systems. Most clients want a voice for their projects that will connect and resonate with their customers. How a talent reads the script and uses their voice to connect with the audience is key.”

That connection must be human, he announces with confidence and conviction. 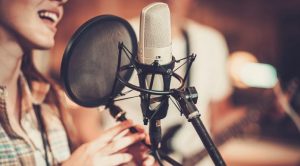 How a talent reads the script and uses their voice to connect with the audience is key, says the co-founder of a Canadian company providing online voice services worldwide.