This year’s Consumer Electronics Show (CES) is once again heralding technology trends for the coming year if not acting as the proving ground for emerging technologies.

Microsoft CEO Steve Ballmer showed off  his HP Slate PC during his  keynote speech, demonstrated the PC version of the Amazon Kindle software, and Windows 7’s multi-touch interface as well as web surfing, multimedia and gaming features. Slate PCs, which are slimline 5`inch to 11`inch screen tablet computers, turned a lot of heads perhaps because of the buzz surrounding the rumoured but still-unannounced Apple ìSlate tablet.

Microsoft has been a proponent of tablet computing for at least 10 years. The company’s TabletPC OS from 2001 and UMPC (Ultra Mobile PC) initiative from 2006 were much-hyped in their day, but failed to capture the public’s attention due to expensive hardware, abhorrent battery life and limited real-world use. But Windows 7, Microsoft newest operating system standard, now incorporates a lot of the earlier pen and touch based technology developed for these devices. The latest Slate PCs  boast better battery life, stylus-free multi-touch features and better wireless integration with SIM card slots and  advanced Wi-Fi capabilities.

On the show floor, visitors were most impressed by Lenovo’s IdeaPad U1 hybrid sub-portable, which merges a netbook with a slate. In netbook mode, the IdeaPad U1 is a full-featured mini-notebook running Windows 7 on an Intel Core Duo processor that can muster 8-hours of battery life. Disengage the 11.6 inch screen from the keyboard, however, and you have a Linux-powered Slate PC running a frugal ARM Snapdragon processor, good for 6 hours of web surfing. This innovative, double-duty bundle will sell in June for US$1000. 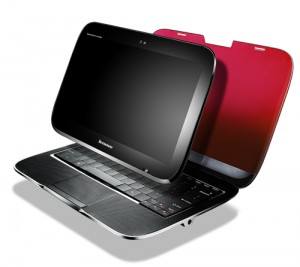 Lenovo`s U1 Hybrid is a slate and a netbook

Not to be outdone, Dell also brought a five-inch Android slate device that looks very similar to a giant iPod Touch – and which is rumoured to have a SIM card slot as well as a 5 Megapixel camera. Dell declined to provide other details on the device or if it is scheduled for release anytime soon. Other slate devices revealed during the show were also seen from Compal, Freescale and MSI.

On the eBook reader front, a number of competitors to Amazon’s Kindle, Barnes and Noble’s Nook and Sony’s Reader were also unveiled, showing that the last year’s electronic book frenzy isn’t letting up.

Spring Design, meanwhile, announced a partnership with Borders bookstores and showed off the Alex reader, which blends a reader with the Android OS on two screens, a 6 inch viewer plus and 3.5 inch color LCD for navigation.

It was the Skiff Reader from Skiff, LLC and Marvell (pictured) with its whopping 11-inch reader that drew the most attention. Aside from being the largest reader ebook reading device it is also the thinnest at a quarter of an inch. Skiff will be sold in partnership with Sprint and is geared towards large-format magazines and newspapers rather than books. Skiff is backed by Hearst Corporation, the mega publisher that announced digital editions of its major publications to electronic-book format late last year.

RIM Presents Another Addictive Quality for BlackBerry at CES