It’s all about exploring – and exploding – social trends and tech advancements in the mobile space.

Exploding, in that it started with the Hack-a-Thon and a look at how code can change things (one hopes for the better, of course).

Exploring, in that we’ll have a chance to look at ways that portable devices and application development here in Canada is leading us all to a brave new mobile world, one the organizers call Mobile 3.0.

It is Mobile Innovation Week in Toronto, and it is on now across the city.

“Canadian talent and innovation are rarely exposed to local and international audiences – even ‘tho we are a mobile industry powerhouse,” said Michael J. O’Farrell, founder and co-producer of the conference. “This event showcases our mobile prowess to global mobile industry leaders, while also giving Canadian organizations the tools and information they need to take advantage of the emerging mobile universe.”

For the rest of this week, then, various events around Toronto (don’t get confused with by TIFF crowds) will turn the city into the centre of the mobile universe.

O’Farrell cites several stats that explain his energy and enthusiasm for the mobile industry in this country. First, he notes that more than 23 million of us (at last count in June) are wireless phone subscribers.

He then notes that Canada’s wireless carriers invest more than $1 billion in an expanding mobile phone communications infrastructure each year, so coverage is now available to 99 % of the population.

But as much as the market matters, O’Farrell says the key to innovation is the critical mass of technologists, developers, system integrators and content creators that live and work here.

Speaking of major mobile and technology organizations like Research In Motion on one hand, he itemizes the long history of mobile industry here, but he’s also well aware of a number of smaller but no less impactful firms on the other.

Toronto’s mobile app developer Five Mobile, for example, together with the sports TV channel The Score has developed one of the most popular smartphone sports app worldwide – they are competing with the big boys, like ESPN, in a crowded and lucrative market.

He mentions another successful development company, Spreed, which is leading the way with its news reading app, and he goes on to include Polar Mobile and Extreme Labs as just a few of the great examples of the mobile mark that developers from this area are making worldwide. 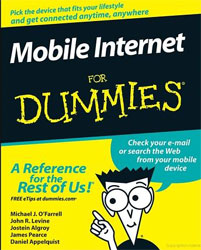 O’Farrell, by the way, is one of the authors of Mobile Internet for Dummies, a great reference book (with online resource centre) for not just picking a mobile device and service provider, but also using and developing great mobile applications that can be used in retail, marketing, industry and health care, among other sectors now making great use of smartphones and the customized software that run on them.

So, the week is designed to expose companies like those to even greater opportunity, while opening the door to newer and up-and-coming companies moving in mobile.

It’s a packed week with more than 150 speakers set to speak, and more than 100 interactive presentations set to interact. Workshops and other moderated sessions are also planned.

Organizers say that, based on last year’s attendance, they’re expecting more than 2,000 folks will participate, coming from across Canada, the US, the UK, Germany, Brazil and other international locations.

O’Farrell is one of the events co-chairs, along with Shawn Pucknell from FITC; Gary Schwartz of the Mobile Entertainment Forum Americas and president & CEO of Impact Mobile; and Ian Kelso, president & CEO, of Interactive Ontario, the province’s interactive media association.

Of course those guys had a lot of support and help from mobile and digital media companies and a mix of national and global organizations, including: the Government of Canada, the Canadian Wireless Telecommunications Association (CWTA), the Information and Technology Association of Canada (ITAC), the Canadian Interactive Alliance, the Cross Innovation Academy, the Digital Arts and Technology Association (DATA), Flash in TO, Ad Lounge, Mobile Dev & Design, the Mobile Entertainment Forum (MEF), Mobile Monday (MoMo), the Ontario Media Development Corporation (OMDC), RGD Ontario, Wireless Industry Partnership (WIP), and Wavefront AC.

It is produced in cooperation with the City of Toronto.