It’s been a rough couple of weeks for Canadian Internet service providers, but maybe they think that’s OK – considering that a lot of the uproar and protest over broadband billing practices is happening online.

What with online petitions, special webcasts and Internet–based forum presentations, the furor over usage based billing may be causing a spike in usage! 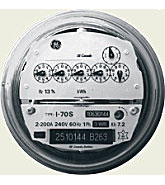 Data consumption on the Internet will be billed and metered just like hydro.

For example, this coming Friday the 25th, a special public forum looking at Internet-related issues – like broadband access, online privacy, IPv6 adoption, social media and more will be webcast in English and French, organizers have announced.

As well, the Canadian Internet Registration Authority (CIRA) will present the findings from a national consultation on how the Internet is run.

That’s where the rough week comes in.

Ever since the country’s telecom regulator, the CRTC, issued its various rulings and decisions about UBB, usage based billing and related practices by Internet Services Providers, well, the fan has gotten very dirty!

The CRTC itself has been spanked down, as the federal government (which appoints CRTC members) disagreed with its regulator’s position and called for a review of its decision. That triggered an appearance by the CRTC Chair at government committee hearing, which itself was webcast.

The government’s review and CRTC return to the topic continues.

Meanwhile, the ISPs are using up some of their own bandwidth on the issue.

Shaw, for example, wants to position itself out front of the issue, and it the western Canadian provider says it will delay any UBB increases, while it conducts in person meetings and information gathering sessions about the issue.

Shaw has created a new web portal with information about its position, and dates for the Internet consultation it will be holding.
Bell is also online with words about usage billing and data caps, with an Internet posting that acknowledged that its own online tools, used to track data consumption by customers, was faulty.

“We have identified an issue that may have caused Internet usage shown on this site to be incorrect in some cases. In order to ensure we provide reliable information to all of our clients, the usage tracker will be unavailable while we resolve the issue,” said the message.

A spokeswoman for Bell said that the tracking error affected only a small number of Bell customers, and that new traffic management software was being implemented.

The Montreal Gazette reported that Bell customers complained that the Internet usage tracker was overestimating their Internet use by between 50 and 200 per cent and cited the problem as another reason why UBB should not be allowed.

Rogers, too, has had to address its traffic management protocols, in direct response to the CRTC, which asked the company to be more forthcoming with its policy descriptions and disclosure practices.

In a documented response to a CRTC query about whether P2P download speeds were being impacted by Rogers network management, the company’s legal counsel explained that “Rogers does not manage download P2P file sharing traffic; however, some P2P applications will limit download speeds based on various factors, including the amount of P2P upload traffic and protocol acknowledgments. These factors may be responsible for customers experiencing slow download P2P file sharing speeds.”

“It is time for more transparency, both from the CRTC and the major telecom companies that control the Internet market,”  OpenMedia.ca’s national coordinator Steve Anderson. “If  the CRTC will go so far as to impose a pricing structure that so clearly favours big industry over citizens’ interests, we will not only fight that decision, but also demand to know the reasons for it.”

The ‘we’ Anderson refers to includes some 400,000 people who have added their names to an – what else? – online petition seeking open Internet access and fair pricing for all who use it.

“This underlines the whole problem — there is no accountability or transparency,” Anderson added. “One of the reasons people are so upset about this is because they have experience with this sort of thing with cell phones.”

Although the Internet has become an integral part of the Canadian economy and society, the CIF and webcast presents the first opportunity for Canadians to discuss how it is developed, deployed and governed.

The results of the consultations, online discussion and the national event will be presented to the United Nations coordinated Internet Governance Forum, a venue for nations to discuss the future of the Internet, later in 2011.

No doubt transmitted by broadband!