The newest one is basically a one-man band. Its operation is at home, in the basement. A key motivation – Mom!

Now, don’t be fooled by the familial description, or the start-up configuration.  This is a very sophisticated company, and it brings more than 20 years’ industry experience to the table.

Evoshift Communications Inc. is based in Victoria, BC, but it has plans that reach across Canada.

The company feels it can compete with the big players in the wireless market, especially through lower pricing on its business services. It launched its new wireless service last month, with a splashy press event in downtown Victoria’s Atrium building — right next door to communications giant Telus.

Right now, the company is targeting small- to medium-sized businesses, those located within a defined five kilometre area in the downtown business section of Victoria. 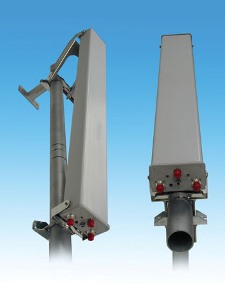 That’s because Evoshift owns its own network – base station, transmission tower and everything!

Evoshift works on WiMAX, an evolving IP technology that enables delivery of both fixed and mobile broadband wireless access and related services.

Using Evoshift’s service, an Internet connection is set up between its base station and a customer’s business. Phones, Internet PCs, smartphone or tablet devices are able to run off a wireless router located in that business.

It performs like Wi-Fi networks in terms of available data rates, but it has the coverage and QOS (quality of service) of cellular networks.

It’s based on interoperable, almost open, technical standards, so both network management and application development is easier than with more proprietary technologies such as LTE.

And although some observers feel WiMAX can be ramped up to deliver HD video and wireless IPTV, MacKenzie says his company does not anticipate the need for “super high speeds. We’re not doing any heavy lifting for our clients right now, but there is the need and ability for the occasional video conference.

“We’re hitting the ‘sweet spot’ with rational pricing and good service for small to medium businesses. It’s a competitive offering, with five Mbps download and one Mbps upload right now.”

MacKenzie said his desire to reduce the cost of Internet and phone came after seeing his mother’s interior design business’ phone costs pass $450 per month.

“I guess I’m a bit sentimental,” Mackenzie said of his desire to help Mom – and then his decision to return to Canada to help others. “Mom’s business is in Winnipeg, and I was working overseas. But when I saw her bills, and all those costs, I just shook my head. Being in Oslo, for example, we had IP telephony years ago. There were more options and better pricing than anything I saw here. Small business can operate like a bug business, with greater capabilties and less costs, if the right technological solution is applied.

I decided to take that on…” 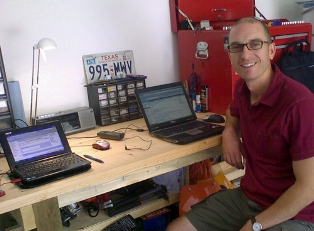 Now, MacKenzie is not really a one man band.

First of all, he has good partners and enough first round private capital to get the company off the ground.

Second, there are five valued employees – for now.

There are important technology partners – he spent a year or more working with different vendors, keeping up with fast changing standards, identifying the right WiMAX equipment and the right specifications for his vision of a wireless urban area network, one that would deliver broadband Internet and telephony services.

And, there’s his own wealth of industry and global experience to draw upon, in both start-up organizations and multi-national enterprises. Early on, he had a great job at and key management role in a company called Net4Call, eventually bought up by Oracle.

Once there, he had two important roles that clearly pointed to his future: Business Development Manager (BDM) and Technology Sales Manager (TSM).

When we spoke there were but ten or twenty customers for Evoshift. But MacKenzie was more than busy just answering interested inquiries, many coming from well beyond his coverage area.

He acknowledged that he plans to roll out his business idea elsewhere in Canada, and said he did hold the necessary licenses in other cities, but he would not name them at present.

So for now, it’s only Victoria businesses that can get plans with Evoshift that combine Internet, phone and smartphone access, starting at $79.

The company offers related services like automatic attendants, conference calling and directing callers to a number within a company, like a virtual switchboard.

Businesses can save money by having just one phone number, but it’s connected to a web-based virtual call management system (press 1 for Ronnie, press 2 for Auria, etc.).

MacKenzie added that an Evoshift phone number can be accessed from anywhere in the world, although long distance charges do apply.

The company also works with an iPhone and an Android app to allow mobile device users to run their smartphone parallel to their business phone.

As MacKenzie sees it, one Internet subscription equals a telecom solution with a multitude of opportunities.