So they call it a tool to create multi-generational family histories. 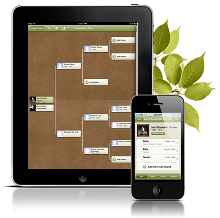 True enough, the new iPad app from Ancestry.ca is that, but I also see it as a phantasmagorical device for telling stories; maybe even making movies.

Like, anyone want to dig into the connection between Ellen and Madonna?

How about Obama and Palin??! Now there’s a novel I’d like to read!

Genealogists say there is a family connection between them, believe it or not. As most anyone who does research along these lines knows, there are secrets in every family!

How about this one, a little closer to home: Warning, this story contains material that may be dangerous to beer-drinkers.

John Jr. was very young and apparently just out of his first apprenticeship when he took over the Labatt brewery after his father passed away. He married a woman named Sophie, and settled near London, ON. In sad and somewhat mysterious circumstances, Sophie’s 1906 death record indicates that she was poisoned.

I think I need a drink after contemplating that one! 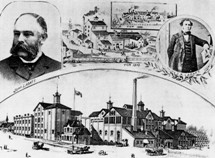 Yes, Ancestry.ca has released its new iPad app, and it builds on the already engaging and well established website, taking it one step further with enhanced abilities to discover, preserve and share family history – your own, or perhaps someone else’s!

The free app, which can be downloaded from iTunes, was developed specifically for the tablet experience, and it is amazing the way the great looking iPad screen presents a multi-generational family tree, branches filled with names and details associated with colour photos, scanned documents or other family records.

Taking the website one step further, quite literally, the app’s user interface and the device’s portability means you can rather easily conduct field research, collection and documentation.

That’s a handy tool when tracking down a family tree though old library records, or even a visit to an old cemetery.  App users and Ancestry.ca members can take photos, record memories, edit vital information, document life events and organize other information.

There is a scaled down version of the app for the iPhone, and you can still navigate a family tree and look at records associated with that tree ahead of time, but really, the iPad version is much more compelling for its look and its functionality. Both apps allow you to share information, including a family tree, photos and other recorded information.

“We are committed to leveraging the latest technology to make what we offer on Ancestry is easily accessible and enjoyable to use for family history novices and experts alike, whether at their desks or in the field,” agreed Roger Dunbar, Ancestry’s country manager for Canada. 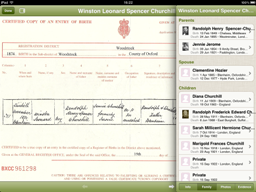 Family documents, such as from the famous Churchill family, can be displayed.

Ancestry.ca launched back in 2006, and since then it has become the leading Canadian family history website, in terms of its 128 million family history records. Members continue to join and add new information.

The site, and now by extension, the mobile apps, offers exclusive online access to the country’s Census records, its Inbound Passenger and U.S. / Canada border crossing data (immigrant stories and who landed where and when makes for fascinating reading, really!) and other important records from Ontario, British Columbia and Quebec.

The site is in both English and French (and the new app supports French, German, Italian and Swedish).

It’s part of a global network of Ancestry websites (wholly owned by Ancestry.com Operations Inc.), with a total of some six billion records. A recent count showed more than 20 million family trees created, with more than two billion names and 45 million photographs uploaded.

(Actually, I kinda wonder why there isn’t a Facebook app for Ancestry, or maybe a Foursquare plug-in? Look how even the iDevice family tree just keeps on growing, so why not an ancestry app for gadgets? Hmmm…..)

Seriously the new app has a number of useful features, including an automatic sync for any mobile changes you make to your family tree, back to the online website version. The app does support backgrounding, again making good use of what the iPad device itself can do.

But there is a caveat.

Some users are already enjoying the app, but I’ll admit at first I was confused by the App Store online warning:

IMPORTANT: WE ARE AWARE OF A BUG THAT COULD CAUSE LARGE TREES TO FAIL …

So folks who have already done a lot of work on their family tree might want to wait for a fix, or make sure their work is doubly protected and back-up before downloading the app.

Are Canadians too polite to succeed on the Internet? Reflections on Podcamp TO 2011