As the school year winds down, the future goes on display, in both physical and virtual venues. And it looks great, but we need more of it!

The future, in this case, is represented by the digital portfolios of students enrolled in interactive and multimedia college programs in the Greater Toronto Area. They will be the web designers, game developers and new tech gadget users of tomorrow.

For now, their portfolios were shown in publicly-accessible venues, not school classrooms.

That’s so prospective employers, other designers and developers, and members of the general public, including friends and family, could see and interact with the student creations and class projects on display. 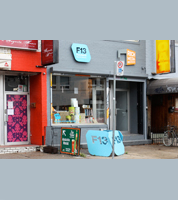 For these programs to reach the audience they need, the place to be is downtown. For example, the Humber College Interactive Portfolio Show showcased the Multimedia Design Diploma Program’s graduating class and their work in the heart of Kensington Market.

The school itself is in Toronto’s west end, but the students moved into a place called Function 13. It’s a digital gallery, reference book shop and home to FITC, Flash in the Can, the industry group that promotes Flash activities and events.

Over on the fashionable King St West strip, student work from the School of Creative Arts and Animation at Seneca College was on display at The Spoke Club, a trendy private members club specially set up for the occasion.

Of course, student portfolios, really, are more about getting a job as they are showing off cool creations in cool locations. And while some of the students do have gigs already lined up, many others are seeking their first paid position now that classes are wrapped up.

Seneca is is one among more than 85 digital or multimedia type programs listed at the 28 publicly funded community colleges in Ontario. Add in private schools and universities, according to some recent statistics, there’s more than 13,500 students enrolled in computer and information technology programs (including specialty topics like gaming, animation, multimedia, computer science, computer programming and software engineering programs as well as related postgraduate programs.

Sounds like a potentially crowded job finding landscape for those multimedia and interactive grads.

But, chew on this for a minute:  According to Paul Swinwood, the head of the industry association known as ICTC, the Information and Communications Technology Council, the demand for more ICT employees will grow over the next five years.

Taking into account the expected expansions in the GTA alone, he says there will be 68,000 places to be filled.

Ontario will have the lion’s share of Canada’s predicted overall need for about 170,000 new workers, he adds, explaining that education and training is an important way to meet the need.

But, he warns, from the current curriculum and seat allotment in the schools and post secondary education institutions around Toronto, there will be 5,000 tech program graduates per year.

So the portfolio shows are also a recruitment campaign, a way to keep the flow going both into and out of the digital media classroom.

Seneca reaches out via the iPad

In a show like Seneca’s, for example, that need partially explains the new and somewhat glamorous approach taken, like a bridge between traditional art training and successful digital practice. 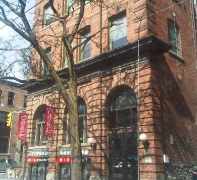 Occupying a few different rooms and an entire floor at The Spoke Club, Seneca set up a number of custom-built computer workstations, where demo reels and work samples from across its media program landscape were shown on giant widescreen HDTVs.

Student work from the Animation, Documentary Film, Photography, Illustration and Game Art programs (among others) could be touch screen navigated using newly developed iPad apps, created specially for the show by students themselves (with the idea of reusing the basic app template over and over again in future shows).

As SCA program Chair Mark Jones explained, the school agreed to try the open invitation approach to the portfolio show, rather than the standard on-campus industry model of previous years, in order to celebrate and promote the work in a new light.

The venue itself, located within walking distance of several of the city’s top digital development shops and media boutiques, made attendance by business professionals and corporate recruiters easier and more convenient. 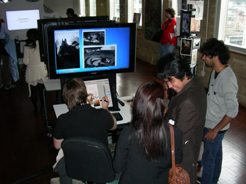 Individual workstations were set up in The Spoke Club to show Seneca College student portfolios.

And while the student creators were not necessarily at the show, Jones noted, several methods of post-event contact and follow-up were put in place. It’s seen as a way to lessen the pressure on students by letting their work speak for itself, and on the attendees, by letting them navigate the collections as they saw fit.

The approach seems to have worked.

As Jones reported after the event, “[W]e had secured 27 job placements for the students and about 20 internships,” and he expects more to come once they’ve followed up with some of the other employers who attended.

Over at Function 13, Humber students also welcomed all attendees to their portfolio show, prospective employers or not. In this case, each student acted as a personal guide though their online portfolios, displayed on laptop PCs hooked up to the ‘Net. The individual portfolios as well as a slick video can still be seen on the event website.

The students of the Multimedia program (of course, other courses are offered at Humber, but this show focussed on multimedia and interactive work) learn interface design, motion graphics, web coding, streaming, video and sound editing, graphic production and interactive design.

Those skills were put to the test in personal portfolios, as well as real-world sites developed by the students for operating companies, not- for- profit organizations and other online entities.

Students use industry-standard software such as Adobe Creative Suite and Apple Final Cut Pro, as well as current technologies such as HTML, CSS, JavaScript/jQuery, PHP and ActionScript 3.0 to create their work.

As such, they are learning their skills on the battlefield, if you will, especially that war raging between different companies supporting different online standards, such as Flash or HTML 5.

Most students agreed that, as Flash is already stalled in and compatible with the greatest number of web browsers, it’s pretty hard to compete with it – or development without it.

HTML 5 is still fairly new, they pointed out, with maybe 40% of browsers supporting all it capabilities (many are supported now, but not all).

HTML5 is a seen by many students as collection of tools and functions, including things like JavaScript, doctype and semantic tags, while some include Canvas, GeoLocation & CSS3 in the HTML5 category.

But no one seems to dispute that Flash is the best way to deliver high quality video online (and Humber, like many other training institutions does have dedicated programs for it). James Cullin, the Program Co-ordinator for Interactive Multimedia at Humber, noted that it’s one of the strengths of the program there, and it’s seen as a big draw for creative students.

Student portfolios often include real world as well as classroom creations, based on those all important internships or co-op placements (sometimes, it’s a student’s own initiative in getting additional design or development experience that leads them to these assignments).

So, the Humber portfolios that intersected with Yonge St. drew my attention. By Yonge Street, in this case, I mean the “Yonge Street: Toronto Rock & Roll Stories“. This is a fabulous new website developed as an online companion to the TV documentary series that recently aired on Bravo, tracking the history of music in Canada, and particularly the music that could be heard along Yonge St. in the 1950s and ‘60s.

The website is a Flash rich interactive online archive, full of personal photos and memories, celebrity interviews, musical snippets and much more, all created by the web team at Design Axiom, a top Toronto design and development firm. For example, click on “The Locations” and you can zoom into pictures of the old venues and watch them morph into the location as it appears today.

As it happens, the company works with many Humber students and grads, and it is not afraid of putting them on demanding, high profile assignments like Yonge St.

As Design Axiom’s Tom George sees, it, the need is for creative designers with strong programming skills.

As he wrote on the company blog, “[T] he number of students who come out of computer science programs with knowledge or ActionScript or Flash is infinitesimal. But the programs that exist in the community colleges that teach multimedia development skills don’t … teach computer science and software engineering…. [A] solution to this problem is to basically count on getting great multimedia developers out of programs like Humber’s Multimedia Design program and then put them through an apprenticeship, starting with their internship, and if we end up hiring them, that goes on for a couple of years.”

It takes a long time to be a top digital designer or web programmer. Success is as much an artistic skill as it is a practical science.

The tools, techniques and technologies are always changing, and so the good students, top teachers and best bosses all agree, learning about this business is a lifelong activity.

And the top schools are the starting point for a career, not the end point.

Even if there are thousands of jobs to be filled, the most successful candidates will always be students in a way.