His life is being celebrated for its creativity, accomplishments, and commitment in support of open information and an open Internet.

His death has unleashed an online firestorm of commentary, criticism and community. 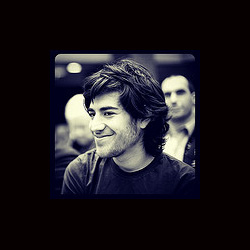 The photo of Aaron Swartz is by Flickr user elizabethbw and used under Creative Commons license.

The cyber hacktivist group Anonymous has created a controversial online memorial for Swartz, and major academic institutions have launched investigations into the situation surrounding his untimely death.

Swartz committed suicide.  He was just 26 years old, but he had already contributed to the launch of major Internet companies and online organizations, and he had already run afoul of major governments and online institutions for his beliefs and actions related to an open Internet and an alternate view of current copyright legislation.

When he died, he was in fact just weeks away from legal action in an upcoming court trial that could have put him in jail for years, even decades.

Swartz was deeply involved in computers and computer programming by age 12, but he knew then that information sharing could and should be easier. Within a couple of years, he helped developed the infrastructure for RSS, the Internet information sharing protocol known as ‘Real Simple Syndication’.

Swartz also helped create and launch the technical architecture for the Creative Commons, the not- for- profit organization that provides protection and manages licensing for a wide range of digital content created by authors, artists, educators and more.

Swartz often referred to copyright as ‘the freedom to connect’ and so he saw restrictions placed on our ability to connect as ultimately anti-social. In the short term, he warned that copyright legislation could be the smoke screen used by corporations and governments to control any and all content on the Internet.

Those beliefs drove his on-going cyber- and social activism, and he continued to help launch and found organizations that would help develop his position.  Demand Progress, the Progressive Change Campaign Committee, watchdog.net, Open Library, Jottit, and Reddit.com are on the list.

He was instrumental, too, in helping launch online protests and petitions that were part of the STOP SOPA movement. Many around the world joined in the protest, from individuals to companies to web leaders, and they signed petitions denouncing the proposed legislation that many sarcastically called the ‘Stop Online Privacy Act’ (due to the law’s anticipated negative consequences).

The outcry helped defeat the bill, but the challenges to online freedom and copyright restriction was not over in Swartz’s mind. In fact, SOPA and PIPPA became CISPA and TPP, and the fight continues over Internet restrictions and information copyright.

So Swartz also put big money where his mouth was:

He took much of the wealth received from the founding and launch of Reddit and used it to acquire data and publish it in the pubic domain. Reports indicate that he spent a small fortune buying up documentation related to public domain case law data and then putting it online, where anyone could read it.

Swartz was criticized, investigated and very nearly prosecuted for those actions, yet he continued walking a dangerous line between the darkness and the light that he saw defining public access and excessively protectionist copyright legislation.

Swartz continued to publish documents online, and in 2011, the U.S. Attorney for Massachusetts charged him for illegally taking millions of documents from JSTOR, an online non profit aggregator of scientific journals.

JSTOR itself has now said it had settled any issues it had with Swartz, and that it was not a part of any prosecution (which it blamed entirely on aggressive U.S. Attorneys). JSTOR expressed “deep condolences’ to Swartz’ friends and family.

As do many who knew or never even met him – yet the distress and heartbreak that Swartz’ family now faces is, like Aaron himself, pointed and controversial.

They’ve published a powerful statement about his death, in which they say “….[A] criminal justice system rife with intimidation and prosecutorial overreach and [d] ecisions made by officials in the Massachusetts U.S. Attorney’s office and at MIT contributed to his death.”

In another online statement written about his death, BoingBoing writer and personal friend Cory Doctorow gives a more detailed account of Swartz’s life, work and times in a eulogy titled “RIP, Aaron Swartz” at BoingBoing.

Doctorow, too, noted the on-going prosecution that Swartz was facing, saying that it may have also sought to uncover any connection to Bradley Manning and the Wiki Leaks controversy over which Manning faces trial.

Meanwhile, in a message posted to an MIT webpage by Anonymous, the group is careful not to blame any organization directly for his death, but the group – echoing other statements – does write that “we all have” reason to work for the same ideals and goals as Swartz did.

Anonymous hopes for reform of “computer crime laws,” reform of “copyright and intellectual property laws,” greater recognition for “oppression and injustices,” and a commitment to a “free and unfettered [I]nternet” in its message, much as Swartz did during his life.

Swartz, in a speech he made last year, spoke of the on-going battle to define what can, what will and what will not take place on the Internet.  A video recording of the entire speech is streaming at Democracy Now!

The battle drove Swartz to make many achievements, to take many risks, and it’s possible he saw the battle ending in a way he could not accept.

The photo of Aaron Swartz  is from Flickr user elizabethbw and being used under Creative Commons license.

Official Statement from the family and partner of Aaron Swartz:

Our beloved brother, son, friend, and partner Aaron Swartz hanged himself on Friday in his Brooklyn apartment. We are in shock, and have not yet come to terms with his passing.

Aaron’s insatiable curiosity, creativity, and brilliance; his reflexive empathy and capacity for selfless, boundless love; his refusal to accept injustice as inevitable—these gifts made the world, and our lives, far brighter. We’re grateful for our time with him, to those who loved him and stood with him, and to all of those who continue his work for a better world.

Aaron’s commitment to social justice was profound, and defined his life. He was instrumental to the defeat of an Internet censorship bill; he fought for a more democratic, open, and accountable political system; and he helped to create, build, and preserve a dizzying range of scholarly projects that extended the scope and accessibility of human knowledge. He used his prodigious skills as a programmer and technologist not to enrich himself but to make the Internet and the world a fairer, better place. His deeply humane writing touched minds and hearts across generations and continents. He earned the friendship of thousands and the respect and support of millions more.

Aaron’s death is not simply a personal tragedy. It is the product of a criminal justice system rife with intimidation and prosecutorial overreach. Decisions made by officials in the Massachusetts U.S. Attorney’s office and at MIT contributed to his death. The US Attorney’s office pursued an exceptionally harsh array of charges, carrying potentially over 30 years in prison, to punish an alleged crime that had no victims. Meanwhile, unlike JSTOR, MIT refused to stand up for Aaron and its own community’s most cherished principles.

Today, we grieve for the extraordinary and irreplaceable man that we have lost.

Displays are all the rage at CES 2013

10 Keys to Social Media Success for your Company