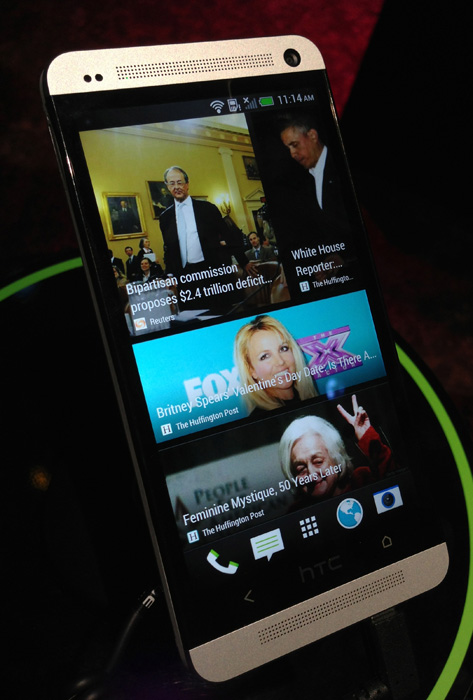 NEW YORK – The new HTC One smartphone announced today at an event in New York City will be the company’s new flagship Android handset, and is slated to be available in Canada as early as late March from Rogers, Bell, Telus and Virgin Mobile.

After a difficult year in 2012 that saw the company’s profits go down amid tough competition from the likes of Samsung and Apple, HTC boldly considered the One to be the “best phone ever made”. Indeed, it’s the first all-aluminum unibody smartphone, which was made possible by a “zero gap” in its construction. For an all-metal phone, it’s surprisingly light at five ounces.

The HTC One has a 4.7-inch 1080p display, runs on a 1.7GHz quad-core Snapdragon processor, 2GB of RAM and offers either 32GB or 64GB of internal storage. It comes with Android 4.1.2 Jelly Bean, LTE connectivity and NFC (Near Field Communication) as well. The rear camera is 4-megapixels, while the front is 2-megapixels, and is the same ultra wide-angle lens that was first seen in last year’s HTC Windows 8X phone.

The low megapixel count might seem like a step backwards, except the camera uses what HTC calls “UltraPixels”, which are supposed to capture 300 percent more light than regular pixels. It appears to be similar to how HDR captures three images at different exposures and then blends them together for the best photo.

The camera’s focus is on HTC Zoe, a feature within the camera app that captures both high-res photos and short video clips simultaneously and processes them into a montage, complete with background music, crossfades and transitions. The order can be changed using a “Remix” button found in the app.

The second major feature is BlinkFeed, which changes the “face” of the handset on the software side. Instead of a regular Android home screen, BlinkFeed is a continuous feed of information that can come from a wide range of sources, be they news, sports, entertainment and more. The feed is highly visual, with photos related to the articles and stories cut from the headlines. Facebook and social networking information can also be embedded this way, too.

BoomSound is a renewed focus on the Beats Audio integrated into the phone. Beats remains but has been enhanced by upgrades on the hardware side, particularly through the stereo speaker grilles found on the top and bottom of the front of the device.

SenseVoice utilizes the dual microphones inside to improve audio recording and phone call quality by measuring and monitoring ambient sounds around the caller. The added benefit to the dual mics is improved audio recording, especially for events and home movies.

Sense TV uses the infrared emitter found at the top of the handset to control a TV. The accompanying app also offers quick access to content via icons based on specific shows and movies. Users need only tap one to see showtimes and go straight to the broadcast. HTC confirmed that this will work with Canadian cable and satellite TV providers.

The phone will launch in late March, though no pricing was announced. It will come in either silver or black, and be available from Bell, Rogers, Telus and Virgin Mobile.

Does Our Data Need a Canadian Passport?