Multi-million dollar technology investments have made Nova Scotia one of the most connected jurisdictions in Canada and in North America.

Tourism and agriculture are industry staples, beautiful scenery and welcoming residents are noted calling cards. But Information and Communication Technology, ICT, is one of the province’s fastest growing sectors. That economic growth runs along a high speed Internet network that now extends throughout the province. 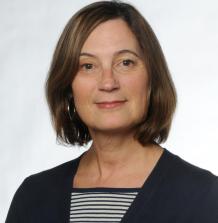 It took years of drive and vision to see broadband Internet services extended deep into the province’s rural areas and along its rugged coastline, and it took a $75 million project headed up by Nancy Flam, Project Director and Senior Policy Analyst, Nova Scotia Department of Economic Development and Rural Tourism.

As team leader for the implementation of Broadband for Rural Nova Scotia (BRNS), Nancy led the way in spreading that vision and drive to connect citizens, businesses, public and health services, universities and training institutions: all Nova Scotians.

BRNS assured the province could boast 100% broadband coverage to more than a thousand previously unserved and underserved communities.

For this obviously complex and demanding project, she would oversee the coordination of the entire network infrastructure build-out, and that meant coordinating the activities of the private sector Internet service providers, as well as public sector funding agencies (the costs were shared among government, both federal and provincial, and the contracted ISPs, Seaside, Eastlink and OmniGlobe).

“One thing I focus on in project management is communication,” she said later. The key to success is a strong communication strategy that allows everyone involved to share ideas, understand key issues and address them.

Her strong interactive leadership helped ensure community, corporate and project partners understood where things were at all the time and that the project and its intended services deliver on what was promised.

BRNS has done just that: Nova Scotia’s fast-growing ICT sector is now made up of some 600 broadband technology companies, both home-grown start-ups and multinational firms, with more on the way. There are 10 universities and 13 colleges offering degrees and programs in ICT disciplines to eager learners.

And BRNS has been cited as a stable and secure base from which the province’s connected communities continue to take full advantage, using the power of the Internet and its potential for boosting economic and social development. 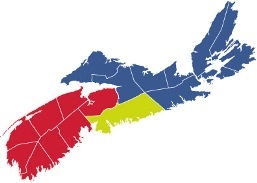 ISPs serve of all the province, including rural and coastal areas. Map Crown copyright © 2013, Province of Nova Scotia

Not surprisingly, then, she’s been honoured for the success of the project at the highest levels.

The 2013 Wilfrid Laurier Public Sector Leadership Award in Advanced Technology was presented to Nancy Flam, during the 2013 CATAAlliance Awards Gala in Ottawa.

For nearly three decades, the CATAAlliance Innovation Awards Gala has been celebrating the best in Canadian advanced technology from coast to coast.

One of several presentations, the Leadership Award is presented to someone from the public sector making a significant contribution to the development and application of advanced technology in Canada.

That someone must show creativity and leadership while doing so, and be consistent in supporting technology and its application.

That someone is Nancy Flam; the award criteria speaks to her continued mission in a leadership capacity with the popular Community Access Program (C@P), one that increases digital literacy and promotes innovation by not only connecting Nova Scotians but providing them access to leading-edge technology and hands-on how-to support.

While all of its sites in rural Nova Scotia offer technology and high-speed broadband connectivity, some C@P sites also offer other services like space, local trainers, and technology mentors.

In congratulations, Nancy’s direction and performance at the job of delivering high speed Internet access across Nova Scotia was noted as a job well done that other provinces and entire countries should follow.