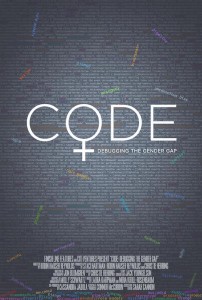 A new documentary called CODE: Debugging the Gender Gap, will debut at the Tribeca Film Festival, which takes place April 15-26 in New York City, and sheds light on the need for encouraging more female participation – and acceptance – in the computer sciences.

The film, reads the Website, “exposes the dearth of American female and minority software engineers and explores the reasons for this gender gap. CODE raises the question: what would society gain from having more women and minorities code?…”

The trailer for the intriguing documentary discusses how, despite women being the pioneer programmers, they have somehow been written out of history. We all, of course, can’t forget that it was Admiral Grace Hopper who wrote the compiler program for translating English into computer code in the first place. She also developed COBOL, one of the first languages used in the computer programming world. Admiral Hopper, not surprisingly, is showcased prominently within the documentary’s materials.

U.S. will be filled by women.

“Being excellent or good at your job isn’t enough if you’re a woman,” notes one female programmer in the film.

“As soon as a woman is introduced,” notes another, “it’s like blood in the water.”

The numbers don’t lie. The film highlights the diversity disclosure reports that were recently released for some of the biggest tech firms, including Apple, Twitter, Google, and Facebook. They all reveal gender gaps at the firms that fall within the 80:20 range of men to women.

The film will look at the issues that exist and clearly need to be addressed, and propose that computer science should become one of those areas of study that’s a requirement for everyone going forward, just like law and economics are today. It’s a core part of the learning experience.

“The jobs are here,” notes one woman in the film. “And there is no one to fill them.”

CODE: Debugging the Gender Gap has three stellar women behind the project. Robin Hauser Reynolds, an MBA businesswoman and

photographer, serves as Director and Producer. Staci Hartman is Producer, and has 15 years of experience in the technology field, working in various marketing roles at Apple, HP, and Tektronix. The documentary was Edited and Produced by Christi Herring, who has her MA in Documentary Filmmaking from Stanford University. She has the 2014 film The Campaign, which aired on public television, to her credit.

The first of six screenings of the movie will take place on April 19. The movie will also screen at the Inspire Conference in Dublin, Ireland this June. Visit www.codedocumentary.com for more details and to view the full trailer.

“Girls are not encouraged, they’re overlooked,” states another sound bite from the trailer. Hopefully, documentaries like this, along with initiatives like the Square Code Camp,  Microsoft Supports Global Call for Coders and Google’s Made With Code will help inspire change, and encourage computer science as part of the standard curriculum and career discussions, not just an area limited to a select few.

Choosing between the Samsung Galaxy S6 and HTC One M9