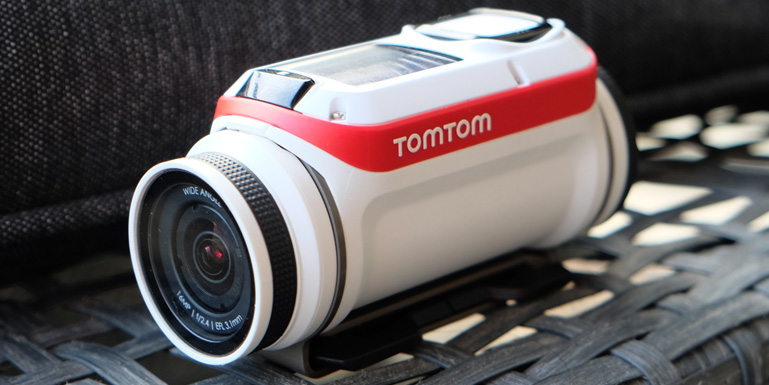 TomTom is better known for its mapping, GPS units and sports watches, and the Bandit represents the company’s first entry into the POV action camera market. Does it have the goods to take on the best in its category?

The bullet-like form factor greatly resembles the old Contour POV cams that were among the industry’s best, and TomTom has outfitted it with a fairly robust set of features to help it stand out. Made up of a few removable pieces, the Bandit has a unique design wherein the back slides out, revealing the microSD card slot and USB plug used to charge the battery. With the card inside, it’s possible to plug it into a computer, transferring media from the card and charge it at the same time.

The body is waterproof to the IPX7 standard, meaning it can stay submerged down to one metre for up to 30 minutes. An optional lens cap accessory (that we weren’t supplied with) raises that to IPX8 and a depth of 50 metres.

The unit is fairly heavy when compared to a GoPro, so it’s not necessarily the fleetest of action cams, and the lack of included mounts limits usage even further. The ringed mount is compatible with GoPro mounts, helping the cause, but beyond that, TomTom only includes a curved and flat sticky mount. Both are of excellent quality though, sticking to a variety of surfaces and standing firm. The one oddity is the mounting clasps on the Bandit itself, which seemed a little too easy to open accidentally. There’s also a sliding ring affixed to the camera’s body, allowing us to change the orientation and keep footage upright, even when mounting it on its side or underneath something.

The controls are fairly easy to navigate after taking a little time to understand the way the menu works. The LCD screen at the top doesn’t offer a live view of the action. It’s only there for setting things up. The directional pad below the screen serves as the only way to get around, moving in any direction — usually to the right and up or down — to access different options.

Our review unit was able to shoot in 1080p at 60fps or 30fps, or in 720p at 60fps, 30fps or 120fps for slow-motion action. We’ve noted that there is the ability to shoot in 4K at 15fps, but we weren’t able to access that, possibly because it’s only available to the European variant. Even so, we didn’t really have an interest in shooting at the higher resolution on such a slow framerate. It’s also capable of capturing stills at 16-megapixels.

Video modes included slow motion, time lapse and cinematic. A press to the right revealed how much recording time (or still images) the memory card could handle. A press up would reveal the Wi-Fi name and password. Connecting to it directly from an iPhone or iPad, and using the free TomTom Bandit app (an Android version is reportedly in the works), turned the mobile device into a viewfinder and controller. The app includes a feature called “Create a Story” where shaking the phone or tablet jumbles splices together a bunch of clips for a quick video montage. There are also options to add an overlay or background music. 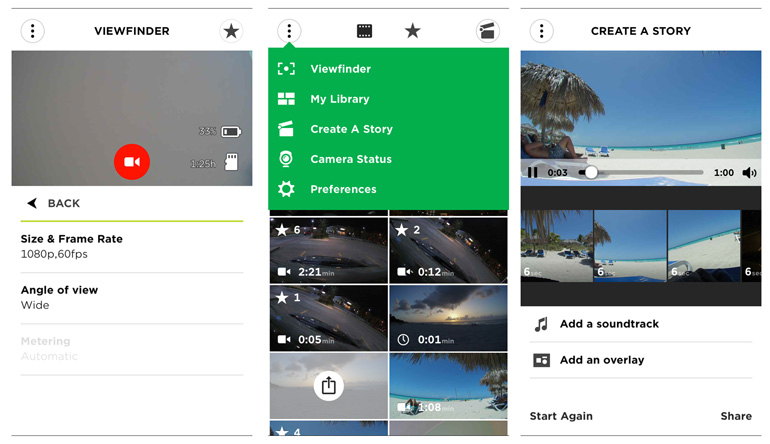 Neither the camera nor the app offer dedicated or automated scene modes. The lens is fixed, so it doesn’t zoom and isn’t necessarily made for macro shots, either. The built-in GPS is neutered on its own, requiring pairing with a phone or tablet to register

We were supplied with a separate remote control that we could wear on our wrist or wrap around a monopod, if necessary. Pairing didn’t require Wi-Fi, but it was still easy to do going through the settings on the Bandit.

As far as image quality, we’ll let the video speak for itself, but needless to say, it’s very good for a POV camera in its price range. There is the usual fisheye effect on the fringes, which is to expected with a wide-angle lens like this, but we found little complain about when it came to colour and composition. Night shooting was a little grainy, but good enough to work with.

All in all, the Bandit is a solid camera, though not necessarily as nimble as the GoPro. At $500, plus extra for the remote and other mounts, it’s pricey to indulge in, but adventurous types are unlikely to be disappointed.