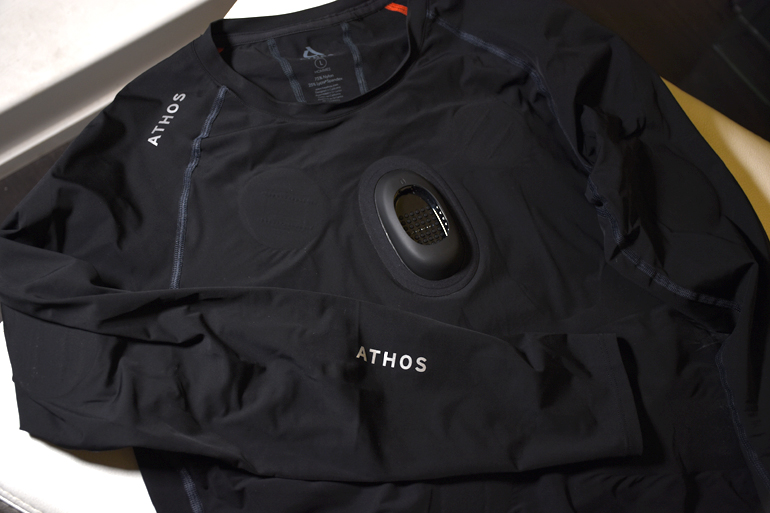 Wearable technology has been driven mostly by fitness bands, smartwatches and other activity trackers, but clothing is also becoming a factor. Athos has come to market with a three-piece ensemble designed to measure muscle activation during workouts, pushing the data to an app that visualizes it all in real-time.

The concept behind Athos was developed by two electrical engineers at the University of Waterloo in Kitchener-Waterloo, ON, though the company operates out of Redwood City, CA.

The three parts that make up the whole thing are a pair of compression shorts, a compression shirt and a small module called the “Core.” Within the clothing are carefully-placed sensors that, when pressed against your skin, read the extent of muscle activity, ranging from light, tone, build and strength. These are also colour-coded on the app in blue, yellow, orange and red, respectively. 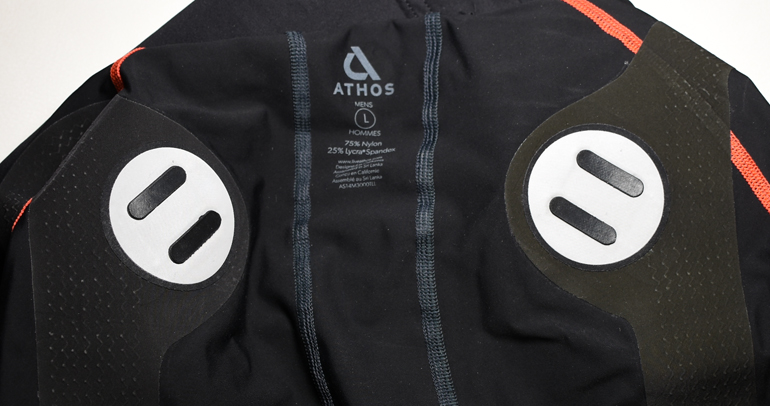 In addition to the sensors, the shirt and shorts each have a holster for the Core, snapping into place to pull in data from the sensors and push it to the free Athos app. These include both EMG (electromyographic) and heart rate sensors, and the shirt adds respiratory sensors on top of that. The Core connects with the phone or tablet app via Bluetooth, and itself, also includes an accelerometer and gyroscope to better track movement. 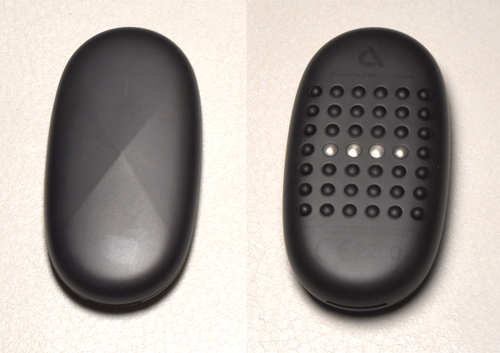 The Core’s holsters are situated on the outer right thigh on the shorts and on the chest where the sternum is on the shirt. Two Cores can be active at one time, pulling in data from all the sensors on both clothing pieces.

Currently, the free app only works with iOS, though an Android one is coming. Pairing the Core is easy, and its internal battery lasts up to 10 hours per charge.

Taking all the sensors, holsters and other components embedded in the fabric into account, the shorts and shirt are heavier than typical workout gear, but not to a point that impedes movement or exercising. To ensure sensors press onto the skin, these are meant to be worn commando. They are also tighter than usual, so what may be close fit for other compression garments may be even more so with Athos. Putting the shirt and shorts on isn’t necessarily a breeze, though it does get a little easier over time.

Using the Athos gear in the gym is also easy. It may seem counterintuitive to have such a visual app when working out makes it difficult to look at it, but Athos has included a recording feature to play back the progress of each set. The app shows a visual of the front and back noting each muscle group. Each active muscle lights up in real-time, indicating how hard it’s working. Once a set is done, the app breaks it down to percentages, showing how hard you worked each muscle pair in the lower or upper body. 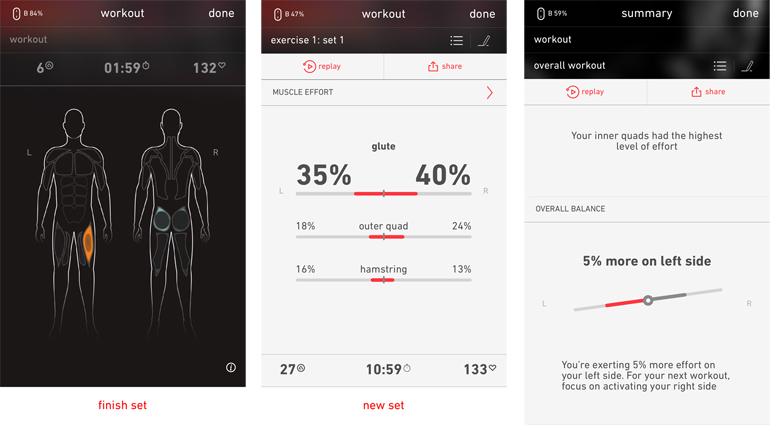 For example, a lower-body exercise will show activation for the outer quadriceps, inner quadriceps, hamstrings and glutes. The upper body shows the trapezius, biceps, triceps, deltoids, pectorals and lats.

With such symmetrical coverage, the sensors and app prove to be good at highlighting imbalances, particularly in my case where I may have favoured one side over another. With injuries to my knees, hip and lower abdomen, I wasn’t surprised. Seeing the extent of the imbalance was enough to consciously aim to correct it — something that I wouldn’t have known to do otherwise.

Unfortunately, I did wish there was wider coverage. Curiously, Athos doesn’t have any sensors for the abdominal area, hips or calves. When I broached this in a conversation with CEO and co-founder Dhananja Jayalath, he said that activating abs is easy to gauge for anyone. While true, I would argue that not including it takes away from one of the key areas men and women work on in the gym. In addition, for someone who does rehab and core strengthening exercises like myself, the only context Athos gives me is for the glutes. The lower body content is certainly useful, but getting more from the actual core area would be truly valuable.

For those working on legs, missing the calves is a big gap, and Jayalath says that could be remedied with a future clothing piece. Perhaps the abs will get some love, too. 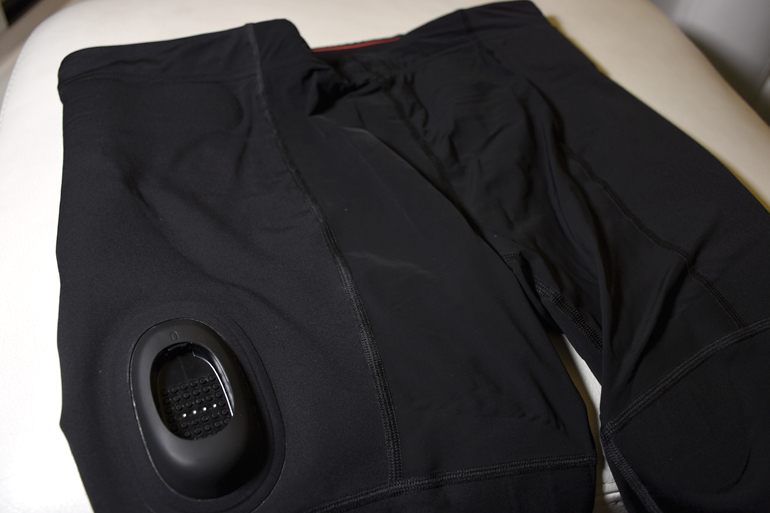 I found the heart rate monitor to be considerably off. When it was showing 125 beats per minute, a fitness band and smartwatch I was wearing were both the same at 95bpm. Working out in the Light Zone, which is below Build and Strength, I found it odd that it put my heart rate at an average of 132bpm. My workout was focused more on rehab and core strengthening exercises, which don’t force me to push myself hard all the time. The reading I was getting from my fitness band seemed far more accurate.

When I did a workout that pushed me harder, the heart rate only went up slightly to 140bpm. It didn’t make sense because I could feel the difference in my heart between the two. After seeing that with three workouts, I never trusted Athos’ heart rate monitoring again, and wore a fitness band to track that for me instead.

The app does require some maintenance and preparation that isn’t immediately clear. You can create a workout and specify the type of exercise you’re doing manually, but you have to name the exercises before you start a set. This would be far easier if the exercises were already pre-loaded into the app and could be dragged-and-dropped into the list. It’s a minor gripe, but a little refinement could go a long way.

The most lasting impact of the Athos product, for me at least, was its motivating influence. As someone who has suffered from a lackadaisical commitment to working out in the past, wearing this gave me greater incentive to get in there more often. 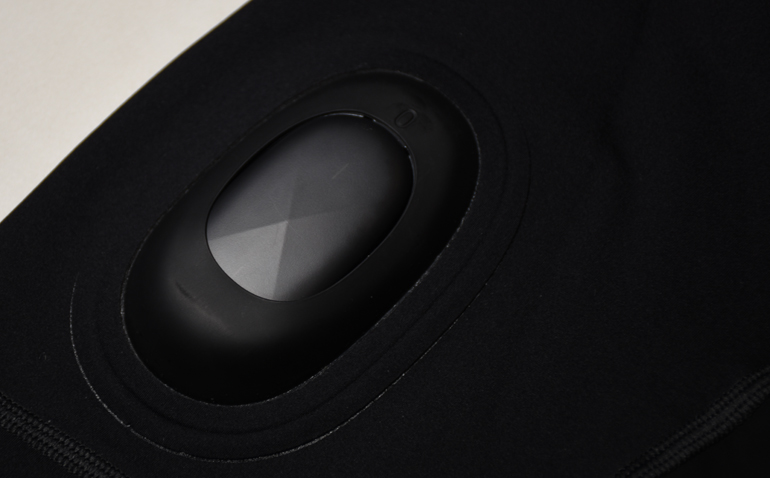 Regular gym rats may scoff at the usefulness of such a product. Why bother knowing about muscle activation when feeling them work and see the results in a mirror is good enough? There is an argument for that attitude, but Athos was originally designed for athletes and scaled for relevance to consumers. Whether you’re just starting to work out, or you’ve lived in a gym half your life, the product could pay dividends and potentially help avoid injury by overcompensating on one side or pushing too hard.

The price of admission, however, may give any user pause. Available now at select Sport Chek stores and the website, the shirt is $230, the shorts (or capri tights for women) are $185 and the Core is $230. Add another Core to get a full body readout and the full cost is expensive.

For that reason, I would suggest Athos for users who feel they will get something tangible from it. Even if it is key to motivating you and changing your workout habits, it may be worth giving it a try. Chances are, the company will improve on these items in 2016, but there’s no telling when they would be released. True wearable tech like this isn’t overly common, and Athos is one of the best available right now.

It Will Be a Happy New Year, as Alien Civilizations Unlikely to Attack!