Technology is slowly moving away from an app economy and into the bot economy. Everyone from Facebook to Microsoft is investing in chatbots as the next big thing in technology.

Bots are basically programs that automate various tasks humans would usually do. This ranges from making appointments, reserving flights or restaurant tables and even using artificial intelligence or A.I. to create a chatbot that can run some basic f.a.q. scenarios or customer service tasks.

“As an industry, we are on the cusp of a new frontier that pairs the power of natural human language with advanced machine intelligence,” said Satya Nadella, CEO, Microsoft during the company’s recent Build conference.

Nadella was alluding to Microsoft’s attempt at promoting the building of intelligent bots. “Developers and businesses can create intelligent end-to-end solutions, including new apps that learn about our world and bots and agents that interact with people in personalized, intelligent ways.”

Bots can replace human customer service reps for menial tasks like taking product orders, receiving requests for reservations, tracking packages or collating information from various websites or services at once.

Chatbots, which combine natural language with smart bots are like personal assistants within messaging apps and can understand human language and context as well as commands. For users this means we no longer have to leave one app to go make an appointment or check status of shipment since chatbots are designed to do that for us within the framework of the app.

Bots ideally offer the next phase of computing interface. We went from command line to graphical user interface, from desktop to mobile and finally from apps to bots in a matter of 40 years. While this is quite exciting and many bots are currently in use by various services, there’s still a long way to go.

Microsoft learned this lesson the hard way with its Tay Twitter bot which Microsoft described as an experiment in “conversational understanding.” The more Tay ‘conversed’ with Twitter users, the more it learned and evolved. 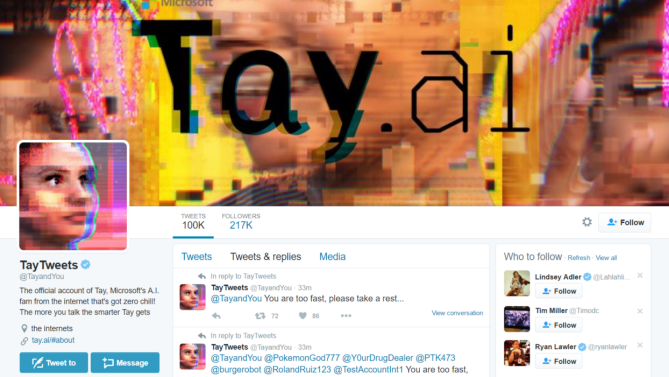 Unfortunately for Tay, who was unceremoniously shelved in less than a day, the negative, sexist, hateful and ignorant interactions the A.I. had on with people on Twitter helped form a very negative personality.

The context and content of the discussions that Tay was having on Twitter soon flew off the rails as an example of how a great idea can be corrupted.

Not all the bot news is bad, however. There are a number of interesting applications of the technology that, if kept on a short leash, can help rather than harm. Ghostbot is a chatbot that is designed to deal with unwanted text messages

Ghostbot is part of Burner, an app that generates a random phone number for users who don’t want to use their home or personal number for transactions or calls. Ghostbot is the witty text message autoresponder that anyone can add to Burner to handle unwanted, aggressive, or abusive texting situations. 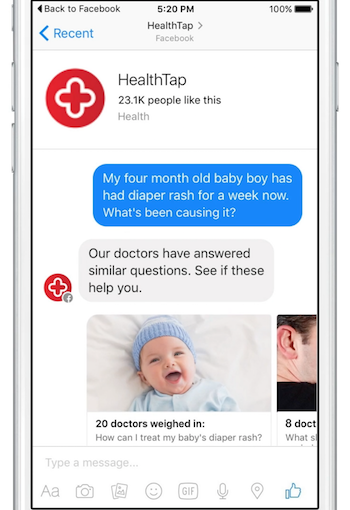 When dealing with abusive or harassing texts, “switch Ghostbot on, an intelligent agent will take over and handle aggressive, abusive, or otherwise don’t-want-to-deal-with-it texts for you with humour, effective disengagement tactics, and a touch of artistry.”

HealthTap’s physician-provided answers have been made available on a Facebook Messenger chat bot.

More than 900 million people use Facebook’s Messenger app, according to HealthTap. So the novelty of being the first and only health bot on the platform, for now, could prove to be a good marketing move for the company, if nothing else.

HealthTap’s bot allows users to type a question into Messenger any time and receive free responses from doctors. Users are also able to see responses from doctors to questions that are similar to their own. While this sounds like a hypochondriac’s fantasy, bots are applied to help simplify the process of getting medical information.

When applied seamlessly, bots are a more natural and instantaneous way to get information, get things done and find answers without necessarily needing to open an app or run a browser search.

As a new technology, chatbots and similar A.I. and machine learning enabled solutions can help automate and simplify countless tasks for the benefit of users and consumers.

Have a grandfathered wireless plan? Here’s what you lose if you sign a contract