Technology is changing the way pro sports is consumed and played; this year, new records will be set as industry revenues and fan engagement levels are pushed to unimaginable heights.

Technology will rule sports so completely that new rules will be needed for how the game is played.

Although technology has already had an impact on major sports activities, the close integration of technology, data and sport will only get tighter as legalized betting and online sports wagering come to the U.S. and other international jurisdictions.

That means the desire and need for more information about the performance of pro sports athletes, teams and leagues will increase and technology will be used to deliver the goods.

No, hockey pucks will not glow – but they will have data sensors, microchips and GPS locators embedded inside them. So, too, the players’ shoulder pads. 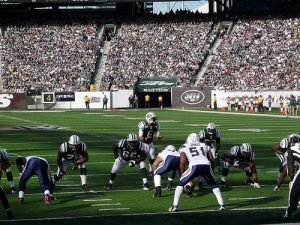 The National Football League is among the top sports leagues to adopt technology to both evaluate athletes’ performance and engage fans. CC 2.0 Creative Commons image.

That means a whole whack of data will be available for athletic performance evaluations, broadcast and streaming media coverage as well as sports betting, gambling and gaming opportunities. Big data analysis is also changing the way sports are managed and monetized.

At an NHL hockey game earlier this season, demonstrations of how data will be used were shown: virtual reality headsets, augmented reality graphics and HDTV screens were used to supplement the broadcast coverage by flashing on screen certain prop bets and ad hoc wagers that can be placed on individual micro-outcomes in a game. 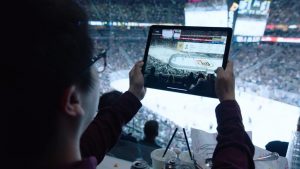 The National Hockey League is bringing tracking technology to the rink, and fans will be able to connect with real time data in situ. NHL.com image.

Mini-bets like ‘Who will score on this shift?’ or ‘How may three’s will he hit?’ will be more prominently positioned in live sports coverage, with delivery across app-powered smart TVs, voice-activated home assistants and augmented reality-enabled mobile devices.

(Of course, these platforms and gaming opportunities are about fan engagement and enjoyment – the players themselves have some concerns about all that data collection, such as the use of collected data by employers during contract negotiations and arbitration with players. The NHL and the Players’ Association have already said that data will be a topic for negotiations in the next collective bargaining sessions.)

Pro sports athletes are happier with another decision about the use of technology – MLB is joining other leagues in now allowing its players to use copyright material and protected media on their Instagram and Facebook feeds.

Using Greenfly, a digital content management system developed in part by former major league all-star and Toronto Blue Jay Shawn Green, the league will actually provide high quality clips, still photos, video highlights and game graphics to players and their representatives for use in social media; usage and interaction with the media will be tracked and measured to assess just how well it is working to drive fan engagement, participation and consumption.

Betting on the Blockchain

Part of that assessment will undoubtedly include how much sports betting and in-game wagering is made.

How those bets will be made is yet another aspect of how technology is changing the way sports are played.

Often described as a kind of decentralized ledger system, blockchain technology uses peer-to-peer networking connectivity among several different computers linked or chained together. Each computer holds a block, or secure and transparent record of a particular transaction. 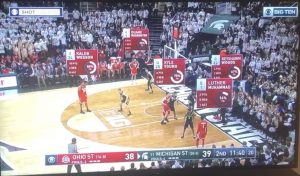 So sports bets and wagers will not have to flow through often insecure or unreliable third-party partners, and they can even be directly linked to digital wallets and personal accounts (should you so desire). ZenSports is one such company; it has launched an online peer-to-peer sports wagering site that makes use of decentralized systems.

Blockchain-secured currency will open up wagering across jurisdictions (and across major international sports) and those sports books and online casinos that already accept digital currencies like Bitcoin or Ethereum will be well positioned to take advantage of continued blockchain development.

So technology will be used to gather data about sports performance. That data will enable gaming, gambling and wagering opportunities. Those opportunities will attract more gamers and gamblers.

In fact, one tech company has its sights set on turning “all sports fans into bettors.”

That what Patrick Keane has in mind for his sports media and technology company, The Action Network. 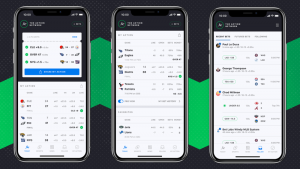 Mobile apps like those from The Action Network are designed to help people place informed bets. They do not take bets themselves. TAN provided image.

Content created by the company covers developments in sports betting and helps bettors make informed bets; it does not take bets itself.

But Keane says he will attract 15 million sports bettors this year, up from industry figures that say about 10 million Americans place sports wagers (averaging about $50 bucks a pop).

And people are betting on (The Action Network just announced it has received additional funding to the tune of $17.5 million (USD) for its growth trajectory.

That’s yet another confident bet by investors that technology will continue to play a positive role play in the way we play, watch and consume sports.

Now, if only we can keep the clock out of baseball.

The best convertibles and 2-in-1 PCs