The Canadian Opera Company (COC), in partnership with The National Ballet of Canada (NBoC) and Screen Industries Research and Training Centre (SIRT) at Sheridan College, announced the Digital Stage initiative earlier this year, and a report about its progress will be tabled at a companion symposium, the first of its kind in Canada, to be held next week.

The project participants all want to be able to harness the power of technology and digital media to make the concert and performance experience even more exciting and immersive for the audience.

Of course, like all arts organizations, they want to build up their audiences and connect with those audiences in new and meaningful ways.

Some may see digital technology as the enemy of the arts, in the sense that digital and social media platforms are an alternative source of entertainment (some might say distraction) that competes with more traditional art forms. Technology can free the audience from so-called appointment entertainment (meaning those shows and performances that come only at a set time of day and cannot be repeated or watched in short segments) by recording and then streaming a ballet or opera for later enjoyment.

The initiative is a long-term project, but the initial goal is to explore ways that technology can be used to present performing arts and to enhance or augment a performance at every level. In the first phase an industry-wide scan was made of current arts practices and experiences with technology as a way to set the stage, so to speak, for further developments.

“The Digital Stage project allows us, and our peers, to explore the boundless possibilities offered by digital technology and to learn how it can be incorporated into every facet of our work — from the stage, to the studio, to our administration,” explained Barry Hughson, Executive Director of The National Ballet of Canada, when the project was announced. “Embracing technology and innovation is vital to keeping the arts relevant, accessible and connected to our community.”

In fact, the NBoC has been using digital media technology for some time in order to live stream performances by the ballet apprentices as a learning and awareness tool. Several hour and fifteen minutes-long dance performances have been delivered to more than 24,000 students across the country.

It was almost exactly three years ago that the COC unveiled its 98” multi-touch interactive freestanding video wall in its home at the Four Seasons Centre in Toronto. The wall includes two webcams for photo-capture applications to engage visitors. Using the latest touch sensors, the interactive screen lets users to interact with the COC in various ways, including finding out about scheduling, tickets, performers and more. 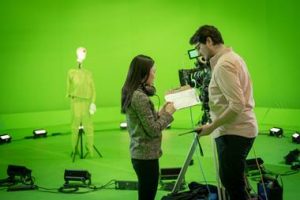 More than basic live streaming or touchscreen kiosk functionality, the Digital Stage initiative wants to explore new digital technology and embrace its transformative power across all aspects of the performing arts ecosystem, both in front of and behind the curtain.

As such, Sheridan College and its high-tech Screen Industries Research and Training Centre are important partners on the project: it can bring together the performing arts with virtual and augmented reality systems that not only change the definition of stage but also of audience: interactivity and immersive experiences can do much more than let viewers see a ballet; they can actually be a part of it!

The Sheridan team will work under John Helliker, Dean of Innovation, involving SIRT as well as the college’s Canadian Musical Theatre Project, along with faculty and students in various programs in the Faculty of Animation, Arts and Design.

“Sheridan has a strong commitment to catalyzing and supporting change at the intersection of creative content and digital technologies within the arts,” Helliker outlined. “Collaboration within an industry-wide initiative is a unique opportunity for our research and incubation centres, as well as faculty and students, to help transform the cultural sector through digital innovation and expand its capacity to reach Canadian and worldwide audiences.”

As mentioned, the first phase of this multi-stage project is already underway with an environmental scan of the performing arts sector and beyond, both domestically and internationally. KerrSmith Design is a multidisciplinary research and design studio, specializing in complexity, futures, and innovation; it has been selected to research and identify digital best practices, challenges and barriers for the project.

Exploring and piloting new technology will form the second phase of the Digital Stage. Over the coming months, project participants will test various digital advances in real-life settings and conditions to assess practicality and potential application across Canadian organizations.

Finally, the Digital Stage will host a series of candid conversations around current challenges and new data as it is collected. The first symposium is scheduled for October 2 at the Joey and Toby Tanenbaum Opera Centre in Toronto.

When first announced, the Digital Stage initiative was enthusiastically described by COC General Director Alexander Neef as “the only way for the arts to continue resonating with our audiences.”

Unfortunately, he will not see all the results. The COC subsequently announced Neef will be the new General Director of the Opéra national de Paris, starting in the 2021/2022 season.

But his enthusiasm for the Digital Stage project and his awareness of the positive potential impact that technology can bring to the performing arts remains as a strong foundation for the project:

“As cultural tastes and habits continue to evolve with changing technology, we know that the challenges we face as an opera company echo those faced by others in our industry and that there is a great opportunity to tackle these issues as a sector, through increased knowledge and understanding. We don’t want to simply react to change as it occurs; we want to equip ourselves and our peers with the capacity to adapt and lead through change.”

The National Ballet presented 2,784 performances and outreach events in the 2017/18 season with a total attendance of 2,658,428. There were 79 performances at the Four Seasons Centre for the Performing Arts with 143,831 in attendance. The company held 2,688 community events reaching 344,740 people. In 2016/17, the Canadian Opera Company reported 142,572 total attendance and reach, including onstage programming, outreach and education activities as well as free concerts at its home base in Toronto.

Digital image specialists at Digital Stage partner KerrSmith Design captured an image from a COC performance of Così fan tutte, then altered, flipped and repeated it to create the textile-like pattern above. Image courtesy of KerrSmith Design. 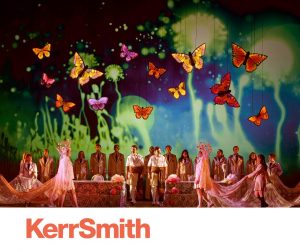 The Side Gig Economy in Canada