Medical researchers. Political strategists. Marketing managers. Army generals, sports franchises and many more all have great ideas for how to use artificial intelligence. 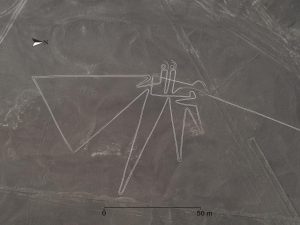 Nazca (or Nasca) Lines are a collection of cultural remnants and archeological artifacts found on the high plains of southern Peru. Is this a bird or a map of airport runways? Image: Masato Sakai, Yamagata University.

How about tracking extraterrestrial visitors to Earth and analyzing potential alien spaceports?

A project now underway in Japan brings together scientists and academics at Yamagata University with the AI algorithms and powerful servers used at the IBM Thomas J. Watson Research Center outside of New York City to research and analyze what are known as the Nazca (or Nasca) Lines, a collection of cultural remnants and archeological artifacts found on the high plains of southern Peru.

But are those ancient artifacts actually alien airport markings?

That’s just one of the pre-AI speculations surrounding the etched, scraped or excavated lines in the ground that crisscross the Peruvian plateau. Archaeologists first discovered the mysterious Lines almost one hundred years ago, but the markings have been dated back to between 200 BC and 500 AD. There are hundreds of intersecting lines, and some are several hundred metres long.

The Nazca Lines (many barely visible after all these years) seem to convey images of various shapes, sizes and complexities: there are basic geometric shapes like triangles but also more complex renderings, apparently of plants or animals…or extraterrestrials.

Most perplexing is that the drawings are all best seen from above – like from an aerial view, in fact.

Why were the lines made? By whom? What do they represent or symbolize? Why are they best seen (only used?) from way up above, when high vantage points are distant or difficult to access? 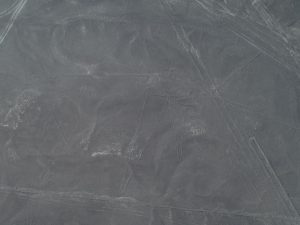 There are hundreds of intersecting Nazca lines and some are several hundred metres long. But many are barely visible after all these years. Can AI find something in this pre-processed image that archeologists have not? Can you? Image: Masato Sakai, Yamagata University.

Those questions and many more have fuelled much speculation about the lines. There have been several books and movies that mash-up archeology and architecture, aliens and extraterrestrials, even godlike figures and otherworldly beings who gave advanced technology and wisdom to our ancient predecessors.

In a book called Secret History: Conspiracies from Ancient Aliens to the New World Order, author Nick Redfern speculates that the lines look like “an airport as seen from the airplane” and that Nazca was the place where those “non-human figures, gods, extraterrestrial beings – take your pick” planned “to build a sort of astroport” where collected “data about the earth could be brought for retrieval”.

Yikes! Anyone seen any suspicious data collecting going on?

But the most famous book about Nazca must be Chariots of the Gods, the 1968 bestseller by Erich von Däniken.

He described how the technologies and religions of many human civilizations were actually given to them by ancient astronauts who visited the Earth (thanks in part to convenient markings like those at Nazca) and were welcomed as gods. 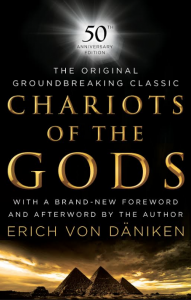 The most famous book about Nazca, Chariots of the Gods, the 1968 bestseller by Swiss author Erich von Däniken, has been re-released and updated.

(The release of von Däniken’s original book was commemorated last year, and it was re-released in an anniversary edition with a new foreword and afterword by the author, who still theorizes about an extraterrestrial intervention in human history — and he says he has made the archaeological discoveries to prove it!)

So it is true that new discoveries about the Nazca Line formations are being made, but mostly thanks to IBM Watson.

In fact, the researchers at Japan’s Yamagata University have discovered more than 100 new geoglyphs since 2006, and they’ll continue to work with the IBM Watson Machine Learning Accelerator and a platform known as IBM PAIRS as part of a two-year academic agreement between the university and the tech giant.

The researchers have access to some very powerful tools: the deep learning platform IBM Watson Machine Learning Community Edition (formerly known as IBM PowerAI) is running on a super-souped-up IBM Power System AC922 (Power AC922) server equipped with the same IBM POWER9 processor that has been at the top of several recent supercomputer performance rankings.

And the IBM PAIRS (Physical Analytics Integrated Data Repository and Services) geoscopic platform the research team is using lets them integrate tons of drone and satellite imagery, hyperspectral geographical surveys and other geospatial data into their analytical programs. IBM PAIRS allows for satellite photos and other raster-based data to be searched at the individual pixel level.

Uncovering new Nazca formations using existing photographic analysis had been difficult because of the physical “white noise” in the images, such as from nearby roads, eroded ground and flood trails. The Yamagata researchers felt that AI could help sift through tremendous amounts of data to pinpoint clues to unearthing new figures. 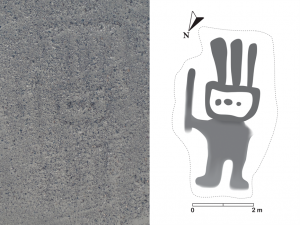 After training a deep neural network to identify Nazca Line characteristics, the researchers fed the IBM Watson system with even more images to see if the AI could help identify markings the researchers had missed.

It worked, but somewhat ironically: the AI system identified a humanoid-like figure that human researchers had been unable to see.

The research team, led by Yamagata University’s Masato Sakai, has now uncovered 143 previously unseen etchings across an area of some 500 square kilometres; as many as 40 have been described as “biomorphic glyphs depicting animals, plants or people.”

The exact purpose of the geoglyphs on the plains of Nazca, designated a UNESCO World Heritage Site in 1994, is still unknown.

But using advanced artificial intelligence algorithms and powerful computing technology, researchers hope to find out more about the mysterious formations and gain some insight into the worldview of the people who made and used them. They’re conducting fieldwork on-site, as well, and the university says it will produce a detailed location map of all the geoglyphs.

Just in case the aliens lost theirs. 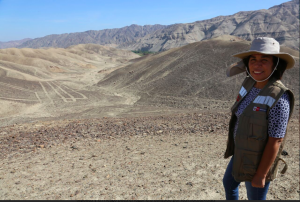 The Peruvian Ministry of Culture has also announced the finding new glyphs and lines on the plains of Nazca. Image courtesy Peru Culture Ministry.