I saw this amazing infographic here and it inspired me to write about it. 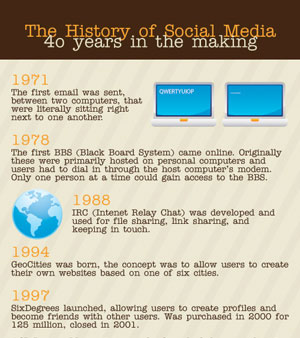 Social Media has always existed. Technology has hastened its arrival online. And it wasn’t called social media then: it was word of mouth. Discussions have always existed but the speed to which the connections happened thanks to early technologies from Yahoo!, Friendster, AOL, etc have extended communication lines across the world to friends, and potential friends within a matter seconds. This has helped enable the evolution to this borderless society that we have today.

The first networked email can be debated, however Ray Tomlinson claimed to send the first networked email. This is his account: “The first message was sent between two machines that were literally side by side. The only physical connection they had (aside from the floor they sat on) was through the ARPANET. I sent a number of test messages to myself from one machine to the other. The test messages were entirely forgettable and I have, therefore, forgotten them. Most likely the first message was QWERTYUIOP or something similar. When I was satisfied that the program seemed to work, I sent a message to the rest of my group explaining how to send messages over the network. The first use of network email announced its own existence. “

The infographic was made by Angela Nielson of One Lilly Creative Agency. While  it cites a 40-year development period, the crux of the development and adoption have really been felt in the last 15 years.

It’s interesting to see that Yahoo! was a true instigator of social with the launch of GeoCities (now defunct) and Flickr but has struggled to keep up with the likes of Facebook and Twitter in the last few years. AOL led the way with email instant messaging, but was eventually pummelled by Yahoo! and MSN in these platforms. These were the kings of the internet for many years from 1995 to about 2007. Their slow demise has been a function of their own inabilities to adequately bring products to market in an effective way, coupled with their futile attempts to keep up with consumer behavioural changes. In the online world 5 years is a lifetime, and right now Twitter, Facebook, Google, and Youtube are having their own heyday.

There’s no denying that if this infographic had been created a few months later, it would certainly have added Google Plus to the mix of amazing milestones. The Search Giant is helping organize networks into subsegments – something Facebook hasn’t been able to do effectively – and distribute relevant content accordingly. Google Plus is still in its early days, and stats cited by GigaOm indicated that 83% of users are inactive. It looks like students are leading the way, however. … similar to Facebook’s early successes. Time will tell however.

10 video games that will be hot this fall