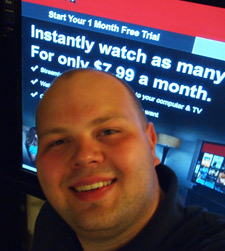 A word from Tim Teatro …

The review of the Canadian Netflix experience that appears below has generated some passionate discussion.

In it, I complained that Canadian content was noticeably absent from the Canadian Netflix library. Users have made points both in support of and in condemnation of Netflix’s Canadian offering.

WhatsYourTech.ca’s readers poll on the Canadian Netflix experience turned out quite well for Netflix. Of those who responded, 18 percent love Netflix and 32 percent think it’s OK.

It also means that 63 percent of our poll respondants have used Netflix, and the majority of those like it. Fourteen percent use other online sources, and 23 percent don’t watch movies online.

Still there are dissenters. “Sam” who commented on my review said that it and the comments it received deterred him from signing up for Netflix. I would still encourage users to sign up for the free 30 day trial.

It’s not that Netflix don’t want to pay for the licensing, its that in Canada streaming is locked up with ctv.ca, global.ca and the other one (can’t remember). Netflix can’t get any of that content until contracts with these companies expire.

I think it is the valid point that CTV is perhaps not selling the rights to Canadian content or may have some exclusivity on american content.

Anon’s sympathetic perspective doesn’t seem to be shared by most of the other readers. Regardless of the obstacles faced by Netflix, it is clear that they must expand their database before they will find mass appeal in Canada.

I’m still using Netflix. Even though the value Canadians receive is shameful compared to the American service, I still find that I enjoy the old movies enough to make it worth it. I still sincerely hope that pressure from consumers will force Netflix to expand it’s Canadian library.

To the reader’s: I’d like to hear opinions on the anti-competitive climate in Canada, with internet providers imposing bandwidth caps on users, and offering their own “on-demand” services.

Last month I signed on with Netflix to check out their Canadian offering. Here’s what I’ve found.

The experience started well. After signing up, my wife and I had a wonderful time going through and rating hundreds of our favorite movies so that Netflix could learn our preferences. We spent two hours getting psyched up by the prospect of watching our old favorites: Ghostbusters, Back to the Future, Star Trek, E.T., (… okay, admittedly these are my favourites).

After such a gratifying first impression, I was extremely let down by what was to come. Once we were ready to watch, it took me at least an hour before I could access my new service. First, Netflix doesn’t work on Linux due to the lack of Microsoft’s Silverlight support. So I figured I’d try it on my X-Box 360—how could you get more Microsoft? By some stroke of stupidity, you have to have an X-Box Live Gold membership to download the Netflix app. I actually had a subscription waiting to be activated, but I refuse to pay Microsoft a toll to access a service I’m already paying for! Thanks Sony, for the PS3; I finally got it working without paying any more money.

With a well earned feeling of satisfaction, I pointed the remote control at my entertainment system, and clicked ‘Ok’ to begin my Canadian Netflix experience. By that time, too late to take in a new movie, I thought I’d watch one of the classics I was craving.

Disappointment struck again when I went in search of any of my favourites! I could scarcely believe that anyone would offer a streaming video library without the likes of Star Wars, E.T., Ghostbusters, Iron Man, the new Star Trek, League of Their Own, X-Men, Lord of the Rings, Frequency… I could go on all night.

At first glance, the Netflix library contains a discombobulated assortment of B-movies, box office flop outs, peppered with the odd popular pick and a few gems to justify the claims of having popular movies. Most strangely, it contains a lot of sequels without their predecessors (eg. Terminator 2 without Terminator, My Girl 2 without My Girl, Aliens without Alien, Iron Man 2 without Iron Man). When it can’t offer you the movie you wanted to see, it offers some often suitable alternatives.

I do find Netflix’s suggestions to be helpful. It’s actually amazing how accurately it predicts my star ratings for movies. It often suggests very good movies that I haven’t seen before, and I quite like this. Maybe my favourites aren’t there, but it does help me find some new favourites. I think this really makes the value in the Netflix offering.

You’d be hard pressed to find any new releases on Netflix. I think this is a problem in general, both in Canada and the US. It takes a few months for Netflix to get the rights. The film companies don’t want Netflix to impact movie sales. They still haven’t gotten it into their heads that the Internet has changed their business model. People will just continue to download (illegally) for free unless you give them a reasonable alternative to overpriced DVDs and Blu-Ray disks. The music industry went through the same growing pains back in the days of Napster.

With Netflix Canada, I wouldn’t count on seeing your favourite movies—even a few months after they are released. In the month I’ve had my Netflix Canada account, they’ve been far more interested in getting a lot of inexpensive licenses (things most people wouldn’t want to watch), rather than forking out for the popular stuff. This includes a lot of kids content. It’s been really disappointing. Check out the recently added list to see what I mean. Hopefully, you’ll disagree with me.

Not much that’s popular here. No House, Two and a Half Men, Big Bang Theory, Grey’s Anatomy, or anything else that one tends to find on prime time television. The most current show I saw on the menu was Breaking In, which they probably got cheap considering the show was cancelled midway through the first season.

Again, I seriously get the impression that they don’t want to pay money for licenses.

Netflix Canada—they must have someone in charge of Canadian content, right? I doubt it.

Canada produces some awesome TV shows, like Rookie Blue, Flashpoint, and Warehouse 13 but none of them are available on Netflix Canada. They are available to Netflix customers in the US.

The selection of favourite movies can seem quite limited, and the options for popular TV shows are nonexistent. However, because of the intelligently selected suggestions, based on your likes and dislikes, Netflix presents and opportunity to discover new favorites, and that’s where I really find value in the service.

With a free free 30-day Netflix trial, there’s no way to lose, and the cost of the service is only CAD 7.99/mo after the end of the trial. I think it’s well worth the price, but the same money in the States gets you a lot more. I invite anyone from Netflix to explain why this is, since I can only speculate.