Google recently announced its Chrome desktop OS that is set to launch in 2010.  What makes the Google OS is unique is that it works entirely inside the Google Chrome browser with tabs as the main means of navigation between programs.

Unlike traditional Windows or Linux operating systems that require installation in computers before they can work, all the Chrome OS applications will be entirely cloud-based and run via the browser.

As a cloud OS, Chrome will also integrate Google’s existing online services such as Gmail, Picasa, Maps, Google Talk and others. You can, in theory, have the exact desktop in any computer you use just by accessing the browser with your credentials.  One of the strengths of such a system is instant-on access since the OS loads quickly much like a webpage does. 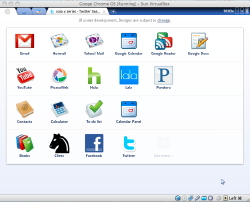 Google Chrome OS in a Browser

Speed, efficiency, uniformity and predictability are just some of the overall benefits of a cloud-based operating system but it isn’t for everyone and it isn’t perfect.

For one thing, users will need to be constantly connected to the Internet in order to access Chrome OS files and applications, making it tricky for anyone to work offline. There’s also the possibility of apps and documents becoming unavailable or lost should the online services fail or be compromised. Google will need to solve the problem of external peripherals and incompatible device drivers. Still, there are viable uses for a low-cost, low-impact OS especially in the educational market.

Chrome OS has some very specific requirements. It will not work on standard hard drives, only SSD (Solid State Drives) which are common to low-end netbooks.  While it can run on both x86 (Intel/AMD) CPUs and ARM CPUs, Google has made it quite clear that it will only be sold on specific Chrome OS devices approved by Google. The Chrome OS code is currently available to programmers as an open source project.

HP, Acer, Adobe Asus, Lenovo and Qualcomm are just a few of the manufacturers currently developing hardware for the new OS.