Apple  announced that its iPad tablet will be available in the US on Saturday, April 3, for Wi-Fi models and in late April for Wi-Fi + 3G models. In addition, all models of iPad will be available in Australia, Canada, France, Germany, Italy, Japan, Spain, Switzerland and the UK in late April. This confirms reports that supply of the much anticipated iPad has fallen short of expectations.The iPad was expected to be available in great quantities mid-to-late March but it seems that supply hasn’t been up to snuff. Apple has limited release of the tablet to US customers. Then, when supply catches up, it will begin rolling out the non- 3G enabled version to other countries including Canada. 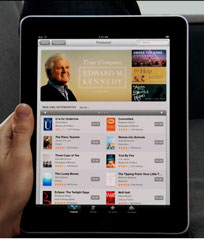 Will we see frenzied lineups and overnight campers staking out Apple stores across the US like we did when the first iPhone was released? Below is more information from Apple.

Starting on March 12, US customers can pre-order both Wi-Fi and Wi-Fi + 3G models from Apple’s online store (www.apple.com) or reserve a Wi-Fi model to pick up on Saturday, April 3, at an Apple retail store.

“iPad is something completely new,” said Steve Jobs, Apple’s CEO. “We’re excited for customers to get their hands on this magical and revolutionary product and connect with their apps and content in a more intimate, intuitive and fun way than ever before.”

Starting at just US $499, iPad lets users browse the web, read and send email, enjoy and share photos, watch videos, listen to music, play games, read ebooks and much more. iPad is just 0.5 inches thick and weighs just 1.5 pounds—thinner and lighter than any laptop or netbook—and delivers battery life of up to 10 hours.

iPad will be available in both Wi-Fi and Wi-Fi + 3G models in late April in Australia, Canada, France, Germany, Italy, Japan, Spain, Switzerland and the UK. International pricing will be announced in April. iPad will ship in additional countries later this year.

The iBooks app for iPad including Apple’s iBookstore will be available as a free download from the App Store in the US on April 3, with additional countries added later this year.

Many competitors such as Dell, Archos and assorted new players in the tablet space are no doubt waiting and watching to see how consumer reception for the iPad will be. Many of these upstarts will definitely be competing in terms of price as well as feature sets, notably with the use of Google’s own Android OS rejigged for the tablet form factor. It will be interesting to see how Canadians will adopt the iPad and if it will be as big a hit as Apple’s iPod and iPhones of the past.

How Will Google Chrome OS Change The Landscape Of Desktop Computing?

Your video planning guide – the safari is only the beginning