Social media tools, portable computers, online conferencing solutions and high definition video will be used to document an amazing adventure to the top of the world, as a Canadian adventurer makes his way to the summit of Mt. Everest over the next several weeks.

He won’t be alone by any means, and even with the tons of technology he’s taking, the risks are enormous – life threatening, in fact.

But the rewards balance those things out, says Elia Saikaly, an experienced mountain climber, media professional and committed adventurer. 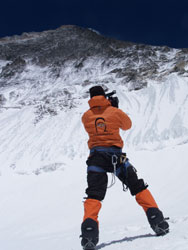 Some of the benefits are for students across Canada, who will be able to check on his progress in real-time, communicate with him via VoIP, and watch scenes from his climb in HD video streams!

It’s all part of an incredible learning project designed to engage and inform school kids – but the rest of us armchair adventurers can join in!

“We’re showing students that they have the power to change the world,” Elia explained, a few days before leaving his home in Ottawa on the journey. “Mahatma Gandhi said: ‘Be the change you want to see in the world’. The expedition’s goal is to spark the imagination, inspire students everywhere and to serve as the catalyst for youth engagement and lasting positive change.

“The climb is tough enough, sure, but one of the biggest challenges we want to overcome is how to best inspire, engage, entertain and motivate kids,” he added. “We want kids to see what is possible, and be inspired to pursue their own dreams, no matter how hard or challenging they might be. Just like mountain climbers, we all face obstacles, challenges, difficulties that must be overcome if we are to reach our goals.”

Over 130 schools and more than a thousand students in Canada will follow his Expedition 2010 on a new interactive Web channel, called www.wigup.tv, run by a Montreal based company.

Live updates, daily blogs, streaming live videos and webisodes will be produced, edited and fed from Everest on a daily basis to the site.

Students will have the ability to communicate with the expedition team via Skype Video, sat phone and BGAN satellite Internet network technology.

Saikaly will also post geo-tagged photos, videos and updates to an interactive mapping system called Epic Tracker, so we all see his exact location and follow his progress in real-time on his site, www.findinglife.ca .

The two month expedition to the summit begins March 27th, with several stops along the way.

Saikaly will visit various philanthropic organizations and others schools in Nepal on his way to Everest base camp. He will share the entire experience with kids – mostly back home in Canada, but viewers can be anywhere on the planet. The kids will participate in fundraising efforts to help build homes and get safe drinking water to children in India. 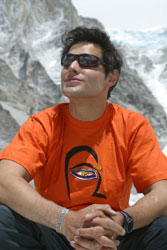 Elia, also an accomplished filmmaker and bilingual TV host, has tested the concept in previous mountain climbs – he’s been to Everest before, too – and he’s expanding the concept this time around.

This trip, he’s also travelling with an experienced video editor; together, they will produce high quality HD video segments from each stage of the climb to create short, online webisodes.

Eventually, though, those clips will be combined into a feature length documentary film, and a new kind of ‘reality TV’ show – a real one, captured as it really happens!

With an HD helmet cam strapped on his head, a wireless microphone around his neck, a professional Sony HD camera in his hand (and a back-up in his pack), Elia hands off recorded DV tapes or flash memory cards to one of four climbing Sherpa’s accompanying him to the summit. (A physician is also with him.)

The Sherpas take the media back down to base camp on foot, possibly hundreds or thousands of feet below, where editor Garry Tutte waits with three Apple MacBook computers, each loaded with video editing programs and other software tools.

Once a segment is edited — and it must be edited twice, once for English and once for French speaking audiences — it is compressed and then uploaded back to Canada via a portable but powerful BGAN broadband voice and data satellite system for final packaging and posting to the Web.

As well, the specifics of Elia’s whereabouts during the adventure will be tracked and plotted on detailed maps in real-time using Epic Tracker, a great online service that’s kind of like a hybrid among Twitter, Ninq and Google Maps.

The team has with it primary audio, video and computing gear and back-ups, as well as GPS and satellite gear, solar panels, rechargeable batteries (good to 8,000 metres) and, yes, an emergency power generator – not to mention the tents, sleeping bags, extra clothes, food and emergency supplies any attempt on the summit of Everest requires.

Nevertheless, Elia said, “It’s not necessarily what we do with the technology that makes this adventure immersive.”

It’s about telling and showing powerful stories, getting the audience directly involved and giving them a sense of shared accomplishment that will provide the real value, he maintains.