As Canadians celebrate a national birthday and share a most welcome holiday, a lot of that togetherness will take place online, using social media tools and mobile communication devices. 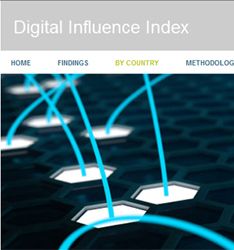 After all, we are one of the world’s most wired and most social networked countries.

But a new digital portrait of our media and technology habits shows that even as we continue to embrace new information and communications platforms, we are reaching a saturation point in some ways — people share too much personal information, and not much of it is particularly interesting.

TMI – too much information, flowing from user generated content portals like Twitter or Facebook – is just one of the findings from a new study conducted by global communications consulting and PR firm Fleishman-Hillard, and its look at ‘Digital Influences’ on the Canadian personality.

Influence here means the amount of time spent with a particular media device or platform, and the amount of importance or attention paid to it.

The study, conducted by Fleishman-Hillard in conjunction with Harris Interactive, looked at how we use the Internet, the ways we consume media, the degree of adoption of various digital behaviours, and our involvement in social networking.

It’s the first time the study looked at Canadians in this way, and the first publication here of such results. Later this year, a series of special roundtable discussions and users forums will be staged to dig a little deeper into the survey results, and how we can all learn from the detailed digital portrait of ourselves and our behaviours.

For now, some general conclusion can be made:

2.   Canadians are Sociable: Sixty-nine per cent of Canadian consumers have a Facebook account – the average across the surveyed countries is 47%. Although, we are cautious about using social media and how much we reveal about themselves.

3.   Canadians Seek Accuracy: In Canada, consumers are more likely to identify and follow a couple of trustworthy sources for the most accurate information on the Internet.

4.   Cautiously Trusting: We’re most likely to seek advice from others when making a   decision, and we value conversations with friends, families and co-workers when it comes to decision-making.

Analysis of the survey results shows that more than half of us (53% of the study’s respondents) think we share too much information about our lives online, and only around one-third of those online find user-generated content interesting.

Yet we do, for all that uninteresting stuff, spend a lot of time on line – Canadians rank #2 in the surveyed countries as far as time spent consuming media, and a third of us do it on the Internet (34%) more than any other platform (just ahead of TV, at 33%).

But what’s worse than boring? No job!

Some 20%, or about a fifth of us, worry that expressing personal opinions online can have a negative impact on reputation, public persona, career or financial security!

“Canadian consumers are comfortable yet cautious when it comes to using the Internet. We’re the second most active in terms of social networking and we call the Internet our most influential source of information,” David Bradfield, senior partner and global chair of Fleishman-Hillard’s digital practice, says in a phone interview.

The caution Bradfield speaks of is manifests itself in what he calls “good judgement” in how we assess relationships, and how we balance real world influences and friendships against those in the digital world.

(A friend of mine, unaware of the survey, voiced his approach to social media with that tone of cautious embrace: An active Facebook member with some 1,500 friends, he still avoids posting his personal weekend plans: “If I say I am going to be at so-and-so’s party on Saturday, I am also saying where I an NOT going to be…”)

That perception of online vulnerability means he holds back on some posted content, even as he embraces the overall concept.

“Our responsible, protective nature manifests itself online,” Bradfield elaborates. “We look for accuracy in our representations, we are very much attuned to putting real person forward. We’re all learning how to share, and we are learning that in some cases, what we post means we may not get a job. In another context, though, maybe what you do with managing your online persona will impress a different boss.”

In that admirable self-regulation is some risk, however.

While a sense of online privacy is good, it should not replace or be a substitute for more robust safety and security standards. Canadians are aware of the double-edged sword of online activity – we embrace social media, but we are still hesitant to get into e-commerce, shying away from online purchasing more than most.

Getting Our Cellphones To Work

Meanwhile, as wired and networked as we are, many of us still don’t get how our own cell phone works!

An average of one-fifth (21%) of mobile phone users do not use the features or full capabilities that come on their mobile gadget.

It’s a global malaise – Canadians and Germans are least likely to take advantage of their mobile device’s capabilities, followed by users in France, the U.S. and the U.K., who use an average of about 40 percent of device functionality.

The survey found big gaps between the capabilities and our playing games, recording/playing video, accessing the Internet and sending/receiving e-mails. It may also be an influence on the amount of mobile commerce and retail interaction here, still a bit low compared to many other countries.

Now, we all know at least a few ‘older’ folks who just ‘don’t get’ watching TV on their handset, but it is not clear to me whether the survey reveals we don’t understand our cellphone’s capabilities, or we just don’t want them even though they are built right in.

Bradfield commented on this apparent Canadian lag in mobile behaviour and full use of portable media, saying that “a lot of it may come down to regulation, and access to different types of cellphone plans (data and pricing).

“How does the CRTC actually impact what we can afford or are allowed to do?” he asked rhetorically, but not without irony considering other reports that have also said Canada’s lags far behind other countries in terms of phone pricing and data packaging.

“Lots of devices now are very data-intensive,” he noted, “so there is a natural correlation between what we pay for our services and what the rest are doing.”

(It’s true – my buddy in the States is always rubbing it in, talking about his cellphone plan that still gets him unlimited international calls from home and unlimited data on the go. I can only nod in awe, and say to him that his days of ‘all-you-can-eat’ are likely numbered. We are all taking up way too much bandwidth for it to be free – or even cheap – for much longer.)

Reviewing the Results – Acting on Them

As it is want to do, Fleishman-Hillard has some advice for marketers, communicators and other opinion shapers: close the gap.

“While consumers go online, marketers aren’t making the move to digital fast enough,” Bradfield stated. “They need to realign their marketing and communication programs or risk irrelevance in the consumers’ mind. This report shows just how engaged consumers are with new channels, and new media. Canadian marketers and advertisers face the challenge of keeping up, and deciding how much to spend on social media – or even their own website.”

Acknowledging that while much of the media landscape – whether in horizontal or portrait mode – is still in flux, some core behaviours have been identified.

Relationships, community, integrity, honesty are among the respected principals. Internet and mobile consumption will only grow, and the mix of ways to connect with a customer or reach out to another citizen will be based not just on good technologies, but on open relationships.

“We’re on a launch pad,” Bradfield said. “There’s great potential coming out of this study, and we want to continue to explore and dig into the online behaviours of Canadians.

“In the fall, we will pull together a series of expert roundtable, with people from mobile marketing, with people from development, with ad and media people and we’ll gauge the overall industry response. We’ll have workshops that challenge or validate our findings, based on real-world observations. And we’ll talk about what’s next.

“It’s not just about the technology, but about the user’s behaviour once they have access to that technology.”

So, what’s your tech? And how do you behave with it? Are you fed up with Facebook? Tired of Twitter? Or fully embracing the current media tools, and eagerly awaiting some more? Paint your own digital portrait and share your comments and feedback with us.

To learn more about the study, and to see video commentaries by media researchers at Fleishman-Hillard Canada, visit digitalinfluence.fleishmanhillard.com/by-country/.

The research conducted for Fleishman-Hillard studied digital behaviours in Canada, China, France, Germany, Japan, the UK and the United States, countries that make up some 48 per cent of the global online population. The survey polled more than 4,000 people between December 2009 and January 2010.

Why the iPad makes women iRoar!