Sharing personal media files among various home consumer appliances via Wi-Fi is a convenient way to get the most out of your digital pictures, music, videos, and the like.

Getting from your desktop PC or Mac or even smartphone to your home HDTV, stereo or digital picture frame, using a device like the Wireless Media Stick from HSTi, is all about enjoying media easily. 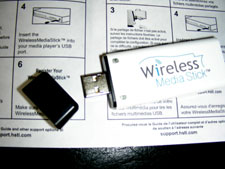 The Wireless Media Stick from HSTi

The Wireless Media Stick made a splashy debut at the big Consumer Electronics Show a while back, and since then, both its online and bricks & mortar sales have taken off.

Not surprising, really, ‘cuz of all those cell phone snaps and digi-camera shots, downloaded tunes from various sources, digitally delivered videos, TV shows, movies and more we have to rassle with these days.

There’s no memory per se in this USB stick, but there is some wireless technology and enough smarts to act in a client-server type relationship, allowing access to your folder and files.

The HSTi device acts like a network bridge between your computer and any device with a USB port (a TV, DVD or Blu-ray player, gaming console, digital picture frame, portable tablet and many others). As long as the device can read files and play them back OK, the Stick delivers to it any media file you want that’s on your computer.

There are two Wireless Media Sticks right now, the original V 1 $99 and the newer V2, $119. The same basic concept, in a slightly slicker package – the company says the newer version has a better set-up process, but I’ve only tried the new one, so….more on the set-up below.

But don’t be surprised if the company has many more wireless media ideas in mind.

Adaptations of this first Stick will make it more flexible for the home mediaphile, getting access to, say, video-on-demand and online streaming services through a ‘StreamStick’.

In more commercial applications, an enhanced Stick for digital signage and out-of-home advertising displays could be very popular among small and medium sized businesses, too.

And, if you think about putting a Stick on a wider area or urban Wi-Max network, its ability to access remote media (or other?) files on numerous, non-wireless devices across a much wider geographic area than your home is pretty cool.

HSTi’s pedigree sets it up well for these and other ideas.

The company senior management team certainly has the tech bona fides, if not the international ones, too.

Chief Technology Officer Dale Hird founded HSTi in 2009, building directly on his experience and contacts from another Canadian company, Meta Media, as V-P, Technology Marketing and Sales there. That company’s grown from essentially a print production firm to a broader based digital development company, working in IPTV, digital media and video compression solutions.

HSTi Managing Director Harry Diamantopoulos, another Meta Media alumni, graduated from nearby Alberta Institute of Technology Information Technology, and went on to work as senior systems analyst on key IT systems like file servers, networking and supporting technologies before Meta Media and HSTi.

Ramesh Uppal, HSTi’s President and CEO, is a graduate of both the University of Delhi, and the Maritimes’ Dalhousie University.

He was a vice president with Wi-LAN for a while, the big Ottawa-based tech patent and IP company, and he’s still with Siconix, like HSTi a Calgary company also involved with wireless applications and portable network technology.

With the HSTi Wireless Media Stick, these three are positioning their product as a key accessory for tech and media fans.

It was Dale Hird that drew it to our attention, and he sent one over for a looksee. 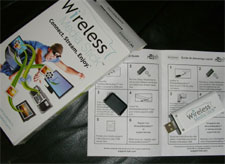 The package is certainly sensible, just one USB dongle and a thin instruction leaflet. The minimum requirements are, too: a home computer and wireless network, a target USB enabled device.

First, you just plug the Stick into your PC’s USB port.

There’s an on-board pre-loaded set-up wizard there, and the menu’ed activities come up from inside the Stick. Note that the dongle appears as two drives on a PC; this could confuse other drives or other operating systems.

First, you designate files or folders that can be shared, much like any computer can do anyway.

Of course, if you don’t share the folder, it won’t be seen by the intended USB enabled device. Likewise, those folders that are shared are open to the network, so make sure your wireless security is already good.

There’s also a list of available wireless networks and a log-in process to go through, using your existing home network password to give the Stick its own access. Your wireless router (or computer) firewall needs to be turned off.

The set-up takes fifteen minutes or so, depending on system speed and operating parameters, as it finds the folders, updates directories, identifies wireless parameters and so on.

Once that’s done, eject the stick and take it to the USB enabled device. Plug it in, and you will get access to your designated media files and folders through that device’s interface and navigation, which is tricked as it were to see the stick as much as a storage device as a wireless one.

Its wireless capabilities extend through the 802.11a/b/g/n protocols, but it does not have its own media playback capabilities. They are in the USB enabled device, so check your DVD player, TV or digital frame to see its compatibilities with various media formats.

For example, there’s an Allurtek digital picture frame with USB port that only plays photos that are jpg files, and only non DRM mp3 music files. Its video is limited to AVIs, using the DiVX codec, so playing TV shows purchased from iTunes poses a problem in this situation.

So you do need to do a little homework to make sure the Wireless Media Stick is right for your needs, but if so, I think you’ll really like what it can do for you and the media you love.

The price seems a little steep, I know, considering some other gadgets do some similar things – Apple TV is about the same price, but it too has tech and format compatibility issues.

Or the Orb, a version of which I call the analog equivalent to the Stick’s digital.

The Orb, also a Wi-Fi enabled media device, doesn’t plug into a USB port; it connects with the red, white and sometimes yellow consumer RCA plugs on a home stereo or TV. So the Orb gives you wireless access to computer media files which get shown or played an older analog device.

The HSTi Stick gives you that access through newer USB-enabled ones. 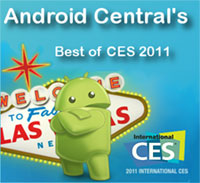 HSTi has now released an Android app, so smartphones (with USB port and Android OS) make use of the Stick as well, and gain access to sharable media files.

It makes sense that BlackBerry and iOS versions are in the works, along with its other innovations.