There’s little doubt that more and more folks are using social networks, and getting an amazing ability to connect with people around the world as a result.

But just how sociable are social media networks? Would we invite them to be our friends? 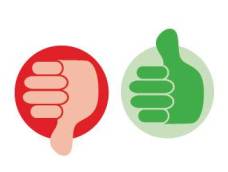 Social media services could use a 'like/dislike' button, too.

When you get down to the people who value the word “close” before the word “friend”, the nature and structure of many social networking services (SNS) may not be a good match.

Seventy-five per cent of people prefer a few close friends to a large network, says a new survey on SNS usage. This is especially true in North America, where 87 per cent opt for a small circle of friends rather than a large one.

In Canada, that desire goes even further with some 89 per cent of online respondents saying they’d rather have a few close friends than a large network of friends. 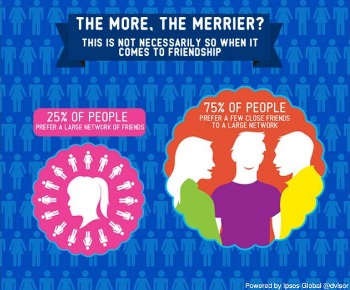 Many people prefer a few close friends to a large social network, says research by Ipsos.

There’s a depth and breadth to close friendships that cannot be easily replicated online, they say. Face-to-face exchanges, with their added emotional and physical context, can foster a better ‘people-reading’ with more substance and potential reward.

Sometimes, however, we can seek that reward too quickly, too instantaneously for our own good.

Another survey, Hyperconnected Lives, said “the impact of networked living on today’s young will drive them to … instant gratification, settle for quick choices, and lack patience.”

We’re inclined to use the easiest forms of communication available (like texting or social media), even though that might not be the best way to get the desired – or needed — interaction. 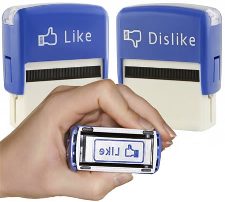 Retail accessories confirm that social networks are ubiquitous these days, but are they addictive, too?

Communication is a two-way street; best accomplished in an equitable exchange of content and context. Some social platforms just aren’t set up to do that, whether the contact is personal or professional.

For all a social media network’s ability to foster connectivity, even business owners and senior executive/decision-makers said in the SNS report that they prefer a few close friends over a large network of casual connections.

Neurological investigation is in its early stages, but it’s already showing that the way our brains work is being affected by online activity, especially that of kids.

Studies on the impact of heavy media and technology on cognitive development show a limited attention span in some users. Lower comprehension and poor focus in the classroom can result, and a greater risk for depression and diminished long-term memory is being linked to the use – or too much use – of hypertext links and multimedia content.

While citing many benefits to online activity, pediatricians are also concerned about cyber-bullying, sexting and a so-called ‘Facebook depression’ syndrome, resulting when a great deal of time is spent in socially intense online environments.

Just how much time spent online is ‘too much’?

Again, an area of controversy and discussion, but one in which researchers point out that people who can’t get enough social networking can show signs of withdrawal and mood swings – just as addicts do.

It’s not just about minutes or hours or days spent online (or with any addictive activity), but the kind of attitudes and activities that accompany such usage.

For example, researchers are asking users if they spend a lot of time thinking about Facebook, or any social media service. How often have you felt an urge to check your social media site, or do you get restless or concerned if you are unable to for any length of time? Do you feel good (or bad) when you use the site?

And the classic addiction question, ‘Have you tried to cut down on usage (and failed)’?

The replies they often get to such questions have led some researchers to believe that a clinical addiction to Facebook or other social networks is not only possible, it is a growing concern.

Only increasing those concerns are findings that indicate of the 20 million minors who actively used Facebook the past year, 7.5 million—or more than one-third—were younger than 13 and not supposed to be able to use the site.  So says marketplace watchdog Consumer Reports, in a look at children and Facebook. Not surprising then that some want to ‘have a talk with’ Facebook, and try to help everyone get the most from their friendship by minimizing the bad things and maximizing the good.

In his new book, Talking Back to Facebook, James P. Steyer tries to do just that. He’s founder and CEO of an organization called Common Sense Media, and when he talks about ‘talking back’, one realizes he’s not saying you should ‘dis’ the network.

Just have a good conversation, like between close friends.