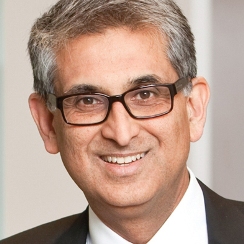 Rogers Communications President and CEO Nadir Mohamed is leaving the company in 2014.

Nadir Mohamed, the President and Chief Executive Officer at Rogers Communications, is leaving the company – however it’s described.

He has announced his intention to retire in January 2014, after some 30 years with the company, surprising most industry observers, if not many in his own company.

The announcement and impending retirement come at a high point for the telecom and media conglomerate he heads: its latest financial statement, for example, reports an operating profit increase of some seven per cent, with earnings per share up more than 30 per cent.

Since Mohamed became CEO in March 2009 the company has delivered a total shareholder return of 81 per cent.

It’s during his tenure that the company became the country’s largest wireless carrier.

Now, some may have more colourful terms to describe the company and its services (or lack thereof, in some cases), but Mohamed’s corporate accomplishments and professional development speak for themselves.

No matter its many activities, the wireless side of the business is where the real action is, and Mohamed has been closely involved all along: the Rogers wireless division represents some 65 per cent of overall company business, with cable and media combining for the other 35 per cent.

Wireless and mobile data continues to be a key driver for corporate growth, and a key revenue generator for the company, as it has been throughout Mohamed’s time there.

It was 2004, for example, when Rogers Wireless was able to acquire Microcell, thanks to spectrum allotment and cap changes by the federal telecommunications regulator. That not only allowed Rogers to buy the upstart competitor, it further reduced the number of competitors in the marketplace overall.

Continuing to build its wireless business, Rogers has unveiled and launched its LTE (Long Term Evolution) network strategy in recent years. It has also just completed a deal to buy unused wireless spectrum from Shaw Communications (and Rogers is buying Shaw’s Mountain Cablevision system in the Hamilton area.

Mohamed is on record as saying the unused spectrum will be deployed as part of Rogers’ LTE plans, and will contribute to its ability to support continued consumer data use and download activities.

Although not seen as an avid sports buff when first hired, Mohamed has overseen a transformation that turned a phone company into a North American sporting giant.

Mohamed ruled Rogers as it entered into a partnership with rival Bell Canada for the acquisition of Maple Leafs Sports and Entertainment. The two companies formed a holding company to govern their combined net 75 per cent stake in MLSE, and the pro sports franchises that it owns.

Olympic games coverage and a precedent broadcast consortium partnership was another highlight during his term, and it was Mohamed who hired established broadcaster Keith Pelley and gave him overall responsibility for Rogers Media properties, including Rogers Broadcasting, Rogers Publishing, Rogers Digital Media, Rogers Sportsnet, the Shopping Channel, the Toronto Blue Jays and Rogers Centre.

The Blue Jays, having spent hundreds of millions of dollars on new player contracts this past off-season, are seen by many as favourites to get to, if not win, the World Series, something the team hasn’t done in 20 years.

“Nadir is a highly regarded executive who has delivered strong results and substantial value for more than a decade,” said Alan Horn, Chairman of the Board, Rogers Communications Inc. in a statement. “Thanks to his disciplined and strategic management approach we’ve strengthened our core business, solidified our financial position and set Rogers up for long-term success. The board is grateful for his significant contributions and looks forward to working with him to ensure a seamless and orderly transition.”

Rogers Board of Directors will appoint a search committee and select a search firm to begin an international search.

Neither Edward nor Melinda Rogers will put their name forward as candidates, but they will both be involved in the search process, as will Mohamed.

“It’s truly a privilege to work with the Rogers family, the board, the leadership team and our employees to deliver for customers and shareholders and to set the foundation for the future,” Mohamed said in a statement. “The Company has a seasoned executive team, the best asset mix in North America, the most advanced networks and the best platform to lead and drive the next wave of growth. The company’s in great shape and it’s time to start the transition to the next generation of leadership. Over the next year I look forward to delivering strong results and to ensuring a seamless transition.”

Mohamed also sits on the Board of TD Bank Financial Group and Ryerson University.

He lives in Toronto.

Digital Advice for Valentine’s Day: Don’t Give Your Love – or Location – Away

BlackBerry Z10 video review: a new look for the brand, but is it enough?