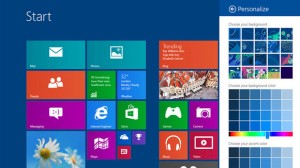 By and large, Microsoft has tried to be attuned to its users and has incorporated various updates to Windows 8.1 which, while currently still a preview version, shows promise in the evolution of Windows.

The reality of Microsoft Windows is that when a new operating system comes to market, it takes about a year for various bugs, fixes and improvements to come to users in the guise of an SP or Service Pack. In the case of Windows 8, which was released in October 2012, there have been mixed reviews.

While many found the new touch-focused OS refreshing, there were also a substantial number of critics that chastised Microsoft for having two interfaces (Desktop classic and tile), killing off the Start button and menu as well. Now available to all Windows users as a preview (meaning, install at your own risk), Windows 8.1 is set to right some wrongs as well as make the experience more intuitive.

The free preview was made available to all existing Windows 8 and Windows RT devices and aside from various bug fixes and system wide improvements, Microsoft has revealed some key new features that make upgrading to Windows 8.1 well worth it. Windows 8.1 is expected to be completed and shipped to OEMs in August, meaning that the finalized version should be consumer-ready by October or around one-year since Windows 8 debuted.

“It’s Windows 8 even better. Not only will Windows 8.1 respond to customer feedback, but it will add new features and functionality that advance the touch experience and mobile computing’s potential. Windows 8.1 will deliver improvements and enhancements in key areas like personalization, search, the built-in apps, Windows Store experience, and cloud connectivity. Windows 8.1 will also include big bets for business in areas such as management and security,” said a post on Windows blog.

The controversial Start Button, which was jettisoned when Microsoft made the transition from Windows 7 to Windows 8, is coming back but the functionality will be slightly different.

This divisive feature returns to Windows 8.1 but isn’t attached to the Start Menu (which I suspect is what users were really clamouring for). The Start button will aid users in moving from the Windows 8 Live Tiles screen to the Desktop. I’ve gotten used to life without this feature on Windows 8 and I while it is nice to have, it isn’t something I found myself using a lot.

The Windows lock screen can now be turned into an interactive slideshow by using user’s photos as animated wallpaper. Photos to be used can be stored on the PC or on the user’s SkyDrive account.

Live Tiles, which are the interactive squares on the home screen now come in larger and smaller icon sizes. The larger size helps for apps that need to push more information such as weather apps and stock tickers.

The universal Search function in Windows 8.1 is backed by Microsoft’s Bing service and will provide global search results powered by Bing, “in a rich, simple-to-read, aggregated view of many content sources (the web, apps, files, SkyDrive, actions you can take) to provide the best “answer” for your query,” says Antoine Leblond, Corporate Vice President, Windows Program Management Microsoft.

The new user interface for Search is hit or miss. Some searches will yield a nicely laid out results page, complete with photos and various bits of information that serve as logical departure points for searches. Oftentimes, the results aren’t as exciting as the Marilyn Monroe demo that’s often used. 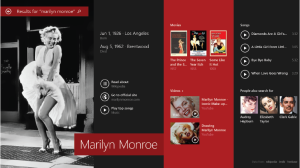 Speaking of SkyDrive, Windows 8 will bring tighter integration as well the ability to quickly save files to SkyDrive and setting up new devices will automatically update the user’s settings and preferences.

Some of the biggest features of Windows 8.1 are focused on businesses. There’s NFC tap-to-pair printing which enables NFC (Near Field Communication) outfitted PCs to link to compatible printers with a simple proximity tap.

Wi-Fi Direct Printing allows for quick printing on wireless networks without having installing drivers. This is a superb feature for travelling users who need quick access printers. I tested this while traveling in an airport lounge and it worked on one out of three of the available printers.

BYOD or Bring Your Own Device proponents will like the various corporate focused features offered by Windows 8.1. Improved IT controls make it possible for companies to control the layout of user’s homescreen for uniformity and easy access of key corporate apps.

Windows 8.1 also removes certain features. The Photos App in Windows 8 integrated images from Flickr, Facebook and other sources into a very slick and interactive interface. For some reason known to Microsoft alone, these services can no longer be integrated so Photos App just shows what’s on your PC and on Skydrive, which is boring. Hopefully, Microsoft finds it worthwhile to bring these features back.

Windows 8.1 did not really change the way I used my Surface tablet since the functionality of the OS remains largely the same and is as predictable as the previous version.

Background software updates and system updates (i.e. Windows Defender) were a nice surprise, specially since I’ve gotten used to having updating these almost every other day. The ability to resize the tiles is also better for organizing applications into more coherent clusters.

The overall speed and launching of applications seems a bit faster, running through open applications and is also somewhat smoother. Battery life seems to be improved as well, which speaks to better efficiency and resource management.

Windows 8.1 preview also removes the Windows Experience metric that tells users how capable their device is is for running Windows.  There may be a good reason for these omissions and they may very well make their way back to Windows 8.1, but it is nonetheless startling to see an update that removes features that were working just fine.

Kids and Learning: Is Technology Helping Them?