She’s been working with advanced technology for her entire professional career and she’s succeeded in an admittedly very male dominated industry. 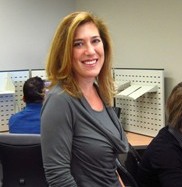 But when the time came to balance personal life and raising a family against professional opportunities and a successful career in progress, she had no regrets over choosing family first.

“There’s no right or wrong answer in having to choose between personal and professional life, but I knew in my own situation that I did not have kids just to see them raised by someone else,” Steiner says. “Now, I had twins, so that’s something I wasn’t going to give up easily.”

She did end up giving up five years of her career to be with them (much longer than first anticipated).

And she gave up her high-profile TV job and the chance to stay connected with a tech-driven industry that continually undergoes a sea change in both the tools and techniques it uses.

Five years is like an eternity in tech and media, so the decision was not an easy one.

“I had a very real fear that I would be left behind,” she recalls. “The industry changes so quickly, but I thought, ‘Well, I learned the first time – how hard can it be to learn again? I’ll figure it out’. That’s just me, I guess.”

While there are some legal protections for women facing family/work decisions in the workplace (a woman can take mat leave without worry of being left behind when she leaves or losing opportunities when she returns), Steiner understands that each family will make their own decision, based on their own situation.

Her situation now (the kids have grown up and are out of the home) is as digital entrepreneur.

She’s president of Percy3D, a company that uses the latest 3D visual effects and digital media technologies to create PercyVites, a digital greeting card that replaces paper with immersive e-invitations for tech-savvy kids and their digital families.

What’s more, her company has relationships with several popular children’s TV shows, including Arthur, Johnny Test and Caillou, and it’s using licensed clips from these well-recognized animated characters in its party invites and online communication products.

Of course, she’s combining many of the skills she amassed during her career; the technical side of TV production and computer animation, and the creative: making fun and entertaining content.

But she is clear that she cannot do everything the company needs to be successful: Jokingly, she says “I am the dumbest person in the company!” but she clearly means that she has skills other staff members do not, and that her staff has skills that she does not possess.

“I know how to work with tech people, but I do not know how to write code. They know how to do great 3D animation, but they are not the deal-makers. Any business owner should know their own strengths and weaknesses. Working well together is about mutual respect, and it shouldn’t be about male or female.”

That being said, Steiner sees a little bit of the ‘male – female’ dynamic coming into play in many businesses.

“I often find it more efficient when working with other women,” Steiner says “Are we more detailed oriented, more able to grasp the ramifications (of one course of action or another) and play it forward? Maybe…

“I’d like to say ‘I can’t see where gender fits in’ but it does. Are we more nurturing? Well, thinking of male bosses, there’s not many who care how I feel. My take as a boss is that to be effective, the staff has to be happy in their own life, and that it does matter.”

As far as she has come in her career, and as high women have risen in the industry, Steiner knows there are still challenges to be faced. She recalls with a laugh how often she has had to remind other men in a business meeting that they are together for the meeting, and not for a date!

“We all have our tricks, I guess, but it amazes me still how often, in the first five minutes of a meeting, I kind of bring up my husband, or family; it’s almost subconscious, but I feel I have to sometimes.” 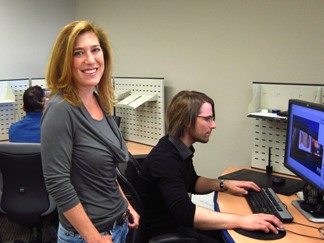 But, she said that should not hold women back. If a man underestimates a woman, she says, fine, let them. They will be the ones to pay the price.

“Yes, appearances do play into it, but it should not be a disadvantage (to be an attractive woman). So use it to your advantage and don’t let it hold you back.”

Her attitude is positive, and her words encouraging. But Steiner has seen another reality of women and technology and she is “appalled at the situation.”

She mentions a provincial technology association to which she belongs, and from which she continues to benefit.

It counts more than 70 business leaders and technologists among its membership – but only three women!

“I was looking around the room and I found it shocking that so few women were there,” Steiner recalled.

The association sees it too, she noted, and it is desperately seeking new female members. While mentoring, support and incentives are being considered as ways to build up that membership, Steiner refers to her own experiences as a motivator.

“Every mistake I’ve made has taught be something. People call me fearless, but I stare at the ceiling on far too many nights. It’s tough to fail; I hate it. But if you are willing to risk and to work hard, you will see the reward.”

Woman or man, we could all make use of such advice.