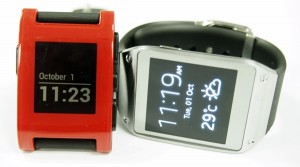 Pebble and Samsung’s Galaxy Gear are two of the newest devices aiming for the smart watch throne. While their functions are similar, their approach is wholly different.

The smartwatch space is still very new. Pricing is all over the place with the Pebble starting at $150 and some other smart watches like the Galaxy Gear  and the Qualcomm Toq are well over the $299 threshold. Features and functionality are somewhat similar, with smartwatches acting as adjunct devices to smartphones or acting as remote controls for music, cameras and serving up notifications from various apps and social media websites. Pebble is very much a grassroots approach to the smartwatch. being borne out of the KickStarter crowd funding phenomenon, it has transcended cult status. Samsung’s Galaxy Gear is the perfect example of a corporate creation, an electronic giant’s first attempt in a product race. We checked both out for a showdown. 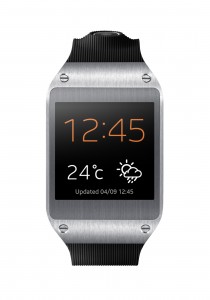 Samsung’a Galaxy Gear looks and feels like a designer accessory. Cast in stainless steel, featuring an ultra-vivid OLED display as well as a clever strap that integrates a microphone and a camera, it can easily be mistaken for something created out of MI-6’s Q Branch for one 007.

Samsung didn’t just bless the Galaxy Gear with its latest technologies as well as millions of advertising dollars, it also created an ecosystem of Galaxy Gear Apps and even a specific app store for developers who want to explore what the watch can do. The Samsung Galaxy Gear looks and feels exclusive and because of the limitations currently facing it today, it actually is.

You can only use the Galaxy Gear with certain models of smartphone, most notably the Samsung Galaxy Note 3. Which has the right type of processor and internals to support the Galaxy Gear. The fact that it isn’t backwards compatible with earlier Samsung Smartphones really limits the Galaxy Gear’s appeal to a very select group of users. How to convince developers to spend time and effort catering to this select group will be a challenge. Still, looks like Samsung is off to a very good start as it just announced it has in the first two months, sold 800,000 of these Galaxy Gears.

After spending time with a pre-production Samsung Galaxy Gear and my impressions were that it was surprisingly heavy and for some reason the strap would not close, so I could not actually wear this bit of ‘wearable’ tech.

In tandem with the Galaxy Note 3, the Gear performed rather well and did  a decent job of pushing notifications, updating me on the weather and controlling some of the functions of the large smartphone.  Still, at the end of the day (when the Galaxy Gear has to be plugged-in) it all feels rather like a prototype. Samsung’s got a few elements of the smart watch right but there’s loads of room for improvement, starting with the price. $300 is too steep for something that feels like a prototype. 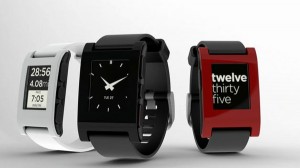 The Pebble smartwatch is relatively cheap at $150 and a shoo-in for a great holiday stocking stuffer. It is a monochrome E Ink watch that pairs with iOS and with Android smartphones. While the lack of colour on the screen might turn off some uses looking for more flash, it actually gives the Pebble a 6-7 day battery life on a single charge.

Out of the box, the Pebble can quickly connect with most Android smartphones and iPhones and you can customize the watch faces, use it to get myriad notifications, answer or reject incoming phone calls, as well as control your music playlist. Sure, it is made mostly of scratch resistant plastic and it may not look or feel as premium as the Galaxy Gear but it is intrinsically more developer and user friendly right out of the gate. There have been 190,000 Pebble smartwatches sold, half of which were to early KickStarter backers.

Pebble’s owners have focused on the software aspect and have continuously improved tools for developers to do more with the device. iOS has Notification Centre, the nerve-hub of all incoming messages and mail, now integrated into Pebble so there’s a greater deal of refinement in the types of notifications and controls for iOS users.

The Android piece is also pretty good. I’ve used the Pebble on half a dozen Android devices of varying specs and the experience has been consistently good. There’s also a possibility that Pebble may be made to work with Windows Phone and even BlackBerry in the future, which makes it a true open source option in smartwatches. 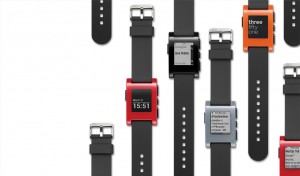 In the end, users will buy what works best for them. Anyone invested in the Galaxy Note 3 and who has the extra dough can enjoy the exclusive feel and functionality of  having a Galaxy Gear.

Users that have iPhones or other Android smartphones will be satisfied with the Pebble smartwatch provided their expectations are for a user-friendly device with great notification and control functionality with a focus on software.