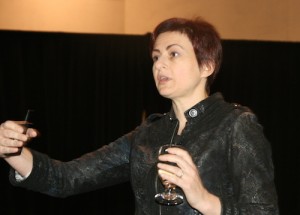 Dr. Nadia Shouraboura is the CEO of tech-savvy retailer Hointer.  The company has its own fashion clothing storefront and test lab in its home base of Seattle, WA, but also licenses its technology, which includes things like scannable eTags, to other retailers.
Shouraboura has had an interesting rise in the technology world.

Born in Soviet Russia, she started out as a software development engineer. She holds a PhD in mathematics from Princeton, where she was offered a full scholarship. During that time, she conducted research at AT&T Bell Labs and co-founded Starlight Multimedia. In 1994, she joined technology startup Diamond Technology Partners, working with a variety of major retail companies. She’s also held positions at Mobilocity and Exelon.Her highest-profile tech position prior to starting up Hointer in 2012, however, was as Amazon’s technology vice president of worldwide operations.

Tell us how you got your start in the technology industry.
I was born in Soviet Russia, and pursued my education in mathematics and science in the city of Moscow. In 1987, I emigrated from Russia to Israel, as a software developer working on Computer Aided Design systems for industrial robotics.

As a female business owner/founder, do you find you face certain struggles? Especially in the technology business, which is known as a male-dominated industry?

I actually think it’s a great advantage for me. I love shopping. I love retail; it’s a passion of mine. And I also greatly enjoy technology. I started my career as a software development engineer. So for me, being passionate about the retail side, and having knowledge of technology was a great advantage. And it’s something many men don’t have.

You showed a video during your seminar at DX3 Canada, which took place last month in Toronto, ON, that your 17-year-old daughter created for her class. Would you encourage your daughter to pursue business ownership in the future?

[The eTag concept] was originally her idea. The whole thing started when she went to a store and scanned the QR code and it led her to nowhere; to some company’s Website and that was it. And she had an idea that it would be really cool if scanning the QR code would do something cool in the store. She very actively participated in the design of the company. She brings many friends to the store and they all shop here and give us ideas.

Are you focused, then, on that younger generation?

A lot of the experience is designed for her generation, the younger generation. For example, she is focused on how to add social media to our experience. So you can tap and see that all of our applications are connected with Instagram and Facebook and Twitter. She helped design that to great extent. Because to her, that’s how she shops.

What advice would you give to other young budding female entrepreneurs?
It’s not easy to be an entrepreneur. You end up doing absolutely everything from cleaning the office to taking the trash out, to designing and inventing the next thing. So you just have to be very passionate and patient about what you do.