Connecting with some of the most provocative, innovative and engaging people on the planet is always fun, but to be honest, it can be a bit expensive, too. 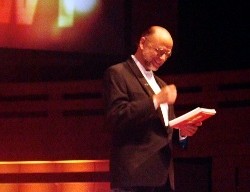 Moses Znaimer on stage at Koerner Hall during ideacity.

Especially when the engagement takes place during multi-day ticketed events, which can cost attendees hundreds or even thousands of dollars!

So it is with some pleasant surprise that news of a freely available, widely distributed and live webcast from Toronto’s ideacity arrived this week.

It’s the 15th anniversary of the thought-fest known as “Canada’s Meeting of The Minds”, and for the first time, the entire three-day ideacity conference will be live streamed and even better, it’s absolutely free!

It all starts next Wednesday, June 18th, bright and early at 8am (five am for folks out west – viewers in BC, by the way, will get the webcast thanks to an arrangement with the high speed network there, BCNet, and the educational institutions that are a part of that broadband network)!

For the first time, and for the three full days that the event runs, we can all join in – using connected or mobile devices at work, at home or on the go.

Visitors will connect with a newly-redesigned and improved website, ideacityonline.com, which now incorporates a mobile compatible responsive design, optimized for both iOS and Android devices. 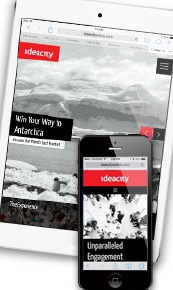 ideacity will be webcast and streams optimized for mobile devices

Developers at the site, including digital media director McLean Greaves, talk about enhancements to the video streams, as well, with higher resolution clips and smoother streams being delivered, thanks to some new back-end capabilities.

It’s not just about the special 15th anniversary webcasts, although that is surely a key driver for the timing of the website launch: ideacity is building an entire online video archive of previously unpublished talks, and adding some new search or recommendation engines to make finding all those videos that much easier.

The folks at ideacity say that by the end of this year, their entire inventory of presentations and performances (musical and entertainment interludes are a big part of the ideacity ‘flow’) will be available worldwide.

Of course, added social media integration with the site is intended to build engagement and a sense of shared discovery among the presenters and audience members.

On top of all that, the new ideacity website will serve up some value-added materials specific to each speaker, such as an online Books option to access and purchase their published works.

You really never know what to expect at ideacity: it is not built around any one topic, issue or technology, but it very might well touch on any and all you can imagine: artists, activists, authors, botanists, climatologists, cosmologists, doctors, designers, entertainers, inventors, magicians, musicians, scientists, spiritualists, technologists, and zoologists.

But to help guide web watchers navigate all that content, the webcast will be hosted by long-time media anchor Dale Goldhawk (now heard on The New AM 740 – Zoomer Radio), along with digital media practitioner and social media maven Ramona Pringle.

Along with the formal presentations, they will connect with special guests and behind-the-scenes action.

While there’s always a chance to learn about cutting edge technologies at ideacity, the conference is also a place to connect with important ideas at the heart of our society, and new perspectives on the human condition.

Just take a quick look at some of the topics of discussion this year, and you’ll get a sense of the scope of ideacity: DNA: Resurrection vs. Deconstruction and Radical Life Longevity; Climate Change: Alarmists vs. Sceptics; Civil Rights & Medical Marijuana; Innovation & Design; The World of Animals and Space.

A broadcast quality TV studio will be set up on location for ideacity webcasting.

The Executive Director and inspirational motivator at ideacity is Moses Znaimer, who has been directing and inspiring media developments in this country for decades: today, as head of ZoomerMedia and its stable of radio, TV, online and print platforms: yesterday, as the founder of Citytv, an early Canadian TV channel that’s now a national and global property; and one can see now, for tomorrow, as the head of the interactive online ideacity channel soon to come.

With ‘Project Ion’, BlackBerry wants in on the Internet of Things

Bobbi Dangerfield and the Global Sales Force at Dell