For tens of thousands of years, people managed to find their way in the woods.

When they found a useful route, handy shortcut or visually stunning scenic vista along the way, it was often marked or ‘blazed’ so others could follow the path or enjoy the scenery.

The early trailblazers used a bent branch, a knife-scored tree or a painted rock to help recall the route; even today, white patches or blazes on a tree truck indicate a main trail, blue blazes indicate side trails.

Now, committed explorers, dedicated hikers and weekend walkers can make their way along Canada’s oldest and longest marked footpath, the Bruce Trail, with even greater confidence.

The Bruce Trail Conservancy has released its first official app for the popular southern Ontario hiking route, and the new iPhone and iPad compatible mobile application offers on-screen maps of the trail that stretches along the Niagara Escarpment from Niagara to Tobermory.

All 890 kilometres of the main trail are covered, as well as the 400-plus kilometres of side trails, described Laura Tuohy, the conservancy’s membership co-ordinator. You don’t have to be a member to enjoy the trail, which gets over 400,000 visits each year, she added. There are about 300 access points along the trail, so hikers can take short and sweet walks in a morning or afternoon, or you can enjoy much lengthier and more demanding excursions lasting several days. 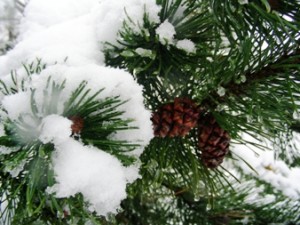 Winter is a wonderful time to explore the Bruce Trail; spring, summer and fall are not bad either.

Even now, in wintertime, the Bruce Trail is a popular destination. There are cross-country skiing and snowshoe outings every weekend now through mid-March, and there are extra special moonlight ski outings scheduled for the Scenic Cave area near Collingwood, ON.

As you might expect, no matter the season or time of day, cell phone reception is patchy or non-existent along long stretches of the Trail. Certain sections, such as the northern end of the trail on the Bruce Peninsula, do have 911 services. So, by all means, take your fully charged cell phone, turn on the device’s GPS function or Location Services and get used to its features.

But to get the most from the new Bruce Trail app, users should first download the most recent trail maps and trail information at home (details are cached on your smartphone).

The Bruce Trail App serves up more than 40 official topographic maps, as found in the printed Bruce Trail Reference, Map and Trail Guide. Each one is continuously updated with information and helpful navigational tools, all accessible with or without cell coverage. Updates on trail changes will be incorporated, so when you have cellular or Wi-Fi access, just open up the app and download the latest Trail data.

You can use either the Bruce Trail app maps, or Apple Maps own satellite photo views. The maps have a panning feature which tracks your location as you move; they can be used with North at the top at all times, or set to rotate to follow your current travel direction. 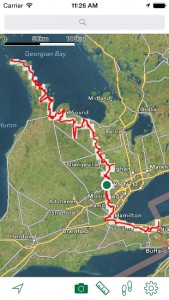 A new smartphone app provides maps, activities and information for hikers on the Bruce Trail

On the trail, users can calculate their hiking distances and track their location on the trail when using the GPS function. Lots of Bruce Trail enthusiasts are also big time ‘geo-cachers’, and they use their GPS features and Bruce Trail app to hide and find caches somewhere along the Trail.

App users also make extensive use of the Camera feature, which plots any photos you snap with your device and shows them on the Trail map; the app also allows hikers to share those photos via text message or email, or upload them to popular social media sites like Facebook, Twitter or Tumbler.

The Bruce Trail App is now available for $9.99 at the iTunes store; there are plans to release an Android version by late 2015 or early 2016.

After the app’s development costs are covered, proceeds will be used to support trail development and conservation work, which is handled by the non-profit conservancy along with the devoted efforts of local organizations and individual volunteers.

In fact, some of the earliest ideas for the Trail were triggered by a small group of volunteers and outdoor enthusiasts; among those early pioneers, noted Canadian artist Robert Bateman and Philip Gosling, who helped chart the Trail’s original course.

(About half the Trail crosses public lands; Gosling made many of the arrangements with the owners of private lands over which the Trail transverses. The long and winding path is divided into nine individual sections, each of which has its own unique geo-physical characteristics, and each of which is cared for by a local group of volunteers.)

The Bruce Trail app was developed for the Conservancy by Toronto-based Northport Systems Inc., which through its Fugawi label offers a wide range of desktop, mobile and Web-based navigation and mapping software products worldwide.

The company also provides GPS-related software products for land and marine navigation, vehicle tracking, and military applications around the world.