A Canadian company is a key partner in a new plan to use digital technology and mobile devices to reconnect kids with the real-world, so they can jump, swing, slide and play outdoors.

Biba, a Vancouver-based augmented reality game and mobile app developer, has partnered with PlayPower, a U.S. company that makes play, sport and recreation equipment. Screen time mashed up with play time is the goal on new Biba mobile apps and Biba-Activated playgrounds from PlayPower.

The partners want to ‘activate’ playgrounds across North America, turning them into an interactive environment, one accessed through mobile apps that add fun, gaming and adventure role-play to the merry-go-rounds, swings sets and slides.

The games are aimed at youngsters, aged 3 to 9. They offer up physical challenges suitable for the youngster, but for the most part managed by an adult in what the company calls “refereed play.” 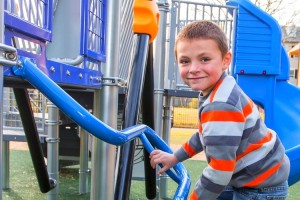 There’s a point and reward system built into the app that acts as an incentive for further play, and for sharing socially with other users.

Of course, there is a direct technical and commercial relationship between the app and the activated playground equipment, but some Biba games will be compatible with all playgrounds, even those that aren’t technically Biba activated, using generic “tagging” items in the app.

“We want to change what screen time means,” said Matt Toner, President of Biba. “Our games bring kids back outside and turn playgrounds into the ultimate destination for modern families to go for healthy, active fun. Thanks to our partnership with PlayPower, we think we’ve blended the richest parts of mobile play with the unadulterated fun of playing outdoors.”

(Biba is spin-off from Zeros 2 Heroes Media, an award-winning social media, entertainment and visual analytics company, also in BC, where Toner also worked. On the Biba team are other digital professionals, as well as cognitive psychologists, experimental designers and even a musician, all of whom share a keen interest in the conception, design and development of games for kids of all ages.) 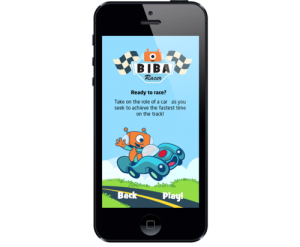 The app offers up incentives to encourage kids to play on swings, not just stare at screens.

Their work is at the leading edge of trends to use mobile phones and digital devices as more of an interface to other real-world activities, not just as a self-contained virtual space for data abstraction.

Rather than having activities, facts or figures served up virtually, an increasing trend in mobile development is to use the gadgets as a trigger for human activity, be it to exercise the mind or the body.

One may ask why kids can’t just go and play (and many people have asked just that for many years) without needing a new app, or a techno-gadget on which to run it: surely, there is a fine line between worrying about the negative impacts of technology on kids, and using technology reach and interact with them.

“Active outdoor play is essential to the development of healthy children. Getting enough active outdoor play for their kids is a problem with which most modern parents are familiar. Parents’ concern for their children is justified by research that shows kids are spending too much time sitting still in front of a screen and not enough time outdoors,” Lynne Vandeveer, Chief Marketing Officer at PlayPower, said when announcing the development company’s partnership. “The solution PlayPower has developed with Biba blends the technology-driven world that kids expect with the joyful outdoor fun that parents remember from their own childhood. We intend to change that by engaging modern kids on their own terms.”

Biba games will be coming to mobile devices later this year, the partnership has announced, and Biba-activated PlayPower playground equipment will be installed in city parks across the country. Biba games and a Biba-Activated PlayPower swing were demonstrated at the recent Game Developers Conference in San Francisco.