A Calgary-based live event and visual effects company is building a new kind of immersive entertainment experience and the engineered artwork will make its public blast-off this fall. 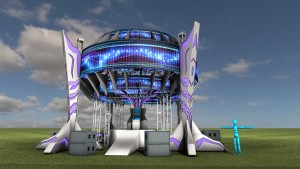 The winning team from Beama is being provided with budget of $50,000 for materials and artist fees to develop “a space ship”.

It’s being called Calgary’s Spaceship, but the real name of the installation is the Bass Ship, or more formally, The B.A.S.S. Device. It uses fully interactive audio-visual technology to engage and entertainment participants, and to get them to explore ideas about culture, communication, and civilization.

As the designers and builders at Beama Visual Environments keep saying, “There are no passengers on this spaceship. We’re all crew!”

That’s because every step, every action that a visitor (crew member) takes will trigger a sequence of combined audio, video and lighting effects. Just as every action taken by the crew of spaceship Earth triggers an effect.

Luckily, participants on the Bass Ship will be guided by visual cues from the ship’s computerized switchboards and control panels. The results will play out on its sound systems or be shared on across network connections, and the experience will take participants to some new and interesting places, the creators promise.

The creative development team from Beama is part of the Big Bang Residency Program at The Banff Centre, a kind of competitive pitch program that supports great projects in art, science and technology. As the selected company this year, Beama is being provided with budget of $50,000 for materials and artist fees to help develop the ship, with funding coming from the Remarkable Experience Accelerator, a joint initiative of Calgary Arts Development and the Calgary Hotel Association.

(This is the first year for this three-year development program; the next call for proposals to the Big Bang Residency Program will be issued later this summer.)

“When you step inside the ship, you become a part of an experiment. You have to coordinate with other crew members to create a coherent communication. There are a lot of interesting dimensions, which will be developed through the residency at The Banff Centre, culminating in a spectacle!” described Mary Anne Moser, president and co-founder of Beakerhead, the annual festival that mashes up art, science, music and entertainment where the Bass Ship will debut. Last year, the event attracted an audience of 112,000 last year.

Beama Visual does some amazing mash-ups itself, with creative video mapping and custom anaglyph 3D animations set to live music and sound effects, and they have done so for many major international music festivals and entertainment events, including having worked with Beakerhead since its inception.

“We are very excited to have been given the opportunity to develop the B.A.S.S. Device as part of the Big Bang Residency Program with the Banff Centre,” exclaimed Leigh Powless, Production Designer with Beama. “We’ve enjoyed all of our previous collaborations with the people of Beakerhead, so we when we saw the announcement of the Big Bang Residency this summer, we leapt at the opportunity to build an even crazier installation with them.”

Powless described the creation as roughly 30 by 30 feet, with a thumping 360-degree sound system, and an eye-popping light show using some of the highest definition LED panels on the market, all designed to blur the line between art and science, education and play.

The work will open on September 14, 2016, and while fun is a major goal, participants will find there’s more to light and sound than, well, just light and sound, teases Powless.

“For those curious and intrepid minds who want to explore the installation even further, we have left clues to a deeper narrative, encouraging participants to take a journey with us out into the far reaches of space. Perhaps along the way we’ll learn something not just about the greater mysteries of the universe, but also what it means to be part of humanity.”

B.A.S.S. stands for the Beama Applied Sciences Sector, Powless revealed. Part of the narrative for this project involves the founding member of Beama discovering some schematics for an alien device, and so he creates B.A.S.S. as a subdivision of the company to research and build the strange machine.

As part of the build-up to the project, the company will be releasing a short documentary about the discovery and creation of the B.A.S.S. Device. There’s a real air of interactive mystery about the storyline and the installation itself, which will just have to remain that way until the grand reveal later this year. And, because it is a ‘spaceship’ after all, there is a chance it goes ‘on tour’.

Interestingly, this is all taking place during what Calgary Mayor Naheed Nenshi has declared is the Year of Music in his city, where in 2016 a new National Music Centre is being built, the Juno Awards will be staged, and the Bass Ship will launch.

As part of the yearlong celebrations, and in anticipation of the spaceship taking shape, Beama is launching a collaboration with BassBus, One.1, and Calgary’s electronic music community. Their first night of music, art, and live performance takes place February 12th at The Legion #1. 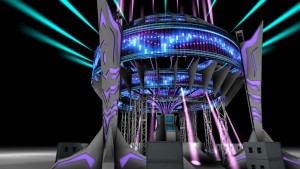 Lift-off takes place during what the Calgary Mayor Naheed Nenshi has declared is the Year of Music in his city.

Netflix’s VPN crackdown has no winners