The news is nothing but contagious when an infectious disease threatens our planet. 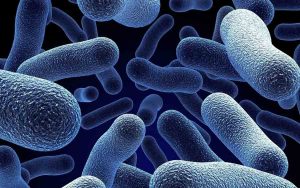 Breathless news reports about the outbreak of deadly diseases like West Nile Virus (WNV), H1N1, Salmonella or E. coli have captured our attention recently; worldwide the number of outbreaks per year has more than tripled since 1980.

International healthcare researchers have declared that we are “grossly underprepared” to fight such outbreaks, and that deadly infectious disease outbreaks will become more frequent in the coming decades.

So being able to identify serious public health threats early enough is a life-and-death matter. There is a need for a new kind of surveillance, one that uses new technologies along with data gathering and analysis techniques to assess the emerging risks and identify appropriate responses.

Researchers in this country are leading the way with advances in epidemic modelling capabilities; innovative made-in-Canada technologies are now available to quickly identify the molecules, pathogens and symptoms of infectious disease activity.

IBM and Vancouver-based technology company Fusion Genomics are working together to detect pandemics well before they happen. 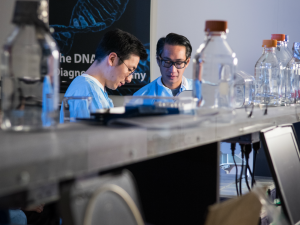 Fusion Genomics has developed disruptive DNA and RNA technology that it believes can positively identify infectious diseases and enhance the surveillance of emerging pathogens like MERS, SARS, avian flu, and swine flu. Photo courtesy of IBM

Once identified, a doctor can begin appropriate treatment. The disease testing process takes about 24 hours right now, but the developers at Fusion expect that time to be down to about eight hours after final testing and deployment of their platform.

The computing speed and scalability that Fusion needs to identify global threats is driven by the cloud, and IBM has been selected as Fusion’s partner in creating a coordinated data analysis and delivery system that can scale up or down as needed.

Fusion offers a complete testing kit, called ONETest, to identify the genetic signatures of all known pathogens, in combination with its FUSIONCloud data analysis platform (currently being tested in Canada and the European Union).

The test kit comes with a patient prep kit, and small genetic samples are extracted (blood, nasal washes, sputum, and biopsies, in addition to environmental sources like mud and air, can be tested), separated from the patient’s normal cells, and then the genes are identified in a sequencing (NGS) machine, the results of which are uploaded to the IBM Cloud.

The IBM Cloud enables Fusion Genomics’ machine learning algorithms to identify the presence of a pathogen, including any forms that could cause public harm.  The efficacy of any treatment can also be determined while tracking the transmission dynamics of the pathogen.

Of course, because the genomic testing and analysis is delivered via the IBM Cloud, Fusion says it can easily run analytics and share information across international boundaries.

Fusion chose IBM because of its ability to rapidly scale up or down while guaranteeing protection of sensitive genetic data, saying it depends on a “security minded end-to-end system for health data standards and systems.” But before genetic material ends up in the hands of a third party company, privacy and security analysts say, informed consent and a strong auditing trail must be in place.

Fusion Genomics makes an appearance at a healthcare product trade show, Options IX for the Control of Influenza, in Chicago in August 2016, where it first showcased its ONETest Influenza Sentinel kit and the Fusion Cloud.

“With a quickly growing global population, potential outbreaks of infectious diseases pose an increasingly pressing threat to our public health”, said Mohammad Qadir, CEO of Fusion Genomics.  “We chose IBM over other cloud providers because of its ability to quickly scale up or down while ensuring that sensitive data is protected with one of the most secure clouds available. This accelerates our capacity to react to infectious diseases that can pose dangerous threats to both the economy and human life.”

Not only can Fusion’s machine learning software compare genetic material to that of all known pathogens, it can analyze and produce results about the linkage of new or novel infections to human factors like population density, travel and trade, as well as ecological factors like climate change and agricultural practices.

If there is a risk, Fusion can help groups like governments and hospitals make rapid and informed decisions for the health and safety of those that rely on them before an outbreak occurs.

Fusion has finished a million-dollar financing round, with additional funding planned with a target over $10 million. Fusion was one of several new companies to receive support from VentureLabs, a business accelerator program delivered by Simon Fraser University (SFU), the University of Victoria (UVic), the British Columbia Institute of Technology (BCIT) and the Emily Carr University of Art + Design (ECUA+D), in partnership with the BC Innovation Council (BCIC), government and industry partners.

Organizations around the world are working with Fusion to access their genetic technology system built on IBM Cloud, including government agencies in both Canada and the European Union.

The results, once in, are slated to go, well, viral.

Manage data use on smartphones to avoid dreaded overages