We have no problem using energy. And we do have options for capturing and generating power.

The stumbling block has been storage.

But advances in lithium-ion battery storage technology, in part driven by research conducted here in Canada, prove that batteries can be integrated into our existing power systems to both store energy and stabilize entire electrical grids. 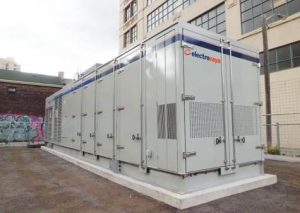 The Electrovaya Battery Energy Storage Systems Project uses a 4 x 3 x 14 metre container with some 5,000 individual Li-ion battery cells (150 kW total capacity) inside. Once tested and validated, the completed BESS was set-up on the campus of Ryerson University, connected to the grid, and used to store off-peak power and provide high-quality power on demand.

In downtown Toronto, giant tractor-trailer-sized battery banks known as Bessies, or battery energy storage systems, are part of multi-million dollar developments that show batteries are now cheap, safe and reliable enough to take on the challenge. 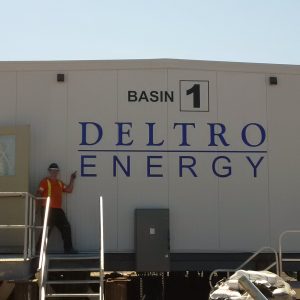 Built by the Ontario company Deltro Energy Inc., one project – dubbed Basin 1 and 2 – uses two giant tractor-trailer units to hold thousands of individual Li-ion batteries, which when tethered together can store and then make available multiple megawatts of power. Deltro Twitter image.

Built by the Ontario company Deltro Energy Inc., one project – dubbed Basin 1 and 2 – uses two giant tractor-trailer units to hold thousands of individual Li-ion batteries, which when tethered together can store and then make available multiple megawatts of power.

This spring, those ‘basin bessies’ will be plugged into the province’s overall energy system, contributing to the power storage, management and shifting capabilities that the marketplace requires.

Power shifting is a valuable technique that allows users (large industrial companies and independent electrical operators, for example) to store power obtained when it is cheaply produced, and then use it at times when electricity is most costly. 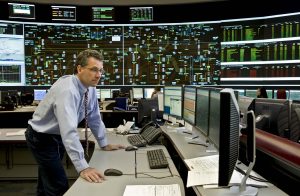 It’s a way for power authorities like Toronto Hydro to create and manage even more effective price-and-usage strategies in order to reduce peak demand and level-off power generating requirements.

Deltro says the giant batteries are also used to keep the electrical power at 60 Hz, the North American standard, in order to prevent brown-outs and power spikes should demand fluctuate.

The fact that Li-ion batteries have such capabilities at all is due in part to the work of Jeff Dahn, a professor and researcher at Dalhousie University in Nova Scotia. Known as one of the world’s leading lithium-ion innovators, he was just presented with a prestigious Gerhard Herzberg Canada Gold Medal for Science and Engineering. 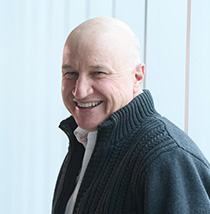 The work at the Dahn Lab (just 25 staffers in a 5,000 square foot space) at Dalhousie affects all aspects of lithium-ion battery research.

In fact, Elon Musk and his electric-vehicle and grid energy-storage company Tesla, along with Dalhousie and Canada’s Natural Sciences and Engineering Research Council (NSERC), have formed the NSERC/Tesla Canada Industrial Research Chair, which Dahn heads up, in order to support the wider adoption of batteries in electric vehicles and renewable energy systems.

Meanwhile, Deltro’s Basin 1 and 2 are just about ready for commercial use; each system’s collection of individual solid state lithium-ion batteries (containing 720 individual batteries for six megawatt hours each) will be connected to Toronto Hydro’s Basin substation, supplying six MWH and two MW each.

Not only does the project help manage energy, it is protecting land, too. The tractor-trailers sit on land in Toronto’s Port Lands area that really has few other options for use, because of the relatively poor environmental conditions found on the property. But, for other environmental reasons connected to the nearby Don River system, the battery system construction has to withstand any future storm event, including possible flooding.

Yes, those lithium-ion batteries we use (with some challenges still, it must be said) in our mobile devices and power tools are improving dramatically, and now Li-ions can be used to power a car over long distances and even power up the local neighbourhood. 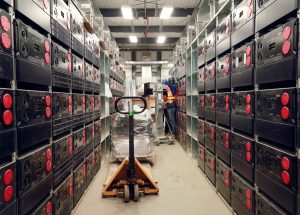 New energy storage systems like the Basin 1 and 2 project are made up of a collection of individual solid state lithium-ion batteries. Image courtesy Deltro Electric.

How Apple, Microsoft, and Samsung push ecosystems in retail stores