Mobile phones and tablets, wearables and other digital devices are convenient, entertaining possibly even rewarding for many people. For folks facing accessibility challenges, they can be life-saving.

For businesses looking to attract and serve even more customers – hands up if you are NOT in that category – accessibility open the doors of your business to a growing segment of the population.

Over the next dozen years or so, people with disabilities will spend at a rate expected to be three times that of the overall population. They will represent nearly a quarter of the total consumer market – and spend well over $300 billion every year, according to a report from the Conference Board of Canada called The Business Case to Build Physically Accessible Environments.

More than 500,000 Canadians have visibility challenges, for example, and living with sight loss can severely restrict the access they have to commercial establishments and physical storefronts.

More tellingly of course, sight loss brings loss of independence and information in almost any setting; just finding a crosswalk button to trigger the lights and safely get across the street can be a real challenge.

So, among the many initiatives undertaken by the Canadian National Institute for the Blind (CNIB), the roll-out of innovative and assistive technologies designed to make public spaces more inclusive and accessible.

The CNIB has partnered with the developers at BlindSquare in a project called ShopTalk to set-up and install accessibility systems that give people who are blind or partially sighted extra support to move about more freely in their communities using their iPhone. 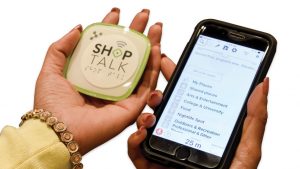 Using Bluetooth, the beacons communicate with an iOS device loaded with the BlindSquare app.

The assistive technology platform uses small palm-sized GPS beacons and QR code labels placed in and around a store, a campus, a neighbourhood. Using Bluetooth, the beacons communicate with an iOS device loaded with the BlindSquare app. Then, by cross-referencing its location with an open mapping system, look-up database and pre-set information about the location’s layout or floor plan, the app can provide users with valuable information about the place they’re in or about to enter. 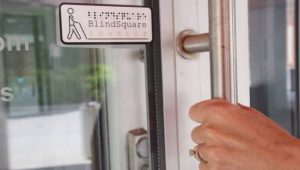 On the campus of universities like the U of Guelph, BlindSquare-enabled navigation and wayfinding systems are being installed. University of Guelph photo.

A built-invoice synthesizer will speak to the user about the location (up to a roughly 200 metre radius) and describe the environment in one of a number of user-selected languages. The app has other features, including favourites  to save special locations for future look-up, and a filter function so that app only announces the necessary or familiar streets, for example, and doesn’t overwhelm the user with unnecessary information. A simple shake of the smartphone tells the app to note and store current location.

At a demonstration of the BlindSquare system (and many other smart-city targetted devices and technologies) conducted by Sidewalk Toronto at its new 307 tech demo space on the city’s waterfront, sighted and non-sighted visitors could see the set-up, download the app, and test out the system in situ.

(Sidewalk Toronto, of course, is a joint effort by Waterfront Toronto and Google/Alphabet’s Sidewalk Labs to create a completely techno-enabled smart community on Toronto’s Eastern Waterfront, beginning with the creation of Quayside. As part of its publicity and awareness campaign, 307 will be open to the public every weekend and it will host a monthly series of events for people of all ages and abilities to see new technologies, prototypes and other information presentations.)

CNIB installed and programmed the palm-sized navigational beacons and QR barcodes that delivered spoken descriptions of the layout of the building to app users. Accessibility technology demonstrations like this one are helping Sidewalk Toronto designers test how they can create public spaces that are easily navigable for everyone.

“Technology is a game-changer for people with sight loss and barrier-smashing technologies, like beacons and BlindSquare, are helping transform built environments to create a more inclusive world,” said Angela Bonfanti, Vice President Foundation (Ontario & Quebec) CNIB. “By installing beacons in their experimental building, Sidewalk Toronto is helping CNIB unleash the power of technology for blind and partially sighted Canadians.”

Even more than experimental set-ups, BlindSquare is in action at one of the city’s busiest intersections and communities: around Yonge and St. Clair , some 150 beacons have been installed in the past few months as part of the CNIB’s ShopTalk: BlindSquare Enabled project, with more to come. Working with the mobility and accessibility  advocacy group The Rick Hansen Foundation, and supported by the Government of Canada, local businesses have been made more accessible to folks who are blind or partially sighted.

“The ShopTalk program aims to make Yonge and St. Clair the most accessible neighbourhood in Canada, improving access for individuals who are blind or partially sighted,” Kat Clarke, Lead, Advocacy (GTA) and Specialist, Government Relations (Ontario) at CNIB, said in an announcement. “With the support of local businesses, such as TD Bank Group, people who live and work in the area will be able to experience first-hand the value this type of technology can bring to the neighbourhood.”

Among the popular retail outlets in the program are the TD Bank, Pet Valu, Shoppers Drug Mart and Swiss Chalet, as well as important public services like the TTC. The local CNIB Community Hub, another new member of the community, is also hooked up, and is providing services to both sighted and non-sighted clientele. 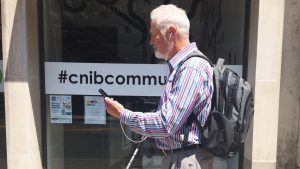 A local CNIB Community Hub, near Yonge and St. Clair in Toronto, is providing services to both sighted and non-sighted clientele. CNIB image.

At the Hub, staff report, the number of visitors who are blind or have low vision has gone up since the beacons were installed. Some 200 people visit the Hub each month, and it has a total of some 30,000 clients in the Greater Toronto Area. 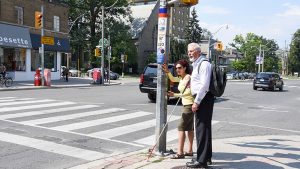 The ShopTalk program aims to make Yonge and St. Clair the most accessible neighbourhood in Canada, say program sponsors and coordinators. CNIB image.

App Contest to Drive Innovation in the Legal Profession