Have you ever heard of blue light blocking glasses?

A few months into virtual learning, a friend of mine sent me a link for a pair she bought for her two 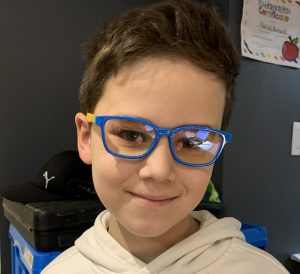 daughters and I was intrigued. The idea is that they help reduce strain on the eyes when staring at a screen for hours a day. And now that kids are doing just that both for school and to interact remotely with friends and extended family, it seemed like a good idea. But blue light blocking glasses aren’t just for kids: it’s big business for adults, too. So, I wondered, do they really work?

What are Blue Light Blocking Glasses? 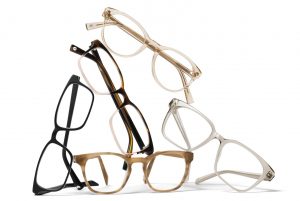 Blue light glasses are designed to look just like regular eyeglasses, except their purpose is to block out harmful blue rays of light that can emit from electronic devices like computers, smartphones, and tablets.

The idea is that they reduce the reflection of light entering the eye, essentially acting as a filter. Blue light glasses feature an anti-glare coating on the lenses that will prevent reflections based on the lighting condition.

Some sources claim that overexposure to blue light can cause afflictions like dry eyes, eye strain, disruptions to sleep cycles, and even lead to macular degeneration.

But many experts say that this is completely false, and that while spending too much time on the computer can indeed cause eye strain, it has nothing to do with blue light. What’s more, naysayers suggest that simply putting the electronic device down or looking away for at least 20 seconds can solve the issue, as can putting the device in night mode or decreasing screen brightness. They suggest that claims about potential macular degeneration are completely baseless.

The College of Optometrists in the U.K. does not suggest the use of blue light blocking glasses, even going so far as to say that “the best scientific evidence currently available does not support the use of blue-blocking spectacle lenses in the general population to improve visual performance, alleviate the symptoms of eye fatigue or visual discomfort, improve sleep quality, or conserve macula health.” The American Academy of Ophthalmology (AAO) agrees.

Image courtesy of Kitsada at FreeDigitalPhotos.net

But that hasn’t stopped the many companies making blue light blocking glasses, ranging from known designer brands like Ray-Ban and Tom Ford to no-name brands you can find for $10 on Amazon.ca, from touting the purported benefits of the product. Even eyeglass experts like Warby Parker sell them, with carefully worded copy that says they “may help” with eye fatigue, noting that they filter out more blue light than standard polycarbonate or high-index lenses, and calling them perfect for “screen-heavy days.”  Reputable news outlets like Forbes are in on the fun, too, publishing lists of the best blue light glasses. That one carefully includes quotes from medical experts that point out there isn’t a lot of research to support the use of blue light blocking glasses, but admit that they might provide improvements in “subjective comfort.”

Keep in mind that the category is relatively new so it’s possible the benefits have not yet been fully realized. According to an WebMD article, there are opticians like Georgia’s Greg Rogers who says he has seen a difference with his customers who spend a lot of time in front of screens. The Vision Council says that specialized glasses are “one tactic” that “might cut eyestrain.” Maybe it’s just too early for us to know for sure.

Whether they work scientifically or not, people are buying blue light blocking glasses and claim that wearing them helps alleviate eye strain. Do these people just feel better by wearing them? Maybe it’s even a psychological justification for enjoying more screen time. Parents of children doing distance learning already feel guilty enough as it is about letting their kids have more screen time after school to play games with their friends, and feel even more guilt if they say no.

What Are The Alternatives?

If you’re skeptical about blue light blocking glasses, but you also do want a solution to necessary increased screen time, whether it’s for yourself for work or for your kids for school, there are other things you can do to help prevent eye strain.

The AAO recommends sitting at least an arm’s length away from the computer screen and positioning it so you’re looking slightly down. You can also buy a matte screen filter to place over your screen. These are usually markered as privacy screens, but they have the added benefit of blocking out blue light.

AAO also says to take breaks every 20 minutes. Even if you don’t get out of your seat (though you really should for your overall health and well-being, and to stretch your legs), look at an object at least 20 feet away for at least 20 seconds to let your eyes adjust.

If your eyes feel dry, use artificial tears to moisten them. Increase the contrast on your screen and adjust the lighting in the room. And if you wear contact lenses, switch it up and wear your prescription eyeglasses from time to time.

Should You Get Blue Light Blocking Glasses?

There’s no scientific evidence that blue light blocking glasses actually work or are even necessary. Employing any or all of the strategies noted above might accomplish the same thing.

But if you see a killer deal on a pair of blue light blocking glasses, it also can’t hurt to try them out. While they might do nothing for you on a biological level, they might make you feel better mentally. And that could be just as important for your peace-of-mind and mental health.

A writer for Good Housekeeping tried out a pair of blue light glasses knowing full well that they aren’t scientifically backed, and discovered some peripheral benefits. Wearing them made her more aware of her screen time, for one. Second, she found that they encouraged her to adopt other habits to help reduce eye strain, like putting her phone into night mode at 9 p.m. and upgrading her home to smart bulbs so she could adjust the intensity and warmth of the lighting and put less strain on her eyes.

Bottom line: even if blue light blocking glasses don’t accomplish the promise of reducing harmful rays from reaching your eyes, and end up being nothing more than decorative eyewear, wearing them can’t hurt. No harm, no foul, as they say. But that’s only for a cheap pair. If you see a pair selling for hundreds of dollars, unless you like and want them for the style, don’t believe the hype. Just as with your computer screen, take a step back and look the other way.

Predictions for Data Privacy in 2021 – Own it. Respect it. Or Legislate it.