A new kind of roadmap is being developed in Canada to accelerate the deployment of Autonomous Vehicles (AVs).

Canadian technology and geospatial data company Ecopia AI is using its proprietary artificial intelligence-powered systems to create high-definition (HD) maps, such as this one of Waterloo, Ontario.

Canadian technology and geospatial data company Ecopia AI is using its proprietary artificial intelligence-powered systems to create a high-definition (HD) map for the City of Toronto, much as it has done for other government and commercial applications around the world.

This new kind of map has to represent its area of coverage in unprecedented detail in order to accommodate the navigation needs of self-driving autonomous vehicles, among other uses.

HD maps are a kind of digital representation of reality, and with their ability to resolve images at almost a one-centimetre scale, they are being embedded into important decision-making applications used in smart city building, highway design, urban planning, and AV navigation.

HD maps are also a kind of living database, interfacing as they can with various sources of data, such as the autonomous vehicles they are designed to serve.

Think of the speed limit on a road, think of the speed at which traffic is actually travelling on that road, and think of the data sensors embedded into many vehicles, autonomous or not, on that road. Road travel profiles could be updated in near real-time according to the data received. The map itself becomes a kind of sensor, one that operates on a much larger geographic scale than any single data source. And those sources could be in a vehicle, they could be in the highway itself. They may be embedded in street lamps, traffic lights, buildings, and other structures. Any sensor that provides some kind of physical, geospatial, photographic, or contextual data can help inform this new world of digital cartography.

HD maps are also layered so that users can access specific data references and applications. Cloud computing and processing can be a big part of HD map-making, too, with all that data being collected.

Therefore, HD maps can deliver great insights, not just directions. Ecopia’s HD Map of Canada’s largest city will serve as a test-bed for AV applications and the development of other next-generation transportation systems. 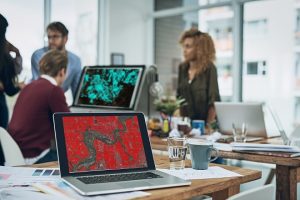 To serve this need, Ecopia is commercializing a centralized hub for the HD Map data needed in the enablement of AV and smart city applications. The embedded HD Maps will be generated through the use of Ecopia’s AI systems, which mine geospatial data such as aerial and street-view imagery, to generate a highly detailed digital representation of the physical world. The HD maps will include detailed road networks, pedestrian networks, and other land cover features such as 3-D buildings – all of which will be available for license through the platform and a series of application programming interfaces (APIs), the company describes.

So not only is the City of Toronto looking forward to the maps, so too, the Ontario Autonomous Vehicle Innovation Network (AVIN), which helped support their development. Through AVIN, Ecopia received $994,706 from the Government of Ontario to match an industry contribution of $2,039,561 to develop the technology related to this initiative in partnership with the City of Toronto.

AVIN is an initiative of the provincial government, led by the Ontario Centre of Innovation. It provides research and development support, talent development, technology acceleration, business and technical supports, and demonstration grounds for the autotech sector. Ontario’s 2021 Budget announced further support for the sector by investing $56.4 million over the next four years to build on the successful elements of AVIN and create the Ontario Vehicle Innovation Network (OVIN).

“Ecopia is excited to support the growth and development of autonomous vehicle and smart city applications through our HD Map platform,” said Jon Lipinski, Ecopia’s Co-Founder and President. “We’re thankful to the Ontario Government, AVIN, and the City of Toronto for their partnership in this endeavour – which has far-reaching implications not only for the city and province but across all of Canada as we look towards the future of transportation.”

The mapping project itself has a two-year term but Ecopia says it expects some initial results before the end of 2022. As mentioned, the company plans to incorporate the Toronto HD Map data into a “centralized hub” for map data. It will be available for license through an online platform as well as a series of APIs (application programming interfaces).

Evangelists for autonomous vehicles say the technology has the potential to make transportation more efficient, safe, and environmentally friendly. With that goal in mind, we can surely use some detailed maps to help us get there. 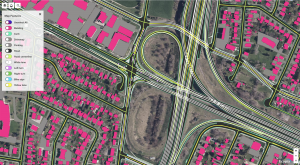 Ecopia AI has also mapped the Waterloo region to boost autonomous vehicle deployment, in partnership with Communitech, the University of Waterloo’s Waterloo Centre for Automotive Research (aka WatCAR), and Waterloo Region Economic Development Corporation (aka Waterloo EDC). All are the key partners in the area’s Regional Technology Development Site, which focuses on high definition HD mapping and localization for Ontario’s Autonomous Vehicle Innovation Network (AVIN). The official website for this project, which these images illustrate, was just launched recently, called Open HD Maps.