Nowadays, everyone either owns an activity/fitness tracker or smartwatch, or they are interested in getting one. But with so much choice, it’s difficult to decide what to get. One of the most common inquiries I receive from friends and family is trying to decide between X and Y brands of a fitness tracker.

To help on the journey, here’s a handy checklist of the key questions you should ask yourself to help narrow down the choices.

Why do you want one? 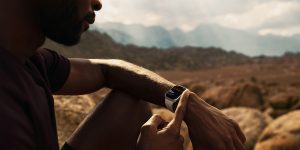 The most important question to ask before starting the search is why you want such a device. Is it mainly for tracking fitness or sports activities? To keep on top of schedules from your wrist? Or to keep daily tabs on your steps, calories burned, and activity levels? Most smartwatches and fitness trackers can do all three, but some focus more on one than the other. For example, if phone notifications are critical but you also want to track walks, cycles, and workouts, a smartwatch like the Apple Watch might make sense. 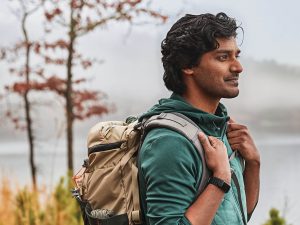 Conversely, if you’re looking to track daily workouts but would love to be able to see who’s calling or text messages and calendar updates, too, without the need for apps and other stuff, a fitness tracker like the Fitbit Charge 5 might be better suited.

What design do you want? 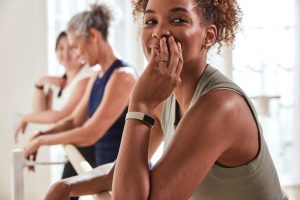 Some people want to track daily steps, workouts, and more but don’t want something big on their wrist. In fact, they might even want to wear it with a wristwatch, too. In these such cases, something fashionable and thin makes sense, like the Fitbit Luxe or Inspire 2. These are fitness bands that might only have a tiny screen, or maybe even no screen at all, so you could wear them on one wrist with a watch on the other and not feel odd. However, if you want something that will replace a wristwatch, look for a smartwatch or an activity tracker with a big, bright, high-resolution screen that you can customize to display the information most important you on the home screen.

The Maison Kitsune edition of the Samsung Galaxy Watch4 might be an interesting option to become a primary and stylish designer wristwatch, smartwatch, and fitness 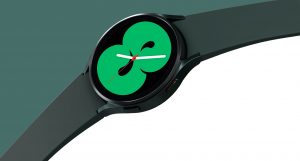 tracker. There are also designer brands to consider that run on Google’s wearOS, for example, like the Fossil Gen5 smartwatch. These are just as much wristwatches as they are smart devices.

Are you into one specific sport?

If you’re into a specific sport, like running, you might want to consider a device that goes over and above for that activity. Garmin, for example, has specific devices designed for runners in its Forerunner line. They provide additional useful data you won’t get with other smartwatches or trackers, like tracking pace along with distance, speed, and routes, recovery time guidance, and even race time predictions. The new Apple Watch Series 7 might be a worthwhile investment for cyclers with its special cycling features, including being able to automatically detect once you begin pedaling and deliver progress data through connected Bluetooth headphones so you don’t need to glance over at your wrist while paying attention to the road or trail. Smartwatches like the Polar Grit X Pro are designed for adventurers with military-grade durability, extended water resistance, and the ability to handle extreme temperatures.

What additional features are important?

Many premium activity trackers and smartwatches today come with a wealth of additional features, including Sp02 measurements, 24/7 heart rate tracking, notifications, and ECG, detailed sleep tracking and sleep scores, readiness scores, and even temperature sensors. If you want to keep on top of heart health, for example, look for a model that has not only 24/7 heart rate tracking but can also send notification if it detects unusually high or low rhythms, and that lets you take an ECG test. Stress monitoring, breathing exercises, and mindfulness activities might be a priority if you’re looking to work on mental health as well. Some trackers also have storage for music so you can listen offline, or let you stream directly from the device to a pair of Bluetooth headphones via cellular connection. Some have built-in GPS so you can leave the phone at home and still track a route while others use connected GPS which requires that the phone stays with you for accurate readings. Prioritize these added features, then find a device that includes the ones that are most important to you.

How often do you have to charge it?

Battery life can be a deal breaker for some who don’t want to have to remove their smartwatch or activity tracker and charge it daily. While the new Apple Watch Series 7, for example, still only has an 18-hour battery life, it does charge more quickly. But there are other trackers and smartwatches that can last for up to a week before they need to be recharged (usually with GPS off). Some of the less sophisticated ones use coin-cell batteries, the same ones used in digital wristwatches, so you only need to replace the battery every year or so. The Withings Move, for example, has a battery that lasts for up to 18 months, though it only provides limited activity and sleep tracking. But that might be all you need.

With that said, most people sit for at least an hour a day, whether it’s to work, drive, or watch some TV, which is the perfect time to pop a tracker on the charger to get a full battery refuel. Nonetheless, make sure the battery life fits with your lifestyle.

What phone do you have?

The phone you own might be a deciding factor in which activity tracker you choose. Most activity trackers and smartwatches work with the most popular phone types, including Android and iPhone. But the Apple Watch, for example, only works with the iPhone while you’ll get the best, most seamless experience with a Samsung Galaxy smartwatch when using it with a Samsung Galaxy smartphone. Check compatibility as well as extra features you might be able to leverage. With some Fitbit devices, for example, you can use Quick Replies with Android devices for replying to messages instantly from the wrist, which is an added advantage for Android users.

more articles on health and fitness