Facebook recently announced a number of important changes. These include Subscribe Button, News Feed Ticker, Smart Lists, the revamped Newsfeed …. and the major announcement: Timeline. The announcements were made at Facebook’s F8 Developer Conference in San Francisco in September. I had the chance to see Mark Zuckerberg  speak at the  conference.

Here’s my take on some of these changes. I’ve had a chance to try Timeline myself, so read on!

Facebook now allows you to make your personal profile more public. You can now allow allow others –friends or not– to subscribe to your public update.  I spoke about this to a few friends. This is more conducive to celebrities, pundits, journalists, etc who want to build their visibility but don’t necessarily want to friend strangers. It’s akin to subscribing to an RSS feed, but within Facebook, you as the subscriber remain faceless. This sounds more like a Twitter follow. Does anyone see this as counterintuitive to community?  In addition, what will this do to the newsfeed. Currently, Facebook algorithm allows newsfeeds from people whom you’ve recently interacted with.  My assumption is this is negated once you activate the subscribe button. The content you’ve subscribed to will show up regardless and may push your friend’s content further down the feed. Below you’ll see top subscribed including Sheryl Sandberg, Bill Simmons and Jessica Alba. My point is made. 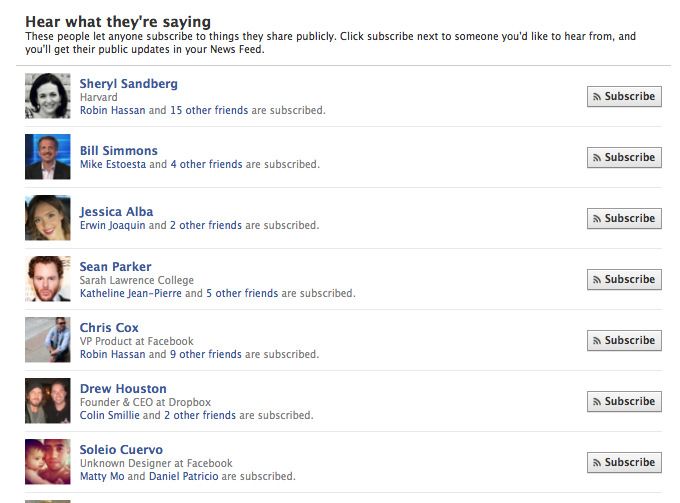 News Feed Ticker shows all the actions performed by your friends, your Facebook Pages and your subscriptions. The real-time News Ticker pretty much shows what’s happening on your Facebook right now. It looks like this contradicts my earlier comment about Facebook algorithm allowing newsfeeds from people whom you’ve recently interacted with ie the relevance seems to be disregarded. So do I really care if someone that I haven’t spoken to in years, suddenly shows up on my news feed ticker LIKING a Farmville app? I don’t think so. Another point, a friend of mine, Claire brought up:  Now your boss knows every little thing you do on Facebook once they have a ticker that monitors every action. I say #fail on this point. 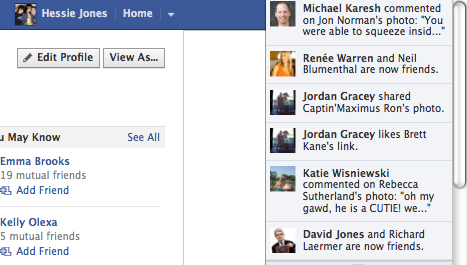 Facebook Lists is Facebook’s answer to Google Plus Circles. You can essentially create and use different lists to follow or track posts by designated friends, people and groups. Facebook will create the following lists for you: Acquaintances, Friends, Work, School, Family and Your City. This is expected but is a little too late especially for the teens on Facebook who forever wanted to select who they post what content to aka Mommy voyeur. This is the reason for the mass teen exodus from Facebook in the last year.

This is a minor upgrade to the News Feed that exists today and as such it might not be as relevant as the others. Top Stories and Recent Stories have now replaced Top News and Most Recent news. Top Stories are news snippets that Facebook thinks might be of interest to you, whereas Recent Stories is the chronological feed of your news. You, as a user can see a ‘blue’ triangle above each feed and mark it as a top story. Top stories have traditionally been those that had the most engagement. Now, with the addition of the triangle, users can directly vote up their favourites.

This is the most significant change to Facebook. In Zuckerberg’s words, Timeline allows you to tell “the story of your life.”  “All your stories, all your apps, a new way to express who you are”.

As you go back in your Facebook history, the Timeline will summarize some of the highlights from that year to “tell the whole story of your life on a single page. What I do like is that Facebook has now taken all that data and presents it in Timeline, allowing you to scroll back through time. This replaces the nauseating click on “older posts” that only brough you to the previous activity. Remember what you had posted when you first joined Facebook back in the day?

Here’s what I learned from my first crack at Timeline. Thanks Brad for sending me the link if you want to turn your profile over to timeline.  Considering I’m not an frequent user of Facebook, my timeline turned out OK. I must admit it looks very cool: it took all my recent activity: Wall posts, subscribes, Likes, open conversations and revealed a nice scrapbook that was all about me. My friend reminded me of Intel’s version of the Museum of Me. This is exactly that. 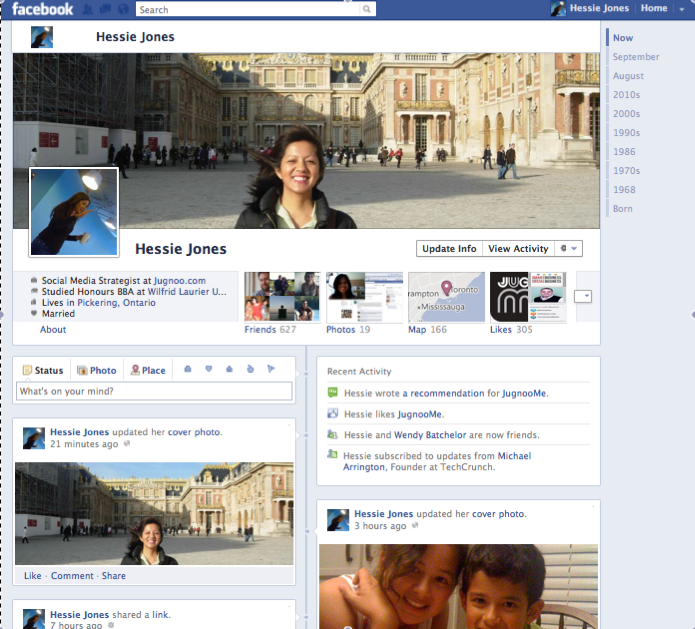 Apps in your Timeline

Facebook recently opened up its platform to applications. These apps will allow Facebook users to enter almost everything they do into the social network – what they cooked for dinner, what book they’re reading and what page they’re on or what bike trail they just biked.

So…. LIKE is no longer the “it” verb.  Now Facebook allows you to “Read”, “Cook”, “Watch” and also allow users to click on this apps directly on your newsfeed as a “frictionless” or seamless opt-in. For example, Through streaming music services like Spotify, you can update your friends with each song being sent through their earphones. This update will quickly pass through the News feed Ticker on Facebook.

I like this idea, although there is still a barrier for Canadians who don’t have access to Hulu or Spotify because of CRTC rules.

The idea of de-prioritizing LIKE is a hindrance for brands. But for the user, this elevates the power of friend recommendation and if the brands have strong advocacy, they can easily capitalize on this new change.

I can’t wait to use this feature on Facebook. If you want to see it in detail, please go here: Timeline.

iPhone 4S – the start of something big?