Among the top complaints voiced by tablet users about their devices – more than battery life, connectivity, not enough apps, too many tablets – is trying to type.

Nearly a half of the tablet users surveyed said trying to type large documents was the biggest irritation – and they thought a large doc was like 500 words! Could be why the great Canadian novel has yet to be created on a portable device. 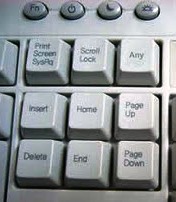 Hitting the any key requires a new tablet solution

There are touch screen-based software typing solutions out there, but screen size and physical feedback are still shortcomings.

Regardless of how well — or not — you type, most people say the best and most practical solution for tablet typing is a physical and familiar QWERTY-like, on-device keyboard.

That’s a similar finding to one that Gadjo related in his recent article here at WhatsYourTech.ca on typing with smartphones – touchscreen-based devices are fine for SMS messages and short e-mails. But for those who do a lot of typing, physical keyboards are the way to go. 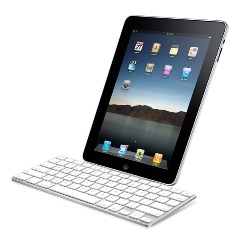 Apple was wise to this early on, with its fine dockable wireless keyboard for iOS devices.

Companies like Logitech and Verbatim have their own wireless tablet keyboards now, for multiple platforms including iOS and Android. Many have multiple features, too.  They serve as adjustable device stands, and they also feature double duty keys for typing numbers, and then controlling media playback.

Dockable keyboards for tablet devices are more dedicated in their functionality, like Asus and its Eee Pad Transformer optional docking keyboard, but they can be a little bulky when using or transporting.

Folding keyboards are one way to reduce the overall size of a portable keyboard, but even smaller keyboards are available, specifically designed for text entry – if not portability. 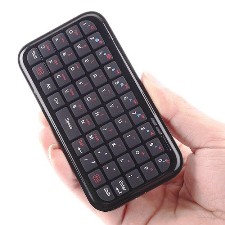 Some portable keyboards, like the iTiny, are as small as a smartphone.

Like the iTiny Bluetooth Keyboard which is just five by two inches, but nevertheless has a full QWERTY keyboard, numerical row of keys and its own space bar.

Small and light is certainly a consideration for typists on the go, but some products are too much of a good thing.

The iLuv portable Bluetooth keyboard, for example, is really light and thin, but it feels almost like a plastic toy as a result. For larger hands, the keyboard is cramped, and so the results are often not good.

So none of these text entry devices will make you a better typist.

That’s where Adaptxt comes in. 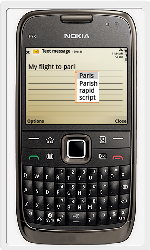 It’s Open Source software, and the development community has come up with some smart and sophisticated algorithms and programming tools to deliver very accurate and contextual word predictions, error corrections and many other powerful text features.

It can actually learn an individual user’s communication style, and so provides a personalized alternative to the default text input experience with physical QWERTY and 12-key keypads.

Adaptxt works with some 50-plus languages, and pretty much any connected device, from smartphones to home TVs.

But there’s another alternative to typing – swiping!

Swype is a cool new software (beta trials are underway) system for fast text entry on portable touch screens of any size.

No more keyboards – Swipe is all about typing with gestures in the air!

Well, it will be – right now, though, you can ‘create’ a word by drawing across its letters. Put your finger on the first letter of a word, and draw a path from one letter to another – only lifting your finger from the screen after the last letter.

Swipe is driven by powerful algorithms, word data bases and advanced completion engines, and it will recognize the words you are drawing – and even put in spaces where necessary. 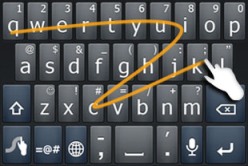 Swiping, not typing, may be the future of text entry.

It’s already being built into some devices, like ViewSonic’s new Android-based tablet, and should be available as a stand-alone package once the beta test is complete.

Swiping may still not protect you against typographic error, but it could be the tool to fight the newest threat to personal data: text theft, and keystroke spies!

Yes, there’s yet another risk involved in using a smartphone – a mobile phone’s built-in accelerometer can be used to read keystrokes from another keyboard at a distance!

The sensors do not recognize the vibe of an individual key, but they can sense whether, for example, vibrations from a keystroke came from the right or the left hand side of the keyboard – yes, the sensors are that sensitive and discriminating.

The gathered data can then be fed into a word recognition program, and presto, a new portable surveillance tool.

No word on spell check features.

5 Smartphone features worth looking out for