A scientific panel set to review Wi-Fi health and safety concerns has been wracked by resignations and allegations of conflict of interest.

A second member of the panel chosen by the Royal Society of Canada to look at human exposure to radiation and required safety levels around wireless devices, cell phones and cell towers has ties to the industry and should resign, says a citizen’s advocacy group based in Canada.

According to the group, called C4ST or Canadians for Safe Technology, John Moulder, professor and director of radiation biology at the Medical College of Wisconsin, in Milwaukee, has close industry ties and should be removed from the review panel.

Moulder is an American industry consultant, and has served as “a professional expert witness with a pattern of denying the suspected or identified risks” of electro-magnetic radiation, says Frank Clegg, C4ST’s chairman. “He has no place influencing Canada’s safety review.”

It’s the second such charge to impact the eight-member review panel, convened to update 2009 safety guidelines for human exposure to electromagnetic emissions from wireless devices. With $100,000 in funding provided by Health Canada, the report would contribute to regulations developed by Industry Canada. 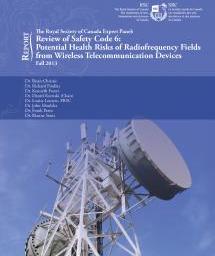 Cover of a report on Wi-Fi safety and health concerns

Earlier this year, the chair of the panel resigned, after a report appeared in the Canadian Medical Association Journal that stated Daniel Krewski did not fully disclose details of his government contracts, and that he was in a possible position of conflict of interest as a result.

According to the CMAJ, Krewski received a $126,000 contract from Industry Canada to provide “communications advice” on how to relieve Canadians’ concerns with respect to cell phone antennas in 2008-2009.

What’s more, the Merx public tender document associated with the project clearly states that this contract was to “assist in addressing what the Department believes is opposition often based on misperceptions and misinformation” to convince Canadians that Safety Code 6 is legitimate.”

(A response to e-mailed questions about the membership and activities of the Wi-Fi review panel sent to the Royal Society of Canada had not been received as of this writing).

Likewise, Moulder has reportedly rejected an interview request regarding the charges levelled by C4ST, citing confidentiality provisions in his agreement with the Royal Society.

The Royal Society of Canada convened its panel, Review of Safety Code 6: Potential Health Risks of Radiofrequency Fields from Wireless Telecommunications Devices, back in March. Panel members hail from Canada, the United States, the United Kingdom and the Netherlands.

Dr. David Carpenter, director of the Institute for Health and the Environment at the University at Albany, New York, told C4ST that he agrees the inclusion of Moulder on the panel is troubling, in part because he has taken public positions discounting “his ability to be objective or independent.”

Olle Johansson of the Department of Neuroscience at the Karolinska Institute in Stockholm, Sweden, who organized a panel on Wi-Fi safety in 2009 in Seletun, Norway, says the Royal Society of Canada should have little trouble identifying panel candidates free from conflict-of-interest concerns.

“There is quite a sufficient number of independent scientific experts without commercial ties,” he told C4ST. “These projects and reviews must be entirely independent of all types of commercial interests.”

C4ST seeks to educate and inform Canadians about possible dangers connected with the exposure to unsafe levels of radiation from widely used gadgets and technologies. 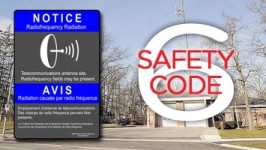 The safety code for wireless use and radiation exposure is being reviewed.

It has now released a new video that presents the results of a recent NANOS survey that highlights how Canadians perceive the radiation that comes from everyday wireless devices – and its potentially harmful health effects.

Clegg, the organization’s CEO, is the former head of Microsoft Canada.

LG impresses with G2 Android phone, but will it have the goods to take on the best?