As if you CrackBerry users needed one, there’s now another hook to the popular smart phone.

Sitting in-between a BlackBerry and a data or video projector, the new BlackBerry Presenter is a wireless device that lets you deliver PowerPoint presentations from your RIM smartphone.

You can walk about a presentation setting freely, moving some 30 feet from the devices, all the while maintaining control over basic PowerPoint presentation controls. You can navigate through a presentation, view your speaker notes, loop slides sequences and check the info from one slide while you’re projecting another. 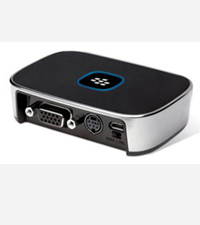 RIM even says its new gadget will work with other smartphones, as long as wireless connectivity (Bluetooth Version 2.0 + EDR, Class 1.5) and processing horsepower are adequate.

Research In Motion (RIM) introduced its BlackBerry Presenter and demo’d the device at CES last week; no specific date for availability has been announced, but the pricing has – $199 from ShopBlackBerry.com.

Eventually, it will be available at authorized dealers and retail stores.

In the meantime, of course, there are and have been similar such devices on the market for some time.

The ShowMate from Impacta, for example, is also an easily transportable (3.5″ x 2.5″ x 1″ vs. 3.4″ x 2.4″ x 0.9″ for the Presenter) way to project PowerPoint with a smartphone, including certain BlackBerry, Palm, Windows Mobile and Sony Ericsson devices. ShowMate is a wired solution, however (coming with a 10 ft cable), and its output is limited to SVGA (800×600) resolution.

Impacta has its own software for converting PowerPoint files into a more highly-compressed format, which lets you use not only a smartphone for a delivery platform, but a PC as well, with e-mail and Internet-based presentation options.

But this opens up another possible predicament. Software compatibility and full feature accessibility can be a problem with some conversions and third-party delivery platforms, so look before your leap.

So, BlackBerry users are already familiar with eOffice, a software suite that opens up Word, Excel and PowerPoint files for viewing, editing and presentation from a BlackBerry. Well, some Blackberries – eOffice is for version 5.0 of the OS; and particularly for the Bold and Tour handsets.

Even RIM’s own solution has limitations: neither the Curve 8300 nor Pearl Flip can run wit the new projection accessory, due to hardware restrictions. Other RIM devices, running BlackBerry Device Software v4.6, should be fine.

RIM does say it will have regular software updates, both for compatibility issues as well as greater support for specific PowerPoint features.

Presenter, supporting PowerPoint 2003 and 2007, will handle most of the software’s current features, including different built-in animations and slide transitions.

RIM’s Presenter also eliminates the need for pre-encoding of PowerPoint files, and its higher supported resolution makes for a prettier picture when compared to the current alternatives.

That being said, it does not eliminate the need to plan PowerPoint presentations – having spread the word about the Presenter, allow me to say a word or two about PowerPoint.

We’ve all had to sit through terribly PowerPoint shows – you know, those presentations with whirlies and swirlies and flying screens every second or two! Slides with like seventy-two lines of text, each in a different font! Screens with multi-colour bar charts that only convey subjective impressions, not factual reality!

You can blame it on Bob Gaskin, if you wish. Has a college student he and a software developer friend built the first program back in 1984 (purely coincidental, one hopes).

Funny, it was called Presenter back then, but the name apparently had to be changed due to trademark reasons.

When PowerPoint 1.0 came out, it was for the Apple Mac. But Microsoft soon bought Gaskin’s company, the Windows DOS version soon appeared, and the program was built into Office in 1990.

Some twenty years later, Microsoft says more than 30 million presentations are made somewhere in the world every day

That may or may not include David Byrne.

The former Talking Head has created the greatest PowerPoints I’ve ever seen. He’s released a book on the subject, and made a DVD using the subject. Both feature his unique and somewhat twisted sense of humour, coupled with an academic deconstruction of PowerPoint tools and techniques.

The book’s title, “Envisioning Emotional Epistemological Information”, sorta says it all, but we’ll leave the final word on the topic to this talented practitioner of ‘PowerPoint-illism’.

Joking about the Auto Content and Format Wizard in PowerPoint, Byrne is quoted as saying: “If you don’t know what to say, if you don’t have content, it’ll help you out.”