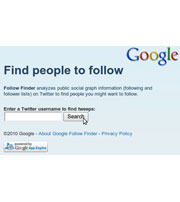 On Wednesday, Google unveiled the new and experimental Google Follow Finder on the official Google Blog. The service allows you to  type in someone’s Twitter name. The giant computers at Google labs then spin to life and generate two lists: (1.) a list of people you might like to follow based on the name you typed in, and (2.) people who have a following similar to the person who’s name you typed in.

The Google Blog summarises it well:

I’ve tried it with a few people, and it works as advertised. If you’re an avid Tweet watcher, then this is a no-brainer for you. Happy Tweeting!

The Psychology of Social Media: Women are the Teachers