So, I caught the tweet, but I didn’t really get it at first:  ‘Something is going to happen. Something wonderful!’

Yes, it’s a gentle nod to the 2001 Space Odyssey film franchise, but more specifically, it was the ‘soft preview’ of a new developer portal launched by Rogers Communications. 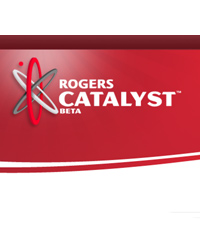 Larry Baziw sent out the tweet; he’s the Director, Next Generation Services Strategy and Voice Product Development at Rogers.

He was on about the new Rogers Catalyst beta program, and the “unprecedented access” it is giving to the community in order to enable the cost-effective, fast creation of mobile apps and services customized for the Rogers network.

There’s no charge to use the third-party developer portal, and no fee required to get online access to several of Rogers’ application programming interfaces (APIs) including SMS, location-based services and carrier billing.

“We’re removing the barriers to getting on board,” Baziw explained. “We want to make those complex telco capabilities, requirements and languages available to the developer community in their own, dot com, language.

So, the site is not only “handset-agnostic” it takes some of the very proprietary and carrier specific tech specs and exposes them to the more widely used web tools.

“A traditional dot com developer, using say Java or Microsoft .Net, would have to learn a whole new set of languages to work with the carrier infrastructure,” Baziw explained. “We’re trying to remove those barriers to getting on board, and getting to market.”

Shortening that cycle means developers can reach out to the wireless market more quickly (Rogers has more than 8.5 million wireless subscribers itself), and take advantage of a growing consumer appetite for mobile apps, one that is poised to generate revenues reaching $10 billion by the year 2015, according to data Rogers cites from a recent North American Mobile Market Report.

The Rogers Catalyst Beta program does of course hope to have newly developed apps for its network and customers, the site is not an online store.

Developers have the ability to work with the site’s tools, and get additional mileage from Rogers’ existing marketing muscle and established national channels, if desired, Baziw added.

Once they’ve registered and created a project, developers gain access to a number of SOAP and RESTful APIs so they can to build new cloud-based services and apps that run on networks like Rogers.

APIs that confirm to the Representational State Transfer (REST) software architecture for distributed hypermedia systems are known as ‘RESTful’.

ONE API Developer Hack-a-thon in Canada Image from GSMA

It can all lead to the ‘holy grail’ of mobile app development, the so-called ‘ONE API.’

That’s one, as in ‘open network enabler’, not the number.

But it is designed to address and reduce the issues surrounding device and network fragmentation out there – the thousands of different handsets (and unique tech profiles) and the many different kinds of network architecture and corporate differentiation protocols that developers often run into.

“We’re addressing that fragmentation with a standard set of open tools,” Baziw said. “It’s from the GSMA ” (a global mobile industry association, of which Rogers is a member) he said of the ONE API. “In fact, we helped launch the Canadian ONE API pilot about a year ago.”

Since that time, Baziw and his team have been to numerous industry events, developer meetings, ‘hack-a-thons’ and other activities, seeking input and perspective from the developer community.

Rogers says they’ve taken that feedback into account, and that they’re committed to working with developers and customers to bring new wireless data solutions, products and services to Canadians.

So the site is now open, it’s free of charge, and it’s expected to continue to develop over the next year.

Right now, it includes access to click through agreements, code samples, documentation, tips and tricks, a development sandbox, as well as a larger developer community and the ability to interact with Rogers Catalyst program managers.

Baziw added that, in addition to the newly-launched Rogers Catalyst program, Rogers has launched several initiatives to promote and foster innovation in Canada including the Rogers Data Alliance, a technology program designed to help machine-to-machine solutions and connected device providers bring their products and services to market quickly and easily.

For sure, that means before 3001 (the final installment in Sir Arthur C. Clarke’s Space Odyssey series)!

Are you developing cool mobile apps? Can this new site help?

Did you know what SOAP was before reading it here?

Looking into Acer’s Iconia and its dual 14” touchscreens