There’s interactive projections on the floor; cellphones, smartphones and digital pads galore; there’s even some stars that come out in the daytime!

The Design Exchange in downtown Toronto is a veritable digital feast today; it’s the host site for some of the country’s top digital awards and digital award winners.

Folks who create content and technology for the country’s digital ecosystem, including TV, mobile, gaming, online, music and more are here for two separate events that are part of nextMEDIA Toronto – there’s the 2010 Digital Hot List the 2010 Canadian New Media Awards. 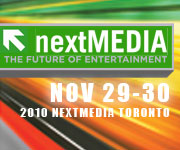 The nextMEDIA Conference is now underway in Toronto.

Nominees and finalists in the competitions are listed below; the winners will be announced later this week. Many are here, walking around the DX.

Keynote speeches, seminars, panel presentations and more are part of the two day event, which started a bit late in the day today, as a main speaker was delayed by traffic – you’d think data, but no – automotive!

Hot trends in digital media, mobile development, multi-player online gaming and yes, making money, will be discussed, tweeted and foursquared over the next couple of days!

It’s all about the future of media, and how tech will affect that future.

Now in its fourth year, nextMEDIA Toronto celebrates the current and future leading players in traditional, digital and interactive spaces.

The CNMAs are seen as the country’s only nationwide competition to celebrate Canada’s most successful digital media companies they are now celebrating their 10th year.

The CNMA gala ceremony will be held December 1 at the Design Exchange. Ben Mulroney will be hosting the awards ceremony.

Meanwhile, the Digital Hot List zeroes in on companies involved in video content, online properties or new technologies. It’s been the launching pad for outstanding cross-platform and online communities, including Bitchin’ Kitchen, ChickAdvisor and X-Weighted.com.

2010 winners will be revealed during the nextMEDIA conference.

2010 CNMA Nominees, Categories and Company Location: Company of the Year sponsored by Deloitte: This award goes to the most ground-breaking Canadian new media company. Start-up or established, it’s all the same category – the winning company will have taken digital media to the next level. Must make a minimum of $2 million in revenue.

Promising New Company of the Year sponsored by RBC Royal Bank: They have a vision, a two-year game-plan, a team of enthusiastic stars and a regulation-sized pool table. Now all they have to do is rise above the fray and make their mark. Award for the “up and coming” company of 2010.

Digital Media Technology of the Year: Awarded to the piece of technology that will most radically change the media landscape. Technology can be software or hardware based. The technology must have been created by Canadian developers working in Canada at the time of its development and launch.

Best in Canadian Culture – Interactive: Awarded to an interactive property which helps diverse canadian communities share their stories and cultural collections-from national and provincial to municipal and local- with new and growing international audiences. Must add visibility to Canada’s cultural experiences through an online exploration of our heritage and culture.

Best Cross-Platform Project: Recognizes excellence in interactive enhancement of a television property on digital platforms. Eligible projects could include games, websites and/or mobile applications associated with a television program.

Best Online Portal: An online video portal that distributes video content via the Internet or mobile technology. Videos can be any length or genre, and may include music videos, movies, news clips, videos, and full-length TV shows. Portals will be judged according to value of content for the audience, brand distinction, functionality and enhanced features such as social networking tools.

Best Kids Interactive: Honouring excellence in the development of interactive platforms for both entertaining and informing children aged 13 and under. Entries include online video, websites, cross-platform media, and products with a digital environment.

Best Online Program, Series or Film: Recognizing excellence in the development of a production that is viewed exclusively by Internet audiences. Entries may include a factual or fictional production of any genre with no transmission on television or theatrical release prior to launch.

Best Mobile Application sponsored by Adenyo: Open to any application that delivers services to a mobile phone. This application demonstrates excellent functionality, innovation, audience reach and frequency, as well as excellence in the use of the capabilities of the mobile medium.

Best Web-Based Game: Innovative games playable in a web browser created by Canadian developers for any market or audience. Entries may include games with either single or multiplayer experiences.

Best Use of Social Media: Demonstrates excellent use of social media for business, arts, or community organizations. Must exhibit innovation in creating and connecting communities.

Best Online Advertising: Excellence in the creation, delivery and execution of online advertising campaigns. Including but not limited to video, gaming, mobile, websites, banners, pop-ups, microsites, email, digital out of home, and rich media. Entries will be judged according to level of user engagement, awareness, and use of medium.

Best Branded Entertainment: Demonstration of content that uniquely positions a brand, product or service within the context of a

Community Campaign of the Year: Excellence in the use of the digital medium for communicating with, advocating for and marketing to communities about social causes affecting the world. Methods of outreach can include all forms of digital media, including websites, mobile, and social technologies.

Online Artist of the Year:

Producer of the Year:

Digital Media Woman of the Year:

Developer of the Year:

Interactive Designer of the Year:

Windows Phone 7 is impressive, but can it compete?