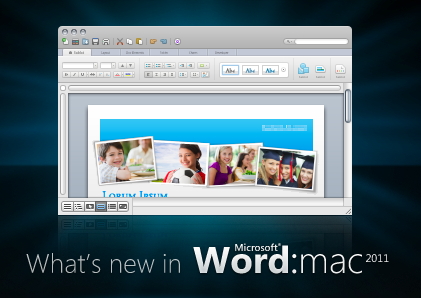 Microsoft Office for the Mac is one of the critical bits of software that many Mac users or even  PC users switching platforms require on their machines. While Apple has developed  iWork  nicely and you can kinda, sorta manage with Google Docs or OpenOffice, many of your business dealings will require  Microsoft Office. The 2011 edition jettisons legacy Mac code, speeds up all the apps in the suite,  finally adds Outlook to the mix and unifies look and feel with the Windows version of Office. Check out our review.

Speed is the biggest and most noticeable aspect of Microsoft Office for the Mac 2011. The older Excel 2008 spreadsheet application, for example, takes around 18 seconds to start up while the 2011 version gets up and running within 4 seconds. PowerPoint 2008 takes around 15 seconds compared to the newer version’s 5-second start up, the same goes for Word where the newer version simply leaves the previous one in the dust.

For users that need to work across Mac and PC platforms, will now notice a more unified look and feel although the ‘Mac’ user interface is still dominant. We used Office for Mac 2011 for two weeks and found it to be substantially faster and smoother than the previous version. The bad news, you need an Intel Mac running OS X 10.5.8 or later for it to work.

Office 2011 also insinuates itself into your Mac’s dock as soon as it is installed so don’t be surprised to see 6-7 new icons unexpectedly cluttering up your desktop. We can’t think of any other software that does this.

The overall look and feel of Office 2011 is more serious and grown up than the bubbly, almost cartoonish look and feel of the older Office suites. Large icons have been somewhat de-emphasized in favour of more integrated controls and more consistent labels that tell you what all those icons; long menus and drop-downs can do from the outset. The result is an intuitive layout that’s easier to learn and use.

The ribbon interface, which has become the cornerstone of the Office look and feel on the PC since 2007, is now fully integrated and on the Mac version. The ribbon is a mixed bag; it does put more options forward rather than hiding them away buried in menus, drop-downs and right-clicks. For some users, however, the logic and grouping of these subsets is a challenge to figure out.

The Formatting Palette, which was prevalent in previous versions and gave users access to varied quick formatting controls is all but gone as everything users might need can be found on the ribbon. You still have floating palettes for certain aspects but they aren’t as integrated as the formatting palette once was.

Office for the Mac 2011 has also implemented some iLife features such as the Media browser that allows quick previews of photos, audio and video files which is convenient.

MS Word is probably our most used application on any platform and we’re happy to report that Word for Mac 2011 has a number of speed and performance improvements that can be felt from the outset.

While Apple’s own writing application, Pages, seemed to be trying to emulate Word, we found that the latest version of Word pays homage to some Pages features. The number and variety of templates that are presented to users when the application is launched, the ability to go into full-screen mode (now a big feature for upcoming OS X Lion apps) and overall a less cluttered approach.

Like with most Office 2011 apps, you are spared the indignity of having to fumble through long menu items and sub-menus as the most common formatting and layout tools are accessible through the ribbon.

As one would imagine, all the fundamental word processing functions that Word has excelled in are still very much present and work as expected except that they are now faster. Still, Word 2011 for the Mac isn’t quite as sprightly as Word for the PC when it comes to certain things like backspacing while deleting text, no biggie but it just seems that Word on the Mac will always be a bit slower than the PC version regardless of hardware specs.

Microsoft Excel for the Mac 2011 sees the return of VBA (Visual Basic for Application) support that was halted in previous versions. You also get support for the Excel Web App and the cloud counterpart manages to replicate all but the most complex features.

There are new template spreadsheets in Excel 2011 and while they’re not as polished or stylish as what you would get with Apple’s Numbers app, they are definitely functional and really, functional is what you want in a spreadsheet application.

Excel 2011 is really fast and general performance is superb and the addition of VBA and Macro capabilities are features that will certainly please users of this highly evolved spreadsheet program.

In terms of presentation software on the Mac, its hard to beat Apple’s own Keynote application which has really coated a new layer of slick on to presentations in terms of themes, transitions and general look and feel.

PowerPoint 2011 seems to have caught up with better charting tools and a neat background removal tool (which can be accessed by other Office apps) easily strips out distracting objects for the creation of compelling slides.

PowerPoint 11 even trumps Keynote by offering the VBA automation and far more sophisticated charting options. While a compelling upgrade, it is hard to see Keynote loyalists shifting to the PowerPoint side. PC to Mac switchers, however, will likely find this environment more familiar and in computing familiarity is synonymous to productivity.

Yes, you read right. We wrote Outlook and not Entourage. If there’s one singular reason for getting the Office for Mac 2011 suite it is for the spanking new Outlook implementation.

The Mac version of Outlook is very much like what we’ve seen on Windows and a much better experience than Entourage that always felt a bit unwieldy. Outlook now uses the Mac OS quick-look for attachments that saves oodles of time.

For Mac users who need to interface with their office Exchange servers will be thoroughly satisfied with all the flexibility that Outlook for Mac offers. Those who are invested in Apple’s iCal are out of luck, at least for now, as it doesn’t seem to be able to sync with that.

Overall, Outlook for the Mac 2011 is a reliable and powerful mail solution that’s quite similar to Outlook on Windows in feel and functionality.

No review of Office for the Mac 2011 would be complete without mentioning Microsoft’s Windows Live SkyDrive Office integration. All the applications allow users the option of sharing their documents by saving them to SkyDriv

The cloud version of Office is quite impressive as it has much of the same functionality the standalone apps have and everything is familiar which makes it a bit less daunting to use than Google Docs.

Saving to SkyDrive is painless and straightforward although we experienced some difficulty resuming work on a Word document we had saved there because of some conflicts that resulted in SkyDrive thinking that we weren’t authorized to access the document.

Cloud integration is a nice-to-have feature but we’re still going to e-mail documents back and forth until this system of accessing docs has been improved.

Still, there’s no denying that Microsoft is making a late but substantial push towards cloud computing and that this was in their plans when they developed Office 2011. It doesn’t feel like a clunky add on but feels natural and somewhat seamless.

Office 2011 offers a lot of overall refinements and updates to what remains the most-used and critical software suite on the Mac for most users. The new interface is smarter and more convenient as less screen real estate is squandered. Users who spend time divided between PCs and Macs will find a more unified, less confusing experience.

Now that Apple has ditched all the legacy code from its OS, Microsoft has followed suit and as a result Office 2011 is leaner, meaner yet more connected office suite.

Canadians get Rogers and Fido to unlock phones for $50