At companies large and small, there’s tons of opportunity for employment.

Across Toronto, and the metropolitan region in which it sits, job openings over the next five years will simply explode.

And if that’s not impressive enough, the real ‘wow factor’ in all this is that digital media, including social networking and mobile development, is the fuse.

That’s the conclusion reached by participants at Technicity, a unique one-day gathering that recently brought together more than 300 delegates from business, government and education so they could assess the city’s current position in the Information and Communications Technology (ICT) industry, and how to ensure the benefits from its expected growth are maximized. 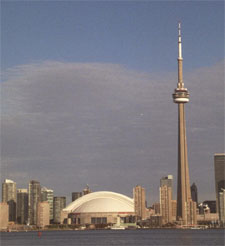 Toronto is well-known for its high tech landmark, an ICT icon if there ever was one!

Because with the rosy predictions of job growth, attendees were told about serious investment, talent and innovation issues that must be addressed for Toronto to remain competitive in the global high-tech marketplace.

Much of the telling information came in Canada’s High Tech Hub: Toronto, a 32-page report tabled at the Technicity event. Prepared by the City of Toronto and a number of select public and private partners, the document provided participants at Technicity 2010 with an overview of Toronto’s ICT sector and some salient characteristics about a city and an industry that seem in constant state of re-invention.

It was introduced by a panel of leading industry-watchers, who contributed to its creation.

Citing concrete examples of success achieved so far, the report stresses the on-going need to strengthen the city’s commitment to research and development, supported by a pool of talent and investment developed to rival any other on the planet.

Toronto’s ICT sector already accounts for revenue of over $52 billion! That’s from 11,500 companies, employing over 161,000 workers.

With more to come.

The trick, as attendees explored in break-out sessions throughout the day, is how to build on that success, how to renew and refresh and grow the Technicity that is Toronto.

More is Better in ICT

The discussion is timely because the need is now. Other countries, as the report noted – and it can add other provinces in this country, if not other areas of this province – are already aggressively pursuing their own ICT strategy

Technicity was the first such event in support of Toronto's high tech industry.

So the event was a good first step, and, as expressed in the opening remarks from Michael Williams, general manager of the city’s Economic Development & Culture department, and Lou Milrad, CEO of the Greater Toronto Marketing Alliance, just the first.

“This will be an annual event if all goes well,” Milrad predicted. “Maybe more often than that,” Williams added.

It was presenter Paul Swinwood, CEO, Information and Communications Technology Council (ICTC), who noted the astounding number of jobs the sector will need.

“Chew on this: the demand over the next five years, taking what’s needed for ICT expansion in Toronto (speaking inclusively about the entire CMA, or census metropolitan area), we will have 68,000 places to be filled.”

That’s the lion’s share of Canada’s predicted overall need for about 170,000 new workers, so how will those positions all be filled?

Of course. Yet from the current curriculum and seat allotment in the schools and post secondary education institutions around town, 5,000 graduates per year come from tech programs. We’ll need more.

Certainly. But the social, economic and cultural integration issues even educated professionals face can be daunting. Boosting women’s 25 % representation in the industry is a challenge, too. We can do better.

Sure. If the current workforce can be even more multidisciplinary than it already is!

“All areas need to be addressed,” Swinwood said plainly. “Which is going to attack directly the need for tomorrow’s supply? We need your help,” he said as a challenge to the gathering.

Brendan Maher could have made a similar challenge on the financial side.

“There are encouraging signs in ICT deals and contracts,” he noted, explaining that mobile software, mobile marketing and digital media were triggering investment and disbursement.

Interestingly, Maher noted the ICT sector is making its fair share of acquisitions, too, with Toronto-based making firms investing some $9 billion in other companies, valued at up to $28 billion.

But, to keep investment activity high and, in fact, growing, Maher said the VC community looks to leverage matching funds from government for the greatest impact. Out and out cash, if not important tax credits, are getting lots of attention in the ICT investment community, he said.

There’s good reason for the attention and the commitment, explained Krista Napier. A senior analyst at IDC Canada, she described her role as keeping an eye on the ‘wow!’ factor in ICT.

She highlighted activity in three distinct areas of ICT – digital media, mobile and social – each of which is contributing to the sector’s expected growth from a $80 billion market to a $100 billion market in the next three or four years, as documented in the report.

That’s a very healthy annual growth rate, driven on the mobile side by a continued adoption of new smartphones. Nearly 30% of all cell phone users now have smartphones, and that’s going to double in a few years, Napier predicted.

Small, nimble companies that are able to adapt their mobile strategy to the growing install base (4.6 units out there now; double that in just a couple of years) will benefit enormously.

Likewise, Napier said, Canadians are going digital (actually, she demonstrated it. Reading from prepared notes loaded onto her iPad, she was one of the few presenters to actually make use of the digital media tools so many others were speaking about).

“Forty per cent of us are sharing media online, accessing newspapers online, streaming music and video,” she declared, adding that over 600,000 digital tablet devices will be in the marketplace within a year. The growth is expected to be in triple digits for the following year, as the digital devices are used not just for personal entertainment, but more and more as important business tools in arenas as diverse as medicine and hospitality.

As we have seen in the past, as we are seeing now, great opportunities lie at the intersection of technology and art.

Meanwhile, social media and online connectivity are all the rage now, and are expected to be so into the future. Napier points out that 75% of Canadians have already participated in or posted to a social network.

Interestingly, over 50% of business has done so as well, using social media to interact with customers, to be an information source for purchases, even to inform hiring and employment practices.

But Napier says that only 16% of those companies use analytics on their social media activities, so there’s a great window of opportunity to help business mature and maximize its use of new technology.

“What’s next is tapping into these market opportunities, Napier concluded. “What’s next is when everyone in the world looks at Toronto as says, ‘Wow!’”

Selling the City, Walking the Talk

That’s the kind of energy and enthusiasm that was expressed throughout Technicity, perhaps no more so that by Renato DiScenza, who delivered an opening and inspiring vision of Toronto as a hub of technology and humanity.

Invest Toronto is the sales and marketing agent for the city and its ICT sector.

DiScenza is the president and CEO of Invest Toronto, Toronto’s own sales and marketing corporation. DiScenza’s task is to sell the city to the world and to position it as the destination of choice for business success, capital growth, professional development and a rewarding lifestyle for all.

DiScenza knows his stuff, and he knows Toronto. He presented a snapshot of what the city has to offer, what is has to overcome, and how it is being positioned and perceived around the world.

“Calling Toronto a global economic hub is very accurate,” he said, “although New York or London are often thought of in that way first.”

But Toronto is already the third largest ICT hub in North America, after Silicon Valley and New York City, he noted. The city is also ranked ahead of all U.S. metropolitan centres in terms of business tax competitiveness (and fifth overall in Canada)

“We need to see our own strength and power,” DiScenza enthused, and referencing the High Tech report and adding that “We should promote ourselves, using the statistics and reports and demographic information we have to boost Toronto and position the city for even greater achievement ahead.

He said Toronto has the talent, the financial soundness, the liveability that make it a global destination.

“Toronto is the last city of hope for business and for people,” he exclaimed. “Despite its faults, it is the place where, in one generation, people can rise and realize social, business and political success.”

Quite a load for city’s shoulders, but the Technicity gathering is confident the weight can be supported, as DiScenza put it, “We can tweet and walk at the same time!”

So, of course, at a gathering like this, websites and social media feeds and new mobile apps are and will be utilized.

DiScenza spoke not only of the dedicated Technicity reference and information website, but also of the “soft launch” of a new web portal from his organization, called Invest Toronto

“It’s not just brochure-ware,” he said, although it does have a lot of information on the city and on this project. “We put our whole engine there, in terms of tools for assessing opportunities, identifying partners, empowering business growth and development.”

He also noted that mobile sites have been and are being developed to support Invest Toronto activities and ICT developments.

The mobile site currently has support for Safari for iPhone and iPod Touch, and Blazer for Palm Pre. “We will be launching a version optimized for BlackBerry 6 Web browser in the very near future,” DiScenza explained, “we’ll have Android coming in January, and we’re making use of more social media like getting Facebook up.”

The report, Canada’s High Tech Hub: Toronto, was created for the City of Toronto in partnership among IDC Canada, KPMG, MaRS Discovery District, Toronto Region Research Alliance, The Impact Group and the Province of Ontario’s Centres of Excellence and Ministry of Economic Development and Trade.

More information about Technicity and Invest Toronto is available through their respective Web portals, and their in-print, online and mobile resource.

So, what’s your tech? What’s your city? What questions, comments or support do you have for Technicity, Toronto and beyond?